This show is worthy of acclaim for being a super-tribute to the world’s greatest entertainer. To earn such boisterous praise, the show germinates from Jamie King, Cirque Du Soleil’s director of Michael Jackson: The Immortal World Tour. His sensitivity towards Michael Jackson heightened when he worked as a dancer on the Dangerous world tour. Welby Altidor, a distinguised director of creation, and Zaldy Goco who designed the wardrobe for This Is It and Michael Jackson: The Immortal World Tour, also bring their craft to full effect. Another positive indicator of this show’s pedigree is the choreographer of This Is It, Travis Payne. With their sparkling backgrounds and many of the world’s best acrobats, dancers and special effects artists, Michael Jackson ONE almost takes Las Vegas musical entertainment to another level and does so without a Michael Jackson tribute artist.

Inspired by the Dangerous album cover, the Michael Jackson ONE/Cirque Du Soleil team customized the theatre with large moving towers and a versatile baroque decor featuring statuettes and rosettes painted on the proscenium. Enjoying the inherent advantages of a massive budget and custom theatre, the show also boasts more impressive technical features than any touring concert or Michael Jackson: The Immortal World Tour.

Michael Jackson ONE Theatre enhances live performances with trolleys for acrobatic artists sailing 100 feet above your head. There are nearly 900 lighting fixtures and 26 projectors displaying video on the stage and around the proscenium for an immersive atmosphere during each tableaux of the storyline. Images on the proscenium, walls, and screens rhythmically blend with the music and performances. The imagery and influence of Michael Jackson’s personality and creativity burst out everywhere. 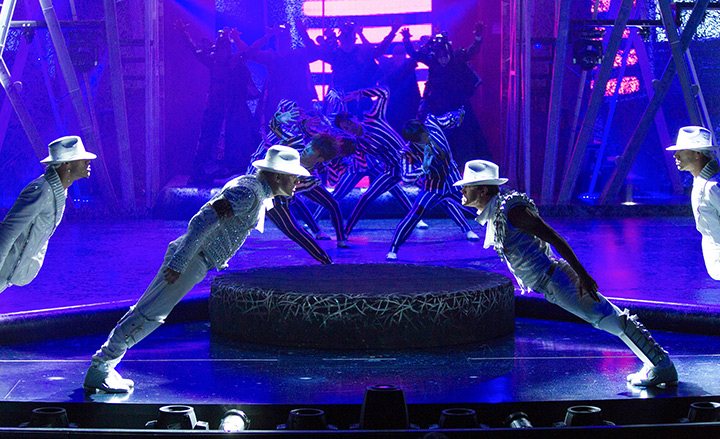 The sound designer, accessing multi-track master recordings, expertly rearranged them in a cinematic fashion, then ornamented to explode with his high-pitched vocals and imply his kinetic energy. The stage, walls and ceiling must be outfitted with one of the world’s most powerful multi-speaker systems. Additionally, each of the theatre’s 1,804 seats has a left, right and center speaker for sounds that fly above, beside, behind and rumble beneath you for an aural experience akin to standing on stage in the middle of an orchestra. You have never experienced Michael Jackson’s recorded music like this.

The world of tabloid news permeates mise en scene visuals with Mephisto, a machine composed of TVs, cameras, flashes, microphones, tungsten bulbs, surveillance equipment and other objects. You’ll quickly discover that malevolent Mephisto is a muse for the paparazzi and tabloid media who haunted Michael.

Michael’s penny loafers, sunglasses, glove and fedora hat are charged with symbolism. Watch closely. Fedoras used in the show come from the same maker as Michael’s fedora hats. Glitter on the Bad guitarist costume was created with the same technique used for the last costume ever designed for Michael Jackson in This Is It. The Dirty Diana costume contains over 7,000 Swarovski crystals that Michael loved. As such, Mephisto and this merry band of misfits subtly represent key influences on Michael’s stage life:

All 1,150 costumes superbly sync with 22 acts in the show. And each act captured my imagination in a piece of Michael’s entertainment world. Video of young through adult-age Michael peppered confident performances of Beat It, Bad, Black or White, Don’t Stop Till You Get Enough, Earth Song, Jam, Remember The Time, Smooth Criminal, The Way You Make Me Feel, and Wanna Be Startin’ Somethin’.

Rising above them to meet my highest expectations were Billie Jean, Bad and Smooth Criminal, each masterpieces of music, choreography and stagecraft. Stranger In Moscow was equally inventive and seductive. Then the magical Man In The Mirror nearly brought the house down. I didn’t want these memorable acts to end. You won’t either!

Medleys are tricky to pull off successfully. Pulling it off seven times in a musical is an order of magnitude harder. For me, the medley approach was a mild drawback for four acts, particularly I’ll Be There/Human Nature/Never Can Say Goodbye. The medley worked well visually, but just as I was groovin’ to I’ll Be There, it shifted to Human Nature, followed quickly by Never Can Say Goodbye. Intercutting these three songs in the time-space of one had my groovin’ genes in a daze. In contrast, my sensibilities welcomed the medley approach for Leave Me Alone/Tabloid Junkie/Too Bad because it perfectly conveyed how Mephisto injected confusion into Michael’s career. There’s a simple fix. I hope the director reduces medleys to three acts, while adding 7-8 minutes to give two more songs room to breath.

Michael Jackson made Thriller such an iconic opus, that I doubt anyone can rise to its level of visual perfection. In Michael Jackson ONE the music, choreography and acrobatics were up to the task, but Thriller mise en scene never matched their crescendo. Since no creative expense was spared, I can’t fault the Michael Jackson ONE/Cirque Du Soleil team for trying.

Breaking barriers decades before the rest of society, Michael Jackson left us with a final message incorporated in this satisfying show. “We’re putting love back into the world. To remind the world that love is important. To love each other. We are ONE.” If you’re a fan of artistry and one-world message of Michael Jackson, see this spectacular once for style and twice for love. 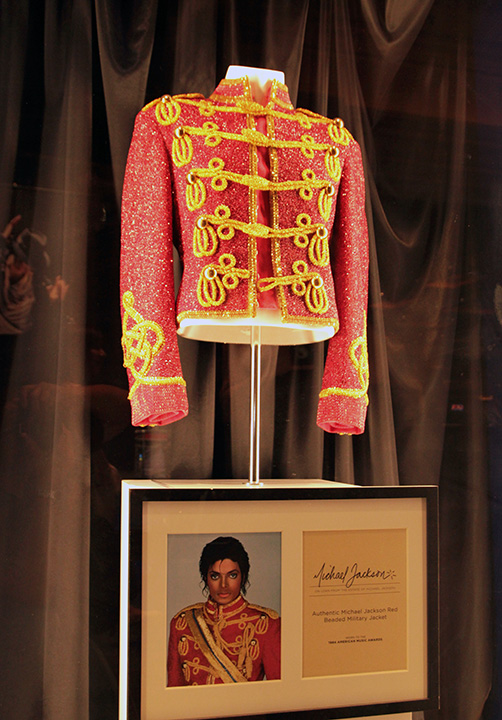 A Michael Jackson Store outside the theatre features an outstanding range of gifts for every budget.