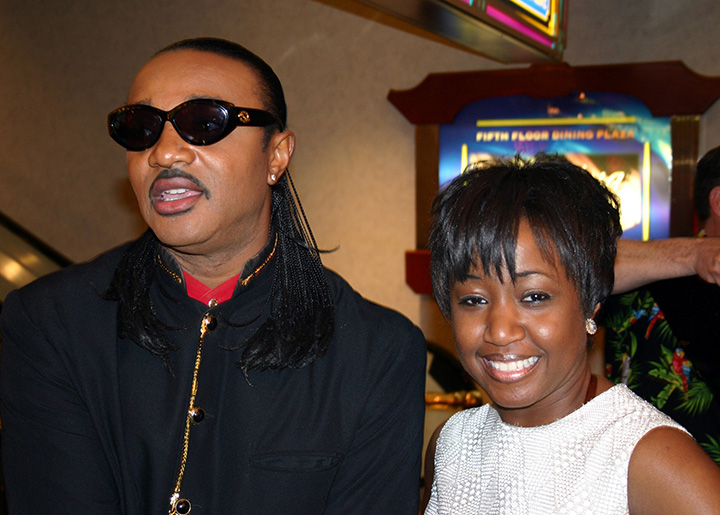 by Thomas Dorsey of SoulOfAmerica

Legends In Concert is neither over-the-top, nor boring. Instead, it finds a happy medium as a choice Las Vegas variety show. Perhaps that is the reason it’s the longest running show of its kind in Las Vegas. The set design is rather sparse by Strip standards, but they seem appropriate for the show. Thankfully, no stage wires distractingly transport artists from the heavens to the stage. Yet production values are high and the band is diverse, a wise decision given the range of music they cover from R&B, Rock&Roll, Pop, and Country. The theatre seems amply scaled for the production as well.

Some performers look like celebrity twins. Others are close enough, but sound and dance like them. At the time of this review, Denita Asberry impersonated Aretha Franklin’s booming dynamic range and soulful vocalizations. As incredible as it seems, she came closest to matching the original artist. She’s that good!

Bobby Brooks is a dead ringer for a 30-something Stevie Wonder at the piano. His talking voice also sounds like a replica of Stevie, but in all other ways, no one comes close to the real Stevie. Rest assured though, Booby will have you waving your hands and dipping your shoulder as he charges through the legend’s tunes we know and love.

The Elvis Presley tribute artist looks like he could be Elvis younger brother. After the show, patrons of all stripes took pictures with him.

If not for the Aretha Franklin tribute artist, the Righteous Brothers tribute artists would have stole the show. They don’t look much like the real thing, but they sure sound like it with each baritone to falsetto note. You will want to hear more of them.