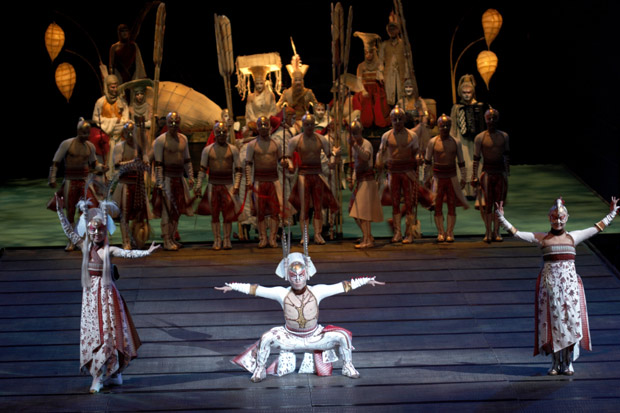 Darkest of all Cirque du Soleil shows in Las Vegas, Ka is an unprecedented ballet of 360 degree movement. But don’t confuse Ka (pronounced “caw”) with a ballet you see in New York or Paris. It is radically beyond them and a mightier treat to experience.

The name Ka is inspired by the ancient Egyptian concept of the “Ka”, which is a spirit that accompanies every human being through this life and the next. In this show, the Imperial Twins and their ka journey pass fantastic creatures, sea storms, epic battles and evil villains in their quest to reunite.

Ka has Cirque du Soleil’s impeccable attention to detail, acrobatics, swordfights, dance and trademark artistry, but its spry storytelling seems a hair sharper than other Cirque shows, provided you stay focused on the storyline. Every scene contributes to and integrates well with the driving pulse of the story — Imperial Twins separated by distance and war.

Ka is arguably the most innovative and thrilling stage production on the planet. Though it seems impossible for a Cirque du Soleil show, Ka’s custom-built theatre is a bigger star than the performers, but not in a way that dwarfs them. Instead, the Hollywood sets, daunting stage elements, pyrotechnics, and other technical wizardry endow performers with superpowers. One epic battlefield scene is so incredible, you will not believe your eyes. Lest you think Ka is a “testosterone ballet”, be assured that all scenes drip with imagination, colorful costumes, exquisite dance with engaging storytelling at all levels. This groundbreaking ballet is as beautiful as a hummingbird in flight, yet as deft as a ninja’s sword.

The music of Ka nicely amplifies the story, but is not quite as memorable as O or as surreal as Mystere. Given Cirque du Soleil’s history of gradual refinement over time, one can anticipate that the music of Ka will be as compelling as that of O, but not reach the command performance of Mystere. But Ka does not need to reach that level musically.

Ka is far too expensive to produce anywhere else. The best Broadway shows are happy to earn $40 million and their sets cost less. Ka cost $135 million to produce. Like O, this show depends on millions of free-spending visitors each year that only Las Vegas delivers. Every seat is great for viewing. If you like this kind of technical artistry, Ka will be your favorite Cirque du Soleil show and well worth the highest price in Vegas.