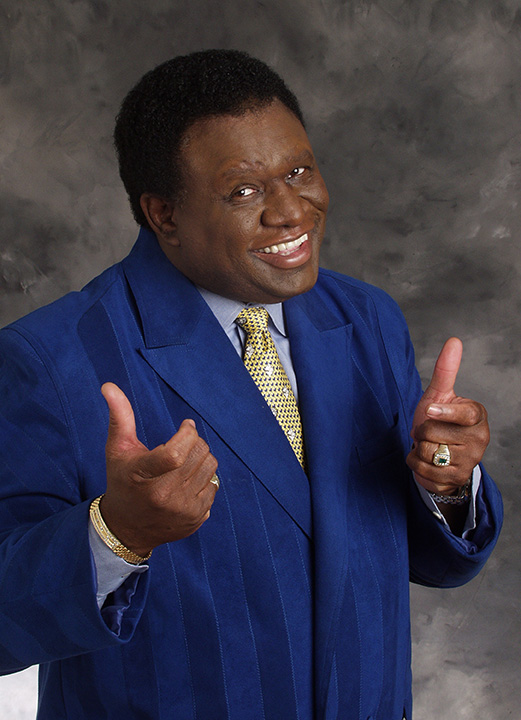 by Thomas Dorsey of Soul Of America

George Wallace was a staple performer on the Las Vegas Strip. His gig at the Flamingo ended not long ago. But this review is mostly pertinent for his touring act.

George demands props from the moment a hulking voice announces his uncensored presence on stage. Witty, taut, rapid-fire and full of adult-only entertainment value for about one hour and fifteen minutes, this is a naughty side of George not seen on his Tonight Show and Oprah appearances.

Without giving away much of his “I Be Thinkin” act, its fair to say that George fully employs a biting tongue and unorthodox view of topical matters of the day. The effect is a comedic sledgehammer, that also makes you think later that night … hummmm, George may have had a point there. He’s the funniest Black comedian performing regularly on a national stage. On nights when he’s at the top of his game, George can be the funniest man in America. If there’s a negative, the cheesy audience giveaways seem grafted onto the show. It’s not necessary, when the laughs are enough.

You’ve heard the stories about comedic insults lashed on patrons in the front rows. That aspect of George’s show is atypical, as long as each patron goes along with the gag. George seems to like spreading gags upon himself and across the room with equal gusto. So here’s a useful tip to front row patrons — let sleeping dogs lie. If he caps on you, take it and smile. He won’t heap it on. But if you resist, it will be a long night for you and a laughed-so-hard-I-cried night for everyone else!

In terms of personality, George is a very approachable guy, who shakes hands, signs autographs, and takes pictures with patrons after the show. Be sure to bring your camera. George won an American Comedy Award as “Best Stand-Up Comedian,” after being nominated four years in a row. If you want to Blue Man in Las Vegas, there’s a great show for it. If you want to see a Black Man …