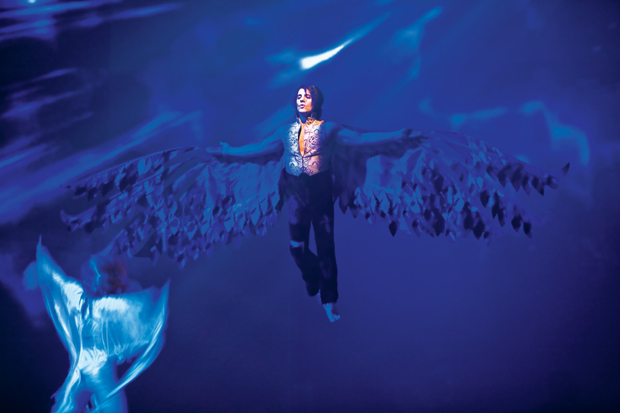 With ushers in boller hats and tennis shoes, gold leaf statues, blood red drapes, mysterious puffs of smoke, surreal entrance sounds, Criss Angel Believe has the haunting creativity and evocative touches we’ve come to expect of Cirque du Soleil production values in Vegas. Not a misplaced costume stitch or false dab of makeup anywhere. Would the show live up to the potential of its magnificent Cirque heritage and the high standards of master magicians on the strip? The answer to the question partly depends on the growth of Criss Angel, a David Copperfield meets Gothic-Punk wunderkind.

For those who did not see The Prestige movie, a magical illusion consists of three acts. First, the Pledge is the setup when a magician turns to his audience and introduces something ordinary. Second, the Turn is when the magician turns from his audience to induce the extraordinary portion of the illusion. Third, the Prestige is when the effect of the illusion is produced to the amazement of the audience. With that primer stated, its fair to say Criss Angel puts on a mixed show where he executes all three acts to perfection and other times where the 2nd or 3rd acts are clunkers.

Lets begin with the clunkers. Most of the early illusions Criss performs are cliche. People don’t pay Cirque prices to watch a trained dove fly, pulling rabbits out of hats and standard audience misdirection tricks. If you going to make Pledges with those routine illusions, then you better deliver a better Turn and Prestige. It did not help that a fantastic Pledge and Turn of one illusion reminded patrons of a scene in The Prestige movie. Unfortunately, the Prestige in this case was a let down. Many patrons deflated their appreciation for the rest of the show.

Then just as Criss Angel got his mojo working for all three acts of original material, an aerial acrobatics session interrupted. It was as though someone said, “now we must graft on a Cirque du Soleil moment.” Don’t get me wrong, the aerialists are often astonishing. The director just seemed to have bad timing for the Cirque moments. I would rather the director let the Cirque elements gently flow with the magic rather than compete with or interrupt it. Just my opinion.

Now the good news. Criss performs three or four mind-blowing magic acts – some of the best Turns and Prestiges ever performed in Vegas. As a person who can pick apart most magic acts, I was stunned when I saw Criss Angel walking on air without visible wire supports, and how he made someone disappear without the routine smoke and trap door effect. Pure Magic! Then Criss Angel exploits silhouette magic scenes in a way that says, watch out Lance Burton and David Copperfield, this guy has the potential to match your master magician finesse. Its also noteworthy that Criss Angel performed one of the most “dangerous something cut in half” illusions I’ve ever seen and for the reason, it may be too scary for kids.

Two take-away impressions to share about the show. One is in the hands of Criss Angel, the other in the director’s hands. The show opened in September 2008 to lousy reviews, but month by month, Criss Angel is replacing cliché acts with more of the jaw-dropping, head scratching stuff he is famous for. In other words someone who sees Criss Angel Believe in December 2014, is seeing a better vintage show than in December 2008. Such a show progression would not be atypical. The second point is the director needs to better integrate Cirque du Soleil moments that compliment the soul of this magic show. The audience should not have to guess, is it a magic show plus Cirque du Soleil or a magic show complimented with Cirque du Soleil? The director better decide soon, if he wants more patrons to believe.