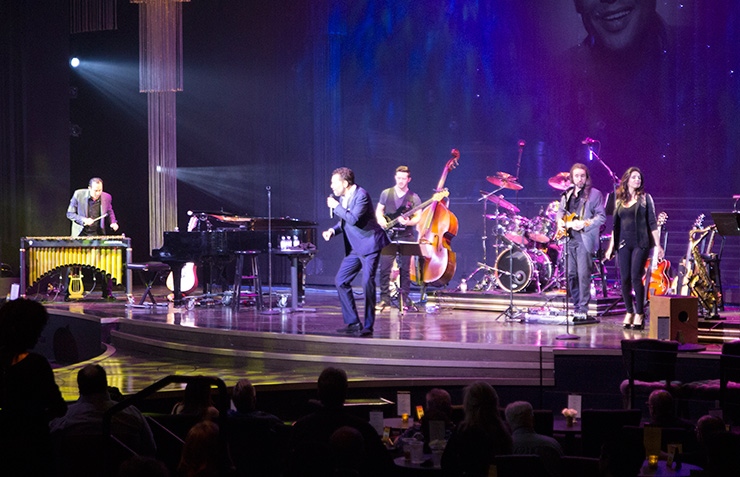 Many artists profess the excitement of small theater shows. But few master the art of cabaret theater entertainment. Flourishing in the shadow of legendary Harry Belafonte, Clint Holmes has also mastered the art of cabaret theater. Based on life’s stories between the lines, he humbly delivers a show with punch, emotional nuance and most importantly, modern relevance.

Drawing heavily on the backstory of his life, Clint Holmes calls his show Between The Lines. The son of an African-American jazz musician and English opera singer, musical talent is in his genes. Once Dad, invited his 6-year-old Clint to jam sessions, his life direction became show business. Honing his vocal skills and stagecraft over the years, Clint recorded a Billboard hit record in 1972-73, became the announcer for The Late Show Starring Joan Rivers, hosted BET-Honda Campus All-Star Challenge for many years, and was a regular on the Las Vegas strip from the 1970s to his last Harrah’s show in 2006. A grateful Harrahs renamed its main showroom after Clint Holmes.

Losing a long-time show on The Strip must be humbling. When visitor demographics change, The Strip humbles everybody. Unbroken, he continued nomadic performances in Vegas and elsewhere for several years. When Las Vegas’ Smith Center for the Performing Arts opened in 2012, Clint became a regular performer in the Cabaret Jazz Theater. He also remained a mentor to younger talent in his band that held side gigs in local R&B and Jazz groups to keep their talent on point. He managed to be voted Best Male Singer by the readers of the Las Vegas Review-Journal for six consecutive years and Best Singer by Broadway.com in both New York City and Las Vegas in 2014.

After a series of life challenges, Clint resumed performance on The Strip in August 2016. He combined old band members with fresh talent again. It was like someone rubbed a magic lamp and the genie reappeared. Clint opened with an inspirational homage to his father, where every twist of torso and bend of knee amplified heartfelt love and thanks for Dad. The magic was, he made you feel the same way about your dad. For many, tears flowed.

Like the deft footwork of a Kobe Bryant turnaround jumper, he gracefully shifted tempo and moods from one song to the next. Stop This Train, At The Rendezvous, The Perfect Trance and All Of Me (by John Legend), still resonate with me and likely will for you. Moreover, most Between The Lines songs sound the same as those on his latest album, Rendezvous. The difference being, his album contributors included Dee Dee Bridgewater, Dave Koz, Patti Austin, Jane Monheit and the Count Basie Orchestra.

Okay. I confess that I’m a long-time fan of Clint Holmes music and showmanship. But there’s more to the show. The size and lay-out of redesigned Palazzo Theater is a Best Supporting Actor. A bit smaller than his Harrah’s theater, it is just the right scale to air strings, wind instruments and the soaring voice of young Noybel Gorgoy.

Remember the name Noybel Gorgoy. This Cuban soprano seems destined for stardom as well. That too is the mark of great entertainer. A legend grooms the next generation of great performing artists.