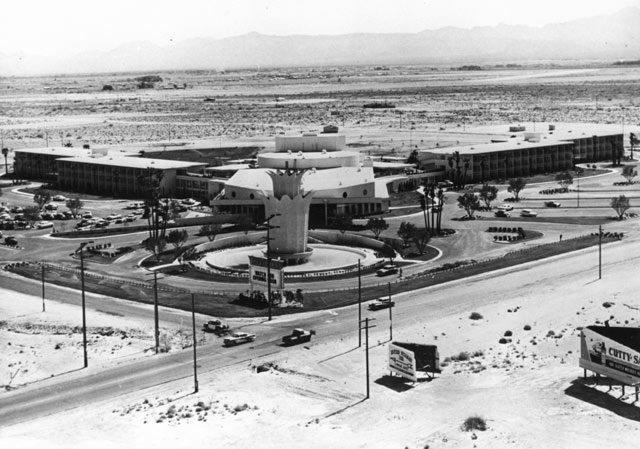 Paiute Indians first lived in what we now call Las Vegas. Mormon missionaries arrived in 1855, attempting to convert Paiutes to their religious beliefs, then abandoned the area in 1858. The City of Las Vegas was founded in 1905, when a railroad company set up a whistle stop between Los Angeles and Salt Lake City due to its modest water supply.

In 1906, Golden Gate Casino opened on Fremont Street, it was the first to locate downtown. Sensing residential development opportunity, the railroad company auctioned off land to settlers. In 1911, when it received a city charter, Las Vegas town had a population under 1,000.

African Americans began arriving in Las Vegas in the 1920s to work for Union Pacific Railroad. Sadly, the railroad first hired them in as strikebreakers, which set a damaging precedent for race relations. The Majestic Theater aslo located downtown, where the Golden Nugget Casino is today, was integrated in the 1920s. Several African Americans even owned property downtown. Despite the rocky start, demographics eased rce relations. With a relatively small number of African Americans and few European Americans from the South in the 1920s, non-strike related discrimination was mild.

In 1929, the U.S. Congress authorized the Boulder Canyon Dam Project using $165 million in federal tax dollars. Construction began on Hoover Dam in 1931 during the Great Depression. Men of all colors came for work. Discrimination preserved most of the hiring to Whites, many from the South. Even with the NAACP lobbying to end hiring discrimination on this federal project, only 44 African Americans were employed among the 5,000 hired. Furthermore, they had to commute 26 miles daily from Las Vegas to Boulder City or sleep in tents along the way. Most of them settled in downtown Las Vegas.

Two more developments in 1931 set the stage for growth and changed race relations for the worse. Nevada legalized casino gambling and passed a quickie divorce law provided one resided in the state for six weeks. The short-term white residents stayed at “dude ranches” on The Strip. In 1932, the Apache Hotel opened at the corner of Fremont and Second Ave downtown (now Binion’s Hotel & Casino).

Sometime after prohibition ended in 1933, mobster Benjamin “Bugsy” Siegel muscled in on the honky-tonk saloon gambling parlors downtown, probably looking for a revenue stream to replace bootlegging back East. Though Hoover Dam opened in 1935 to supply electric power for air conditioners and the largest man-made water supply in North America, Las Vegas’ population only passed 8,400 by 1940. But laws and ethics changed to introduce discrimination that attracted more European Americans to the casinos while keeping African Americans out of them, except as housekeeping staff.

Las Vegas’ first casino resort, El Rancho, opened in April 1941 just outside city limits. This location on Highway 91 became what we now identify as the top of “The Strip’” at southwest corner of Las Vegas Boulevard and Sahara Avenue. Owner Thomas Hull intended that the 107-room, 66-acre, $425,000 theme resort give people an overnight respite from the long desert drive between Los Angeles and Salt Lake City. The casino was an afterthought. Hull added 160 acres and more rooms, but sold the property one year later.

On 7 December 1941, the start of World War II changed everything. Nellis Air Force Base expanded and a magnesium company opened nearby to supply the Defense Department. With so many people unemployed due to the Depression, Las Vegas’ had no problem attracting workers. Business was good at the casinos. While visiting Las Vegas in 1942, Carol Lombard, wife of Clark Gable, died in a crash aboard a Howard Hughes plane shortly after takeoff from Las Vegas Airport. Gable, then Hollywood’s biggest star, left LA to claim her body. He stayed at El Rancho, even as the press hounded the area for details. Although morbid when you think of it, Lombard’s death put Las Vegas on the map for celebrities.

Howard Hughes became an El Rancho regular as the casino and entertainment expanded. Hughes would often gamble more than $100,000 at a time, trying to win the casino from its owner – unsuccessfully. In the same year, the Last Frontier became the second casino resort to open on the Strip. Equally important, the large El Cortez Hotel opened downtown, with another investment by Bugsy Siegel, who had many years to germinate the idea for his signature achievement to come in Las Vegas. In 1957, the Tropicana opened at the corner of Las Vegas Blvd and Bond Road, since renamed to Tropicana Avenue.

Segregation ruled the day in Las Vegas until Sammy Davis, Jr, with help from Frank Sinatra, integrated the casinos. His door-opening act was followed by 1960-61 NCAA negotiation with casinos and followup verification to completely open the casinos.

Today, a large bank account opens anyone to all that Vegas has to offer. Of course that leads to a smaller bank account afterwards.