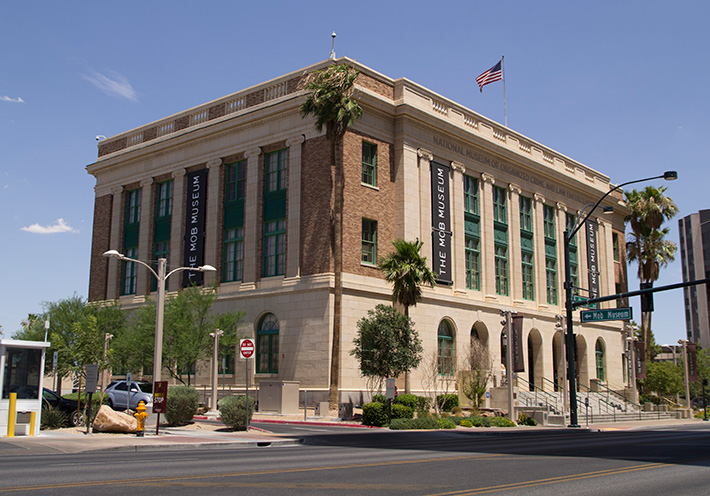 Fremont Experience
DESCRIPTION: Glimpse Las Vegas before The Strip emerged as Las Vegas’ dominant attraction. Many gamblers prefer these dowdy, but nonetheless charming Golden Nugget, Four Queens, Las Vegas Club, and Binion’s Horseshoe for their slightly better winning odds. That compensates for not having Strip appeal. Vegas Vic, the Cowboy and Vegas Cowgirl provide the neon eye-candy seen on many postcards. Onlookers in this pedestrian-oriented 3-block area take priority over automobiles. Watch a several minute long light show projected on the overhead canopy. It begins on the hour once it turns dark and continues until late each. morning. It’s pretty cool!
ADDRESS: Fremont Street between Main and 4th Streets, Las Vegas, NV MAP
PARKING: nearby parking and validation at your casino

Fitzgerald’s
DESCRIPTION: The first African-American to own a casino in Las Vegas, Don Barden, purchased Fitzgerald’s from prior owners who established a Luck o’ the Irish theme. In back, its 34-stories feature 624 deluxe rooms, so its popular with mid-size convention groups. A small section of the casino presents black cultural art. If you are going to gamble in Las Vegas, this a great place to enjoy some of the loosest slot machines and a Old School R&B performers in the lounge.
ADDRESS: 301 East Fremont Street, Las Vegas, NV MAP
PHONE: 800-274-5825

4 Queens
DESCRIPTION: Its landmark marquee is one of the best loved in Vegas. Like most downtown casinos, it is known for slightly more favorable chances to win. The twin 19-story towers host 690 rooms, many of which are Jacuzzi-suites. Non-smoking rooms and ADA-compliant rooms are available. Dining options at 4 Queens include Magnolia’s 24-hour service, the classy Hugo’s Cellar, and Chicago Brewing Company.
ADDRESS: 202 East Fremont Street, Las Vegas, NV MAP
PHONE: 800-634-6045

Binion’s Horseshoe
DESCRIPTION: Located downtown, it is known as a card player’s casino and one of the top Poker spots in Vegas; one of the smaller Vegas hotels, it has only 366 comfortable rooms; one of the its best features is the 25th floor roof top pool that gives 360 degree views of Vegas – a greet place or a cocktail. Located on the 24th floor, Binion’s Ranch Steakhouse offers a spectacular view of downtown while dining.
ADDRESS: 128 East Fremont Street, Las Vegas, NV MAP
PHONE: 800-937-6537

Golden Gate
DESCRIPTION: Established in 1906, Las Vegas’ most historic casino and smallest hotel on Fremont Street has only 106 rooms; entering from the Fremont Street Experience with its nightly light shows you almost feel like you walked back in time; this casino hotel has a classic décor and is proud of it; the 99 cent shrimp cocktail in the San Francisco Shrimp Bar is the best in Vegas; plenty of veteran players love the gambling action in its friendly environment
ADDRESS: 1 East Fremont Street, Las Vegas, NV MAP
PHONE: 702-385-1906

Palms
DESCRIPTION: A beach-themed casino resort that attracts sports gaming clientele and sports fans to watch games between partying and gambling; that figures since the Maloof Brothers are known for being hip; this $265-million resort is also known for male and female eye-candy lounging around its magnificent pool; go to the 55th floor to dance and take in the 360-degree panoramic city view; movie theaters are also on the premises
ADDRESS: 4321 West Flamingo Road, Las Vegas, NV MAP
PHONE: 800-297-0144

Orleans
DESCRIPTION: A New Orleans theme resonates among its 1886 nicely appointed, over-sized rooms and suites with separate sitting areas; spectacular views face the Las Vegas Strip or mountain panoramas; features 3,000 slots, video poker, keno, and your favorite table games, plus 10 restaurants and a free shuttle to its sister property, the Barbary Coast on the Strip; known for booking a wide range of entertainers in the Orleans Arena, including Tower of Power; add a bowling alley and 18-screen movie theater on the premises and you have an excellent Strip resort experience for less than prices on The Strip
ADDRESS: 4500 West Tropicana Avenue, Las Vegas, NV MAP
PHONE: 800-675-3267

Las Vegas Hilton
DESCRIPTION: Attached to the Las Vegas Convention Center, it has all the business amenities you’d expect from regions prime convention hotel — elegant accommodations in 3,000 well-designed rooms and suites; includes a number of fancy gift shops and a Kidz Clubhouse; Star Trek: The Experience® features the largest assortment in the galaxy of Star Trek memorabilia for look-only and purchase; the wide assortment of restaurants include The Buffet, Benihana, Hilton Steakhouse, 888 Noodle Bar, Garden of the Dragon and more to satisfy every palette; 2006 acts coming include Donna Summer and Johnny Mathis; Las Vegas Monorail conveniently connects the resort to The Strip
ADDRESS: 3000 Paradise Road, Las Vegas, NV MAP
PHONE: 888-732-7117