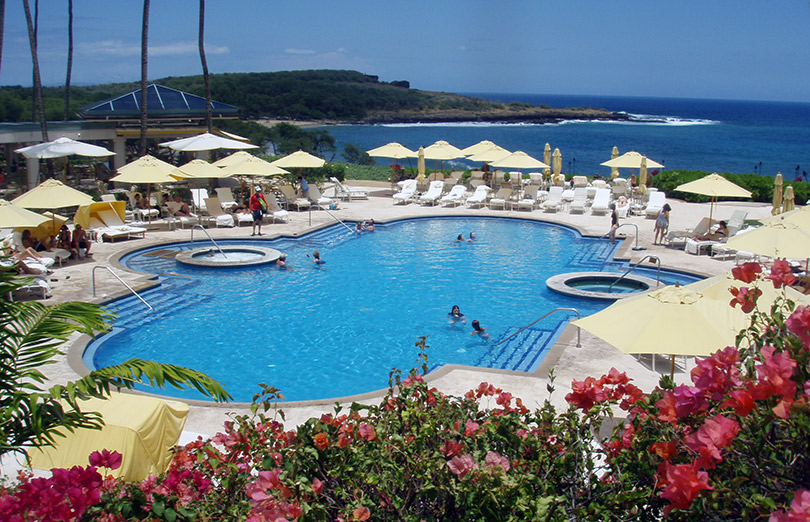 Lana’i Hotels include two Four Seasons properties and the less pricey, homier Hotel Lana’i. A shuttle bus provides convenient transportation between the airport, the hotels and the harbor for whale and dolphin watching. Guests of either of the Four Seasons hotels have access to the amenities of the other, including the pools and health club.

Four Seasons at Manele Bay
“Aloha, Ms. Valentine. How are you this morning?” The hotel employee who offers this greeting has never laid eyes on me before. I’d come to the front desk to ask a question, and during my walk to the lobby, no fewer than three staff members – neither having heard the others – greeted me by name.

Such is the personalized attention provided by the Four Seasons at Manele Bay (pronounced Ma NEL lay). Nestled in a curve on the island’s south shore, Manele Bay combines refined sophistication with the fun atmosphere of a beach resort. Down the corridor from a Surf Shack for the teen set is an elegant great room outfitted in an exotic Asian motif.

Wall murals of Chinese emperors, polished sculptures of Thai soldiers and screens made from Japanese silk adorn the space, where sofas and chairs are comfortable enough to induce mid-afternoon snoozing. Ceiling-high art deco arches frame the pool area, with glimpses of Pacific blue in the background.

A path beyond the pool wends around to Hulopo’e Beach. The concierge desk there can satisfy all your needs, offering lemonade, towels, umbrellas, beach chairs and snorkeling equipment.

Past the beach is a half-mile trail leading to Pu’upehe (Sweetheart) Rock. On the way, I notice Kevin Humphrey, a brother barbecuing with family and friends. An Atlanta native, Kevin and his wife have lived on Lana’i for more than a decade, and he raves about his island home.

“Anywhere you go is going to be more stressful than here,” he says. “This is what we do every weekend.” He gestures to his 10-year-old twin daughters body surfing in the waves. “They surf, and they swim. This is all they know.”

After visiting for a while, I continue my walk past tide pools where parents and toddlers splash in crystal clear water. At the edge of a bluff, I sit to admire a sandy cove sided by vertical cliffs that look like stacks and stacks of compressed burgundy stone.

Yards from the cliff is Sweetheart Rock, an enormous boulder jutting from the ocean. According to legend, a jealous warrior hid his beautiful wife, Pu’upehe, in a cave at the bottom of the cliff while he went off for supplies. When he returned, a storm had hit and she drowned. Grief-stricken, he buried her at the top of the rock before jumping to his death.

Despite the sad tale, there’s a calmness that comes from watching the high waves break against the rock and pound the shore.

Back at the resort, only a grassy knoll separates my well-appointed room from the pool. With mid-day temperatures hitting 90 degrees, I choose to dive into the solitary waters the next morning at daybreak and swim laps as the sun rises.

Next, I head to the fitness center for a Core Strengthing workout. The instructor leads a class of two – me and a dewy-eyed newlywed from Italy – through gut-busting ab routines blended with calming yoga.

Though prices are high at the resort’s Hulopo’e Court restaurant, the food proves the adage that you get what you pay for. I have a New York steak, flavorful and impossibly tender. It’s the best steak I’ve eaten and I’ve had beef in Argentina. The service is attentive but not intrusive. What a nice touch that the wait staff brings an array of magazines when they see that I am dining alone. 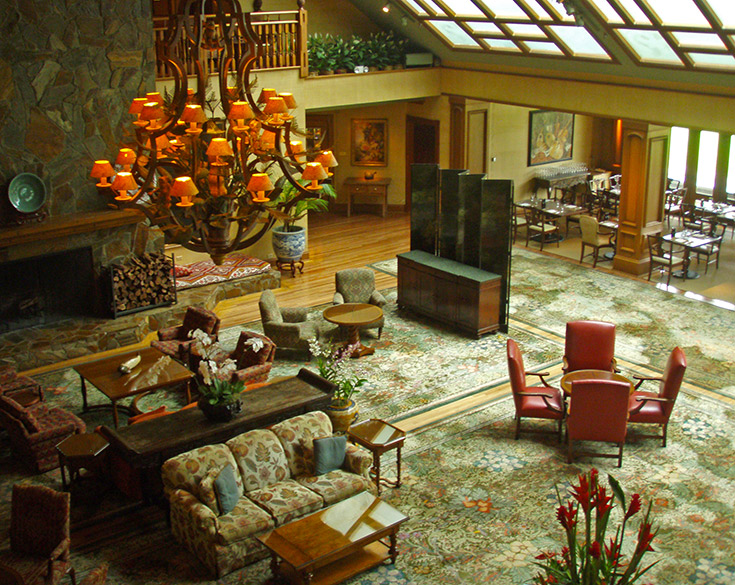 The Great Room at Lanai Four Seasons at Koel’e; (c) Soul Of America

Think of a stately English Country lodge, surprising in its grandeur and size. With its gabled roofs and wide verandas, Ko’ele is reported to be the largest wooden structure in Hawaii.

When I step off the shuttle bus, I’m not surprised that the staff greets me by name. I follow a smiling gentleman through the foyer and into a great room that is jaw-droppingly grand. While my check-in is arranged for me and after I’m offered a warm towel for my hands and face, I sit to marvel at the interior.

Cords of cut wood anchor immense stone fireplaces, one at either end of the room, and muted sunshine streams through skylight windows. Wrapped in shades of brown, green, orange and burgundy, the room gleams with polished surfaces of oak and mahogany. Overstuffed sofas and leather chairs form conversation areas next to accent tables holding wooden carvings and pots of orchids.

Just beyond the floor-to-ceiling windows in the back is a lush garden that looks transplanted from a fairytale. Geometric hedges line impeccably manicured lawns, Asian sculptures sit on tiled foundations surrounded by blossoming plants, and a stately gazebo stands next to an Olympic-sized pond that reflects red and pink flower bushes – all against a background of verdant forest.

Later, I enter my room, realizing what a full day I’ve had: swimming, strength conditioning, clay shooting and horseback riding. I am beyond exhaustion and appreciate the deluxe suite’s serenity, with its calming yellow walls, goldenrod and blue roman shades and country plaid sofa and chairs. The bed is so comfortable that I’m asleep almost before climbing between the designer sheets.

During my visit, I dine in The Dining Room, the lodge’s restaurant, which looks like the formal living room of an English manor. In contrast to the old-world setting, the meal is contemporary. My Beef Tenderloin comes with a delicious Oxtail and Sweet Maui Onion Ragout. The resort also features a music room and a library and is the site of a regular performance series, which hosted the African Diaspora Dance Troupe Badenyaa in April 2011.

Hotel Lana’i
If your wallet doesn’t lend itself to a Four Season’s experience, the Hotel Lana’i’s a quaint, comfy alternative. Just a mile down the road from the Ko’ele Lodge, this charming property sits at the crown of the island’s tiny downtown. As a guest, you are mere yards away from a half dozen restaurants and cafes.

Formerly “The Lana’i Club House,” Hotel Lana’i was built in 1926 by James Dole for guests and management employees of his Hawaiian Pineapple Company (which became Dole Foods). The hotel is just west of Dole Park, a pine tree-lined lawn space that serves as town square for Lana’i City.

The bright guest rooms of Hotel Lana’i are small, but with quilted bedspreads and ice chests in the closet, they remind you more of a cozy B&B than a hotel. I wake up to a continental breakfast of fruit and pastries served on the sun-lit front lana’i (meaning patio).