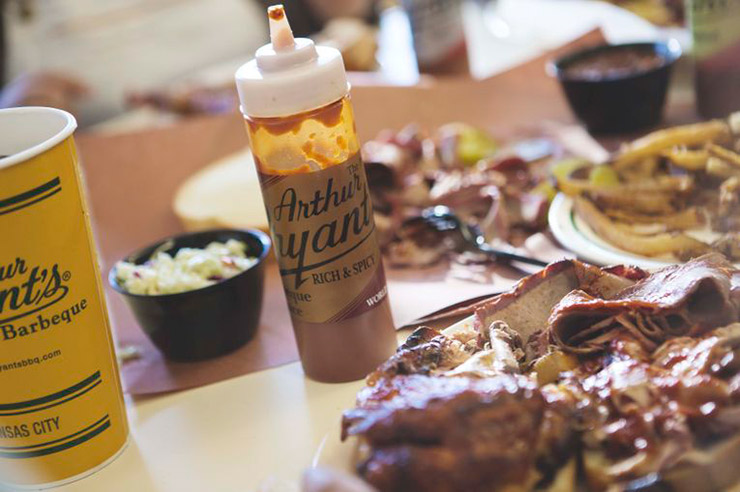 If you think of steak and barbecue, you must add Kansas City to the same sentence. Local lore says that Kansas City Barbecue began when the stockyards opened in 1870, thereby insuring Kansas City would rival Chicago as a major distribution center for beef. With such close access to fresh beef on the prairie, local restaurants make sure that Kansas City’s reputation for great steaks is ever present. They serve it a dozen ways, at great prices and healthy portions.

Someone unintentionally left beef ribs over an open pit too long. The flames weren’t hot enough. Then the Devil made ’em invent barbecue sauce. The truth or not far for it is Kansas City Barbecue is slow smoked over hickory for nearly 24 hours to obtain that deep roast flavor. This process was first credited to Henry Perry in the 1920s. At a makeshift home inside a streetcar barn at 19th & Highland Streets, Perry slow-cooked beef ribs over an outdoor pit and experimented with barbecue sauces.

Delicious taste, aroma and no doubt money, soon attracted admirers like Charlie Bryant, George Gates, and Otis Boyd. They learned the basics of Perry’s technique and in typical American fashion, each set out to create their own style of Kansas City Barbecue with secret sauce, which is brushed on before serving.

One of Kansas City’s most famous barbecue restaurants began with the Bryant family. When Charlie Bryant retired in 1946, his brother Arthur bought the business. Though Bryant’s first operated at 18th & Euclid location, a few years later it moved to its present location in a distribution district at 18th & Brooklyn. And now the Gates Family, with its entrepreneurial spirit, has taken the business concept beyond restaurants into developing an entire neighborhood.

The Boyd family tosses its hat in the ring for most flavorful ribs as well. When visiting its best not to express a preference for one over the other. Take the easy way out and just say, “Kansas City has the world best beef barbecue.” Remember to add the word “beef” so you don’t offend the pork barbecue denizens of Memphis.