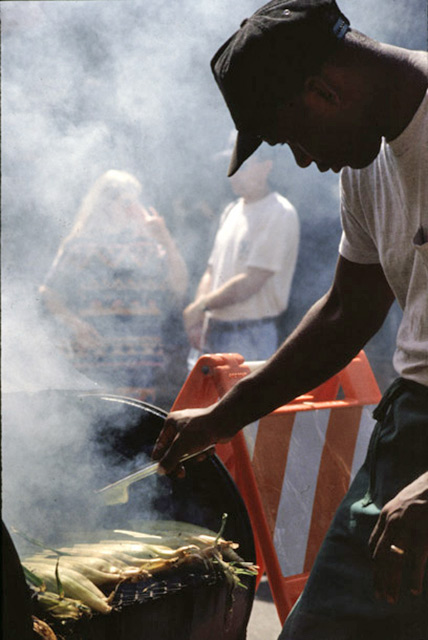 Jackson has two dining traditions that every visitor should explore: Soul Food & Barbecue. It is not uncommon for people of all stripes to visit a Soul Food restaurant or take-out Barbecue joint. Sometimes you must have those grits, eggs and flowery biscuits. Or you “needs some” pit-roasted, slow cooked barbecue that dances across your taste buds on a satisfying journey to you stomach.

Currently, the Soul Food restaurants are more prevalent in Jackson. But the barbecue kings show their stuff at Jubilee Jam, Mississippi State Fair and various other warm weather events. The great barbeque chefs have the longest food lines.

Soul Food originated in the South on plantations, when our enslaved ancestors had to make due with a few pigs per season, poultry raised on the plantation, rabbits they could catch. The pigs had to be salted and smoked for longevity. Rice and peaches were cash crops common to Mississippi, Alabama, Tennessee, Georgia and South Carolina plantations where the rain and soil conditions were optimum. Along with potatoes, greens, corn, carrots and okra grown for the plantation, they became staples of the everyday diet. Nothing, and I mean nothing, from the pig was wasted. Down on the farm, “Babe” was always someone’s tender pork roast!

To date, no one knows exactly where the practice of barbecuing began, but certainly pork barbecue became a Southern tradition long before beef barbecue. On Southern plantations, there simply weren’t many cows to eat. Most Midwest cattle went to Chicago, Kansas City, St. Louis, Dallas and Houston stockyards.

Though beef occasionally made a welcome appearance, pigs, chickens and turkeys were common to the barbecue pits of the South. Consequently, cities like Jackson, Memphis and Birmingham first developed pork barbeque traditions and rightfully, claim to compete for the title of “Best Pork Barbecue” even today. After the depression and World War II, when our national distribution and transportation systems widened and national economy greatly improved, beef became more common in everyday diets of the south and nationwide. Beef barbecue followed.