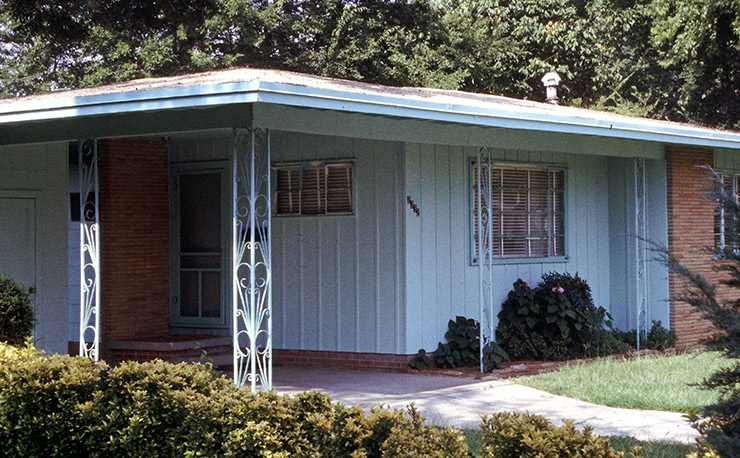 Medgar Evers House & Museum
DESCRIPTION: From a Civil Rights Movement perspective, this is Holy Ground. The small house where Medgar and Myrlie lived and site of Medgar’s assassination, and similar neighboring houses echo a strong, but simple call for freedom and opportunity that drove the Civil Rights Movement. Medgar Evers was shot in front of his home on 12 June 1963 because he inspired African-Americans to break the bonds of Jim Crow and hold power over their own lives. Since this landmark hosts the relics of a significant civil rights leader’s life and assassination site, it provides a concrete experience that may bridge the gap between reading about history and understanding it. As a museum, it informs those who visit of the many sacrifices that took place in Jackson and Mississippi. Tour are by appointment. The building is in a residential neighborhood, so large group parking is limited and visits should consider their noise level.
ADDRESS: 2332 Margaret Walker Alexander Drive, Jackson, MS MAP
PHONE: 601-981-2965
WEBSITE: https://civilrightstrail.com/attraction/medgar-evers-home/

Ayer Hall
DESCRIPTION: Honors Dr. Charles Ayer, first President of what is now Jackson State University. Ayer Hall was begun in 1903 immediately upon relocation of the college to its present site. It sits on the west side of campus and opened for male student occupancy in 1904. It contained forty-four sleeping rooms and several reading rooms on the second and third floors. The main floor housed the President’s office, a chapel, the library and recitation rooms. This historic building is a cornerstone of early 20th Century renaissance of Jackson College. It was placed on the National Register of Historic Places in 1977 and houses the Margaret Walker Alexander National Research Center.
ADDRESS: 1700 John R. Lynch Street, Jackson, MS MAP
PHONE: 601-968-2272
WEBSITE: http://www.jsums.edu

Alamo Theater
DESCRIPTION: In the historic Farish Street District, home of the Black business community before desegregation, was one of the last dual-purpose theaters in America. Built in the early 1940s this 524-seat theater functioned as a cinema featuring African American and western films. It also served as a performing arts theater featuring Black Vaudeville acts, stage bands and Black performing artists. The first structure was located on Farish Street in the 100 block across from where McCoy Federal Building now stands, the second was on West Amite Street at Roach Street. The third and present structure, recently renovated and designated a National Historic Register Landmark, is a focal point for the revitalization of the historic neighborhood.
ADDRESS: 333 North Farish Street, Jackson, MS MAP
PHONE: 601-352-3365
WEBSITE: none

Old Mount Helm Baptist Church
DESCRIPTION: Founded in 1835 in the Farish Street Historical District, Mt. Helm is the oldest Black congregation in Jackson; used as classrooms for students while construction for Jackson State University was under way in 1883-1885. It is a State Historic Landmark because the Baptist State Convention, the Church of Christ Holiness (USA), and the Church of God in Christ can trace part of their denominational histories back to this church.
SUNDAY WORSHIP: 11a
ADDRESS: 300 North Church Street, Jackson, MS MAP
PHONE: 601-353-3981
WEBSITE: http://www.mthelm.org

Christ Temple Church of Christ Holiness
DESCRIPTION: Mother church for a denomination of over 160 member churches in the US was founded circa 1896 in Jackson by the Rev Charles Price Jones. He was also an evangelist and prolific writer of religious songs. It is a State Historic Landmark.
SUNDAY WORSHIP: 11a
ADDRESS: 845 North Lamar Street, Jackson, MS MAP
PHONE: 601-352-5978
WEBSITE: none

Woodworth Chapel
DESCRIPTION: Erected in 1901, the chapel is the center of the religious life for Tougaloo College and the community; named in honor of Dr Frank G. Woodworth who served as Tougaloo College president from 1887 to 1912. While president, he also served as minister of the college church. Much of the prosperity and character of the college is traceable to his guidance and influence. To his thinking, religion stood at the center of all true education.
ADDRESS: Tougaloo College, 500 West County Line Road, Jackson, MS MAP
PHONE: 601-977-7842
WEBSITE: http://www.tougaloo.edu

Boddie Mansion
DESCRIPTION: Constructed in 1848 on the Boddie Plantation of 2,000 acres; John Boddie’s fiancée demanded she have the fairest house in Madison County with a cupola from which she could view the city of Jackson; before the Mansion was complete, she married another gentleman; some said she was fickle; others said she was repulsed by the harsh way Boddie used his slave laborers; disappointed in love, Boddie used the mansion to store his cotton crop and the cupola to observe the progress of his field hands; one of the few houses in Jackson that withstood the Civil War; now houses administrative offices for Tougaloo College
ADDRESS: 500 West County Line Road, Jackson, MS MAP
PHONE: 601-977-7842
WEBSITE: https://www.tougaloo.edu/mansion-gets-makeover

Dr. A. H. McCoy Federal Building
DESCRIPTION: On a portion of the former site where Dr McCoy conducted business for 40 years is one of the few federal buildings to bear the name of an African American. Dr McCoy held widespread real estate, mineral rights, oil leases, cattle farming and developed much of the land in the historic Farish Street section. He is also noted for co-founding Security Life Insurance Company in 1938 and building two movie theaters, at time when few in the nation were owned by Blacks after World War II.
ADDRESS: 100 West Capitol Street, Jackson, MS MAP

Farish Street Historical District
DESCRIPTION: Placed in the National Register of Historic Places in 1980, a grid patterned 125-acre area in the center of the city, is the largest residential and small business district in Jackson and spanning more than 100 years of development. The district includes over 690 listings in the National Register of Historic Places and is a compendium of architectural examples representing the craftsmanship of African-American building contractors. Walking tours reveal antebellum, Creole, Queen Anne, shotgun and bungalow cottage styles, as well as business structures from the early 20th century. Among the redevelopment are a hotel, train and bus terminal, restaurants, jazz clubs and historic shotgun homes.
ADDRESS: Amite Street, Fortification Street, Mill Street and Lamar Street, Jackson, MS MAP
PHONE: 610-949-4000
WEBSITE: http://www.farishstreet.com

Fannie Lou Hamer Memorial Statue
DESCRIPTION: Te only mortal and statue to one of the greatest Civil Rights and Women’s Rights activists — Fannie Lou Hamer (1917-1977). She was also a community organizer. Co-founder of the Freedom Democratic Party, which she represented at the 1964 Democratic National Convention, Hamer also organized Mississippi’s Freedom Summer along with the Student Nonviolent Coordinating Committee (SNCC). She was co-founder of the National Women’s Political Caucus, an organization created to recruit, train, and support women of all races who wish to seek election to government office.
ADDRESS: 929 Byron Street, Ruleville, MS MAP
WEBSITE: http://www.fannielouhamer.info