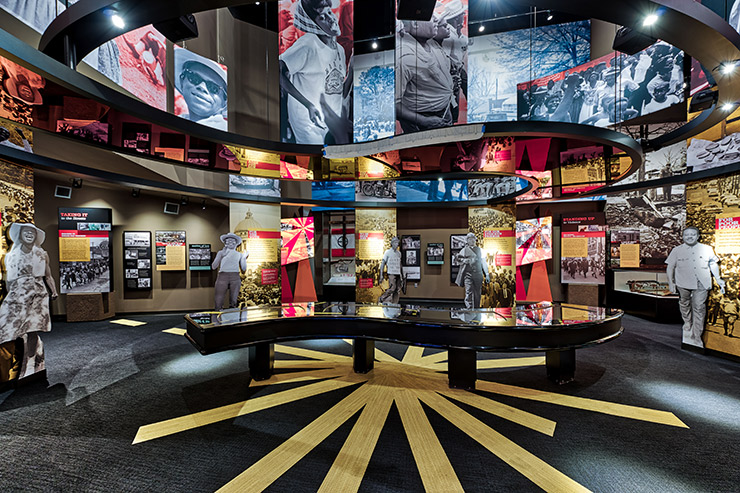 Margaret Walker Alexander Center for The Study of The African-American Experience
DESCRIPTION: Based on her 50-year career as a published writer, Dr. Alexander received the National Education Association Senior Fellowship Award for Lifetime Achievement and Contributions to American Literature in 1991. Two of her books Jubilee and My People received national acclaim. The city renamed the street of her residence in her honor and a public library. In 30 years at Jackson State, she served as director of the Institute for the Study of History, Life and Culture of Black People (renamed Margaret Walker Center). The center addresses life in the Civil Rights Movement, African American migration, Head Start Programs, health care, business, rural life, home ownership, churches, night life, the legal profession, military life, and music, whether it be Blues, Jazz, Gospel and Classics. The Center houses records like the papers of the late Margaret Walker Alexander, former U.S. Secretary of Education, Roderick Paige and a large oral history department that includes nearly 2000 interviews of local citizens.
ADMISSION: Free
DAYS & HOURS: Mon-Fri 8a-5p
ADDRESS: Jackson State University, Jackson, MS MAP
PHONE: 601-979-3935
WEBSITE: http://www.jsums.edu/margaretwalkercenter/

COFO Civil Rights Education Center
DESCRIPTION: Council of Federated Organizations (COFO) was founded in 1961. Created as an umbrella organization for all civil right groups functioning in the state of Mississippi during the freedom struggle. Voter registration and education were their top priorities. COFO organized the voter registration project during Freedom Summer in 1964. Learn about all of the student freedom action groups at this center.
DAYS & HOURS: Tours by appointment for groups
ADDRESS: 1017 John R Lynch Street, Jackson, MS MAP
PHONE: 601-979-4348
WEBSITE: http://www.jsums.edu/cofo.center

Medgar Evers Statue at Medgar Evers Library
DESCRIPTION: A life-sized bronze statue of Evers was erected in the front of this city library in Evers former neighborhood by local citizens. On the front line of the civil rights movement, in 1954 Evers was the first Field Secretary for the NAACP in Jackson and the first paid NAACP staff in the state. Evers and state NAACP president, Aaron Henry, built the Civil Rights Movement from the ground up in Mississippi. Today, Medgar Evers is remembered as an important symbol for all freedom-loving people around the world.
ADDRESS: 4215 Medgar Evers Blvd, Jackson, MS MAP
PHONE: 601-982-2867
WEBSITE: http://www.jhlibrary.com