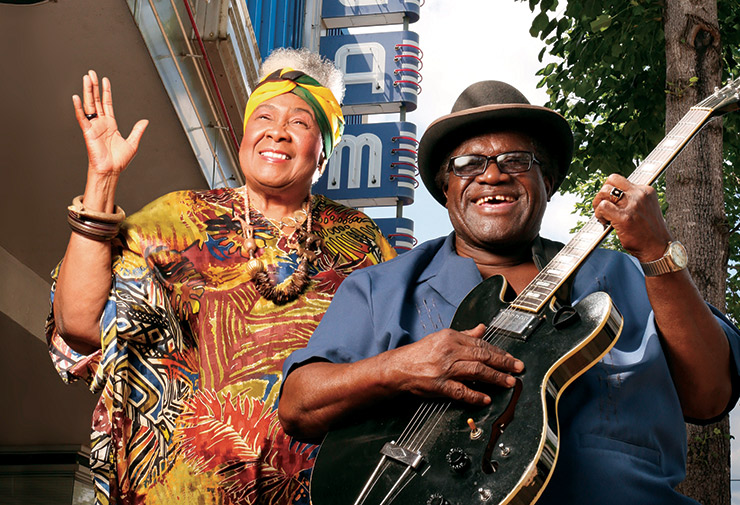 Music historians call the somewhat amorphous Mississippi Delta area, the birthplace of the Blues. Excluding Blues historians and enthusiasts, few people think of Jackson, Mississippi as a major music center even though it is the capitol of a state that has been one of, if not the greatest, producer of Blues, Gospel and Soul talent. Folk in these parts appreciate the Black music traditions of Jackson reflected in the local Blues and Soul Music clubs, at Farish Street Festival and among the great Gospel choirs in nearby churches.

In 1967, Malaco Records opened a recording studio in a building that remains its home today. In order to survive, Malaco needed to license their early recordings with established record labels for national distribution. Between 1968 and 1970, Capitol Records released six singles and a Grammy-nominated album by legendary bluesman Fred McDowell. Multi-year distribution deals for other artists were signed with ABC Records and Mercury Records.

In 1970, Wardell Quezergue (an African American) upgraded the company’s fortunes by supplying Malaco with New Orleans artists such as Fats Domino, Professor Longhair in return for studio time and session musicians. The story goes that Wardell brought 5 artists to Jackson in a borrowed school bus for sessions that yielded King Floyd’s Groove Me and Jean Knight’s Mr. Big Stuff. Earlier, STAX Records and Atlantic Records rejected both songs for distribution. Undaunted, Malaco released both King Floyd and Jean Knight tracks on its own label and distribution. Groove Me and Mr. Big Stuff became huge R&B and Pop hits, thereby opening national distribution deals with STAX and Atlantic. Then Denise LaSalle recorded a string of hit records for Malaco. With a several hits under its belt, Malaco’s studio and session musicians were now in demand.

Atlantic sent the Pointer Sisters among others for the Malaco touch. STAX sent Rufus Thomas. In 1973, King Floyd’s Woman Don’t Go Astray made #5 on the R&B charts. In the same year Malaco released its first gospel record, Gospel Train by the Golden Nuggets.

By 1974, the Disco craze exacted a heavy toll on all other genres in the music industry. Blues and Soul record labels shuttered. At Malaco, studio bookings dwindled, Atlantic dropped their Malaco distribution option, and many artists questioned Malaco management for their sales troubles or changes to creative direction. As cash declined, a disenchanted Mitchell Malouf left Malaco.

But unlike most other Blues and Soul labels, Malaco had not lost the touch. By luck, business savvy or both, they constructed a more diverse product line while enjoying the lower fixed costs of Jackson to weather the Disco storm. Though first recorded in 1973, Malaco released Misty Blue by Dorothy Moore just before Thanksgiving 1975 and it became an instant R&B hit. Malaco’s gamble entering the Gospel market also paid off in 1975 with the Jackson Southernaires, followed by the Soul Stirrers, The Sensational Nightingales, The Williams Brothers, The Truthettes, and The Angelic Gospel Singers and many more. The Jackson Southernaires’ Frank Williams became Malaco’s Director of Gospel Operations.

By 1977, artists Eddie Floyd, Frederick Knight, The Fiestas, David Porter and songwriters from now defunct STAX Records were knocking on Malaco’s doors. Like practically every other record label made Malaco several attempts at the Disco market and collected one big Disco hit. Nevertheless, it was clearly a Blues, Soul, and Gospel label.

Playing to its core competence, Malaco hired Dave Clark from the now-defunct T.K. Records to handle promotion and it stopped competing with mainstream labels. It refocused on traditional Black music that larger labels dismissed as unprofitable since they sold less than 100,000 records. Malaco executives knew they could make a profit selling as little 25,000-50,000 units since they didn’t have to pay for expensive offices and huge salaries like the huge LA and NYC record companies.

Dave Clark resurrected many more careers and the label developed an identifiable sound via a core group of session musicians and songwriters and brought Blues legend ZZ Hill to the label. The house band was anchored by Carson Whitsett on keyboards, Larry Addison on second keyboard, James Robertson on drums, Ray Griffin on bass, and Dino Zimmerman on guitar. A steady stream of strong material flowed from songwriters George Jackson, Larry Addison, Rich Cason and Jimmy Lewis. Thus, having a low-cost structure enabled it to become the caretaker old school Blues, Soul and Gospel music.

Word like that gets around. Blues guitarist Little Milton Campbell signed with Malaco in 1984. Johnnie Taylor had been a solid hit-maker since 1968, but the major labels considered him a has-been. Then Z.Z. Hill, who had also been a solid hit-maker at Malaco, passed away in 1984. Hearing Johnnie Taylor sing at the funeral, Tommy Couch invited Taylor to become the lead Soul artists on the label. Bobby Blue Bland, who had 62 Billboard Blues chart records to his credit, also signed with Malaco as its lead Blues artist. Perhaps its most savvy moves were yet to come.