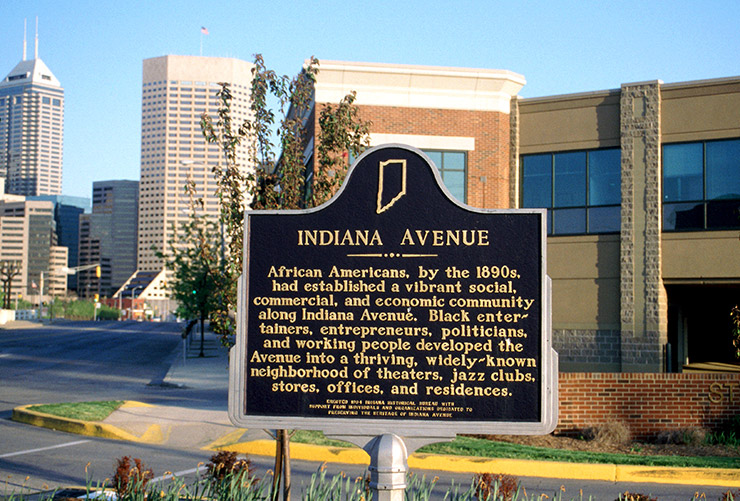 In 1836, Bethel AME Church formed the anchor of the Northwest community adjacent to Downtown along Indiana Avenue and West Street (renamed Martin Luther King Street). Black professional services, an insurance company, hotels, shops, nightclubs, and restaurants sprang up around the church. George P. Stewart and Will Porter founded the Indianapolis Recorder newspaper in 1895.

Impressed by the Black business acumen here, Booker T. Washington founded the Negro Business League here and held its annual conferences in Indianapolis for many years.

This area was also headquarters for Madame C.J. Walker, the nation’s first black millionaire. Walker owned the Walker College of Hair Culture and the Walker Manufacturing Company, which she founded in 1910. The Walker Building began construction prior to the death of Madame Walker in 1919 and was completed by her daughter A’Lelia Walker in 1927. An African motif theatre, ballroom and casino were constructed in the building. The building was the entertainment pinnacle of Indiana Avenue from the late 1920s to the 1950s.

A lively Jazz and Blues scene sprang up one block south in the 500 block of Indiana Avenue. It became a frequent stop on the Chitlin’ Circuit, attracting the likes of Ella Fitzgerald, Dinah Washington, Duke Ellington, Count Basie and Lionel Hampton. The area also produced fertile musical ground for Wes Montgomery, Noble Sissle and Freddie Hubbard. After an Indianapolis ABC baseball game, you could bet that Indiana Avenue was jumping. The money. Liquor and partying flowed.

Unlike many historically black districts nationwide, the area was not destroyed by the 1968 riots, freeway construction or misguided redevelopment. Instead, the area suffered gradual abandonment by the black middleclass. New migrants settled in the area. By the early 1970s, Indiana Avenue was a basket case.

Fortunately, a non-profit organization came to the rescue in 1979. They convinced public and private interests in the city and state to raise money that would renovate the ballroom, theatre, shops and offices. The project was completed by 1996, but spin-off effects are taking root around Walker Building. The neighborhood revitalization continues at the nearby Ransom Place Museum, Freetown Village and Crispus Attucks High School and a popular restaurant.