Car Rentals: Take the Rental Car Shuttle for Avis, Hertz, National and Thrifty car renters who are on or near both airports. JFK Blvd leads you to Airport Tollway for the quickest route to Downtown. Otherwise, take Route 59 to Beltway 8, then change to I-45 Freeway to downtown Houston. Super Shuttles: (800-258-3826) has a large presence at IAH. Courtesy vans for nearby hotels also frequent the airport. Taxis: Houston has the third-largest taxi fleet in the country and four patrons can ride for the price of one. IAH Airport is 20 miles to Downtown, so expect to pay $50 or more for that route. Service is provided by Fiesta Cab (713-236-9400), Liberty Cab (713-695-6700), United Cab (713-699-0000) and Yellow Cab (713-236-1111). On return, catch a taxi at Downtown, Galleria/Post Oak, Texas Medical Center and Greenway Plaza hotels.

William Hobby Airport (HOU) was Houston’s first airport, but now the region’s secondary airport. It has been modernized and receives many regional and national flights. HOU Airport is a better option for points southeast of Downtown, such as NASA Space Center, Clear Lake and Galveston. Car Rental service is provided by Avis, Hertz, National and Thrifty car renters who are on or near both airports. If you don’t know local streets well, strictly follow signage to I-45 Freeway when leaving HOU Airport. Shuttle service is provided by Super Shuttle (800-258-3826) and there are a large number of Taxi/Uber/Lyft rides available as well.

Amtrak station is located at 902 Washington Avenue in downtown Houston. Unfortunately, there is no Houston-Dallas train service and this small utilitarian station serves only one Amtrak route 3 times per week:

By 2026, Texas Central Railway will provide a better way to travel the Lone Star State by removing the many pain points of driving and flying. From flexible booking options and seamless interchanges to frictionless security, wide aisles, comfortable seating, fast WIFI and food and beverage service, high-speed trains will provide an anxiety-free travel experience for families, business travelers, students, tourists and anyone else traveling between downtown Dallas, Brazos Valley and north Houston. Texas Central Railway is a private entity building this route.

Houston-Dallas-Oklahoma City is listed as a route for future High Speed Rail service by the U.S. Department of Transportation. See this important article about Interstate High Speed Rail. 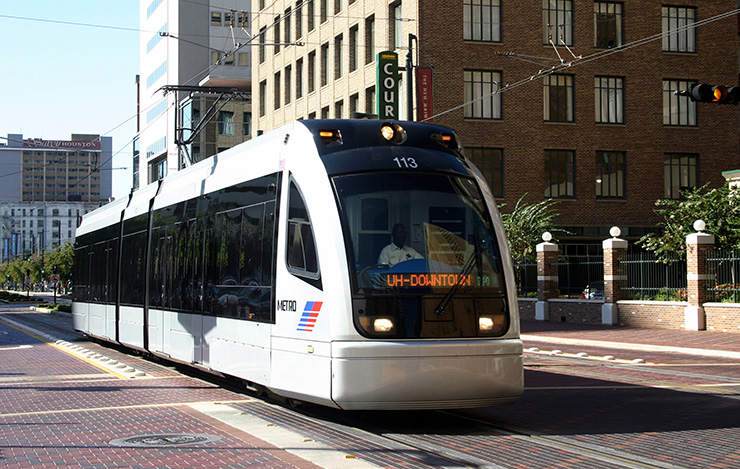 Tickets can be purchased via your smartphone or at a station ticket dispenser. Single Fare is $1.25 and Day Pass for all METRORail and METRO buses is $3. Single Fare also provides free transfers between all light rail lines and buses for up to three hours. METRO police perform random fare inspections aboard trains to verify that passengers have paid the proper fare. If unable to show proof of purchase, passengers can be fined up to $500.

Due to funding shortfall, the 10-mile Blue Line is deferred and Gold Line will be built as a 4-mile Bus Rapid Transit route to open in 2018-19. Initially, Gold Line with not connect to METRORail, but its dedicated lanes will be relatively easy to convert to light rail in the future. When Blue Line is eventually built, it will have transfers to Red Line at Wheeler Transit Center and Purple Line at Robertson Stadium/U. of Houston Station and Gold Line at Bellaire Station.

Galveston has a small, but important cruiseport in America. You can take 4, 5 and 7-day cruises through the Gulf of Mexico to Caribbean ports in Jamaica, Grand Cayman, Honduras, Costa Maya and Cozumel. Cruises depart and return in the mornings. For safety and passenger convenience, proceed directly to The Texas Cruise Ship Terminals 1 and Terminal 2 to drop off passengers and baggage. See Terminal 1 and Terminal 2 at 2502 Harborside Drive on this CRUISEPORT MAP

There is peak demand for Taxis/Uber during debarkation hours. Due to peak demand, you should try to debark from the cruise ship early or prepare to wait as other taxis/Ubers return to the Cruise Terminals throughout the debarkation morning rush. There is also a convenient car rental state by Hertz. 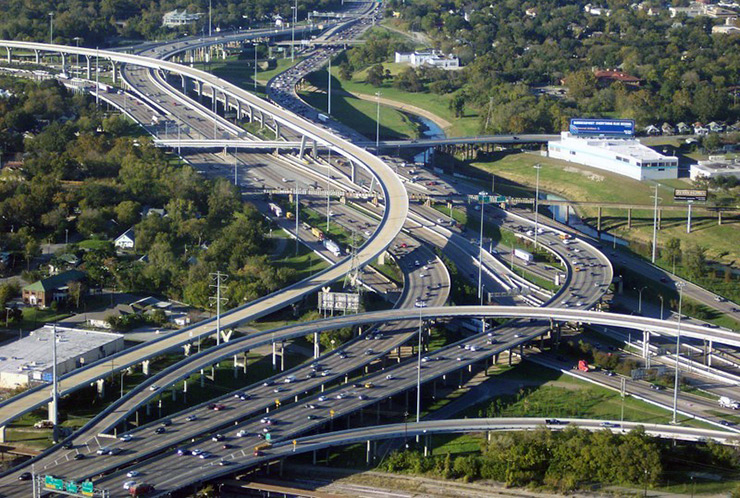 Houston Freeway & Tollway Network is one of America’s largest in terms of mileage and lanes per mile. Like Los Angeles, it has large complex freeway interchanges, carpool lanes, sound walls, metered entrances and freeway status signs that enable it to carry more autos per hour. I-10 Freeway has an incredible 23 lanes, the most for any freeway in the world. Nevertheless, Houston freeways are congested 4-5 hours each weekday morning and another 4-5 hours each weekday evening. Residents usually refer to the freeways and tollways by number.