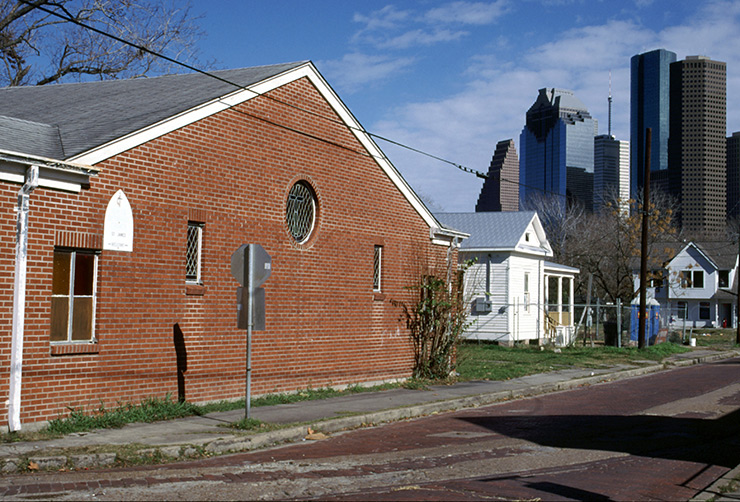 Freedmenstown
DESCRIPTION: Founded just after 1865 and is the oldest African American district in the city; lots of wooden shotgun houses still serve as dwellings. The skyline of downtown Houston grew up as a backdrop on its east side. Rutherford B. Yates, son of Jack Yates and the 1st African American printer in Houston lived here. Founder’s Memorial Park sits of the northern edge of the district. Today, gentrification is gobbling up the edges of this historic district, which are close to downtown.
ADDRESS: bounded by I-45 Freeway, Kirby, Montrose and Gray, Houston, TX MAP
PHONE: tour info 713-739-9414

Jack Yates House
DESCRIPTION: In 1870 former enslaved person, Rev John Henry “Jack” Yates (1828-1897) used his carpentry and leadership skills to build this home, which was formerly located in the Fourth Ward. Yates was widely respected for his ability to motivate former slaves to get an education, buy land, build homes and vote. Rev. Yates helped establish the first Baptist College in the state which opened in Marshall, Texas in 1881. A few years later, 1885, he helped open the Houston Baptist Academy to prepare students for business, industrial trades, and the ministry; call the Heritage Society for tour times.
ADDRESS: 1100 Bagby in Sam Houston Park, Houston, TX MAP
PHONE: 713-655-1912

2209 Dowling Street
DESCRIPTION: The building was Houston’s unofficial headquarters for the Civil Rights Movement under the leadership of attorney Eldrewey Stearns. His office was here. Much of the planning for the first lunch counter sit-in in Downtown Houston was executed here in February 1960.
ADDRESS: 2209 Dowling Street, Houston, TX MAP

Phyllis Wheatley High School
DESCRIPTION: Most older cities with large African American populations have historic schools which showcased the best and brightest; in Houston this Fifth Ward school was among the best. It includes Barbara Jordan and Mickey Leland as alumni since they were Fifth Ward residents.
ADDRESS: 4801 Providence Street, Houston, TX MAP
PHONE: 713-671-3900

Houston Negro Hospital
DESCRIPTION: Now called “Riverside General Hospital”, the Houston Negro Hospital completed in 1926, is a three-story building in Spanish Colonial Revival style located in the city’s Third Ward. It was the first non-profit hospital for Black patients in Houston, and it provided a place of work for Black physicians. The hospital campus is still in use for medical purposes; listed on the National Register of Historic Places.
ADDRESS: 3204 Ennis Street, Houston, TX MAP

Independence Heights
DESCRIPTION: The first black community in Texas was established around 1908, as middle-class African American families began moving into north Houston. Independence Heights operated as a city until its 1915 annexation by the City of Houston. It has a Texas Historical Marker and is listed on the National Register of Historic Places.
ADDRESS: 7818 North Main Street, Houston, TX MAP