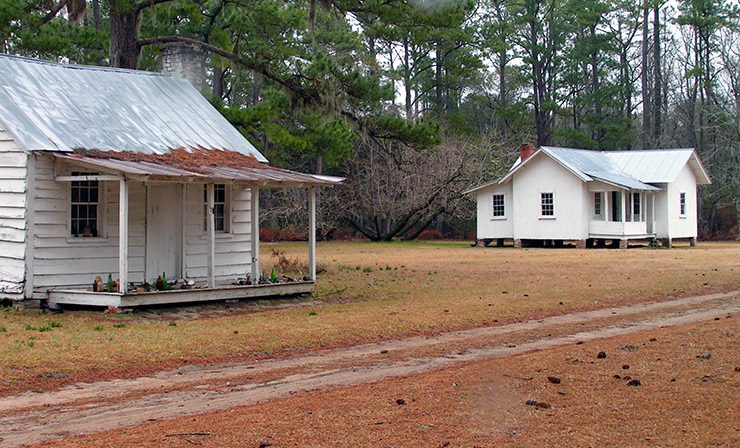 Hobcaw Barony
A 17,500 acre research reserve, Hobcaw Barony is one of the few undeveloped tracts on the Waccamaw Neck. Native Americans called it “hobcaw”, meaning “between the waters”; in 1718, the land became a colonial grant, called a barony. Subdivided into plantations extending from the river to the sea, it was part of the great rice empire until the turn of the 20th century. Historic sites include “Friendfield,” a 19th century slave village where enslaved people and freedmen lived until 1952. The property includes slave cabins, a church and artifacts excavated from the site. The Director of Interpretation and has a wealth of knowledge about historic black life on the property.
ADDRESS: 22 Hobcaw Road
PHONE: 843-546-4623
WEBSITE: http://www.hobcawbarony.org

Joseph Hayne Rainey House
Built in circa 1760. Rainey held many important political positions. His main fame was as the First African American ever elected to the United States House of Representatives.
ADDRESS: 909 Prince Street

Mansfield Plantation
Only recently opened to the public, this antebellum plantation of the old South was once home to about 100 enslaved people; adapting African culture to survive, they worked the old rice fields and winnowing building (the place where rice chaff was separated from rice kernels) that still stands. The first tour lasts about an hour and wanders through the slave village and plantation landscape. If you opt for the second tour, you’ll also get tea and sweets in the dining room of Big House. The sweets are based on homemade 19th century recipes. Tours are by appt only.
ADDRESS: S.C. Highway 701 North

Bethel A.M.E. Church
Founded circa 1882, this church has been the center of African American achievements within the Georgetown community.
ADDRESS: 417 Broad Street
PHONE: 843-546-4898

Brookgreen Gardens
Along with a sculpture garden, wildlife preserve is the new Lowcountry Center that depicts the history of the Lowcountry from its Native American beginnings to its slave era and beyond. Gullah native and historian Ron Daise, who produced and starred in the Nickelodeon program “Gullah Gullah Island” with his wife Natalie, is the VP for Creative Education at the center. Don’t miss his entertaining and informative one-man show tracing the history of the Gullah people from Africa to South Carolina’s Lowcountry.
DAYS & HOURS: daily 9:30a-5p, closed Mondays in December
ADDRESS: U.S. Highway 17
PHONE: 843-235-6000 and 800-849-1931
WEBSITE: http://www.brookgreen.org

The Rice Museum
The old clock tower is the landmark of downtown Georgetown. Tour the history of rice culture in Georgetown County, where the majority of rice was grown in South Carolina during the plantation era. Friendly tour guides take you through exhibits on the rice plantations and slave life, as well as original artifacts from rice cultivation. The venue includes historical exhibits of Joseph Hayne Rainey, the first African American elected to the U.S. House of Representatives, and African American art.
ADDRESS: 633 Front Street
PHONE: 843-546-7423
WEBSITE: http://www.ricemuseum.org