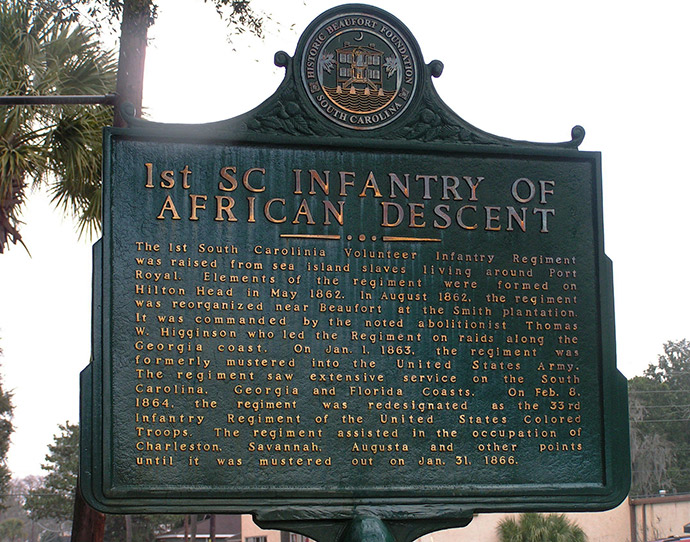 LyBensons Gallery & Studio
The gallery, owned by Rev. Kenneth Hodges of Tabernacle Baptist Church, has a wonderful wealth of African and African American art. The gallery includes a room dedicated to Robert Smalls where there is a replica of the former slave, Navy captain and U.S. Congressman.
DAAYS & HOURS: 10a–5:30p Mon–Sat
ADDRESS: 211 Charles Street
PHONE: 843-525-9006; http://www.lybensons.com

Beaufort National Cemetery
One of the first U.S. National Cemeteries designated by President Lincoln. It holds the remains of veterans from every conflict between the Civil War and the Persian Gulf War. It contains hundreds of graves of “Colored Troops” for both Union and Confederate armies from the Civil War. Graves of some of the all Black 54th Massachusetts Infantry can be found in section 16; in 1989, 19 Union soldiers of the all Black Massachusetts 55th Infantry were re-interred with full military honors. Their remains were found on Folly Island, S.C. in 1987. Their grave is marked with a bronze plaque near section 56.
ADDRESS: 1601 Boundary Street
PHONE: 843-524-3925

Grand Army Hall
The first Grand Army of the Republic (GAR) post had been organized in Decatur, Illinois in 1866. In 1892, African Americans of the Georgia and South Carolina GAR organized one of their own – David Hunter Post No. 9, and in 1896. It became the center of African American community activities, including the annual “Decoration Day” celebrated on May 30th.
ADDRESS: 706 New Castle Street

First African Baptist Church
Circa 1865 Parishioners include, Anita Prather, folklorist and storyteller through her “Aunt Pearlie Sue” character, which was made into a program for PBS. Church historian Darryl T. Murphy, is also the curator of the Penn School exhibit at Penn Center, and is working to preserve Negro Spirituals (Sea Island Spirituals). The church remains open and active, while under renovations. ADDRESS: 601 New Street
PHONE: 843-524-6886

Tabernacle Baptist Church
Built in circa 1811, it was originally built for white members of the Baptist Church of Beaufort, it was officially formed as an African American church during the Civil War in 1863. The oldest gravestones in the church yard are of the white slave owners. There are post-Civil War burial markers of black members as well as the Smalls Family, including Robert Smalls, Sarah Williams, Hannah Jones, and Annie Wigg.
SUNDAY WORSHIP: 11a
ADDRESS: 911 Craven Street
PHONE: 843-524-0376
WEBSITE: http://www.gullahfestival.com