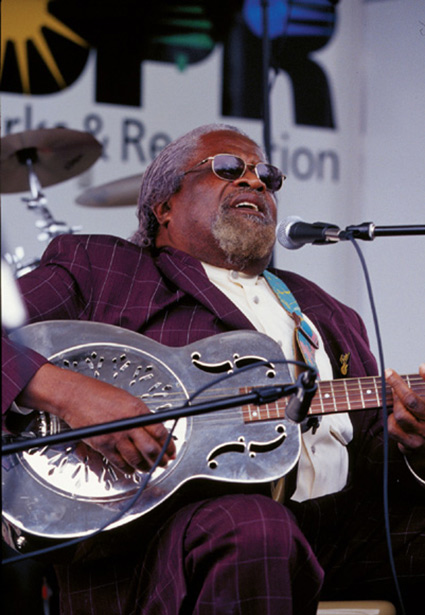 When most people think about the origins of the Blues, Memphis and the Mississippi Delta come to mind. But most people are surprised to learn about long and historic Durham Blues tradition. Durham’s Golden Age of Blues centered around East Coast Piedmont Blues. This style, originally thought to have been derived from African-American banjo picking, was principally found in the region between the Appalachian Mountains to the west and the coastal plain to the east, and stretching from Washington DC in the North to Atlanta in the South.

Why here? Following the American Civil War when Durham’s tobacco industry really began to thrive, the center of the tobacco trade took place in and near the downtown warehouses. Farmers came here in large numbers to conduct business with street vendors and for other business & legal services. Black musicians and others flocked here to capitalize on their abundance of cash flow.

So it was here that many of the black musicians like William Trice, John Henry Garner, Blind Gary Davis, Blind Boy Fuller, John Dee Holeman, Washboard Sam, Sonny Terry and many others came to perform Durham Blues. In addition to these now legendary musicians, everyday working-class African Americans were noted to have also been performers of the East Coast Piedmont Blues sound. Together these artisans helped broaden Durham Blues music from relatively localized popularity, to a preeminent acoustic Blues style that earned the city a nationwide reputation as a prime spot for the Blues.

Today, Durham boasts a historic marker designating the “Bull City Blues,” an art form that has been rejuvenated and widely recognized at a number of the city’s venues and annual events.

The Hayti Cultural Center, situated in what was once one of America’s most successful African American marketplaces and neighborhoods, is the primary sponsor of the annual Bull Durham Blues Festival. The festival celebrates Durham’s rich musical heritage as an important center of Carolina and Piedmont Blues through performances by national, regional and local Blues artists. It has become North Carolina’s largest celebration of the Blues art form, attracting fans from over 175 North Carolina cities, 25 states, and five countries.

National recognition of Durham Blues legacy is richly deserved and the city is enormously proud to be the caretakers charged with preserving, promoting and sharing a genre one of the world’s great musical traditions.