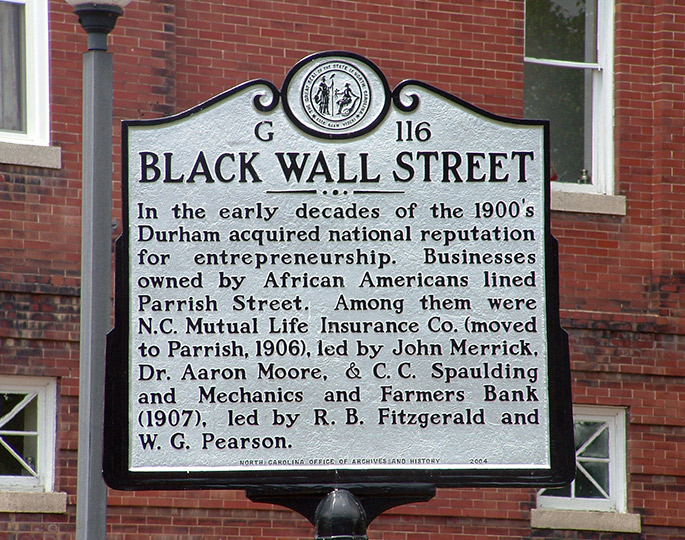 Situated in the center of Durham’s downtown district, are the remnants of what was once known around the nation as “Black Wall Street.” But these remnants are not your archetypal abandoned and dilapidated structures on the landscape. Instead, they they are reminders of a glorious past, vibrant present and promising future.

Following the American Civil War, Durham’s tobacco industry really began to thrive. This not only bought about a great deal of wealth for tobacco company owners and farmers, but also set off a surge in African American entrepreneurship. This resulted in the establishment of numerous black-owned businesses and an strong black middle class in the region and state.

The most notable of these enterprises was North Carolina Mutual Life Insurance Company founded in 1898, then became the oldest and largest African American financial institution in the country. Mechanics and Farmers opened for business in 1908 under the tutelage of nine prominent African-American businessmen. Still operating today, the bank holds the distinction of being the first lending institution in North Carolina to receive a Certificate of Authority from the Federal Housing Administration in 1935. Unfortunately, North Carolina Mutual Life Insurance Company fell into receivership under the state.

The majority of black-owned businesses were located on Parish Street, a four block long street that African Americans could proudly call their own. And in the process earned the area the nickname of “Black Wall Street,” and Durham “the “City of Negro enterprise,” as termed by Booker T. Washington.

Today, downtown Durham and Black Wall Street are still undergoing revitalization efforts to redevelop it as a National Heritage Area. As such, it is the heart of a re-invigorated central city which again showcases Parish Street as a thriving community with offices; clothing, home furnishing, food and other stores; restaurants; community services; residences; meeting places and shrines to its storied past. Included in the revitalization is a museum without walls, incorporating an eclectic amalgamation of storyboards, structures, bronze and stone markers, art and photographs that will describe Durham African-American history and heritage. To date, a state highway historical marker has already been placed on the corner of Mangum and Parrish Streets, just one of many steps to come in recognizing and embracing a new era on historic Parrish Street.

Listed on the National Register of Historic Places, the Old West Durham, stretching from Broad Street west to Hillandale Road and from Englewood Avenue south to the Durham Freeway, is one of the oldest neighborhoods in the Bull City. Previously known as the tiny settlement of Pin Hook, the area was a haven for travelers even before it was officially called Durham, to buy and sell tobacco products. Once the railroad increased its presence here, other industries started to take shape, namely the Erwin Cotton Mills that changed the settlement into sort of a mill village. Given the fact that the tobacco trade also contributed to an emerging black middle class in Durham, African Americans also settled in the areas adjacent to the Old West Durham neighborhood.

Brookstown was home to many of the town’s Black mill, brickyard and tobacco factory workers, as well as the site of numerous African American owned businesses and the like. In fact, the brickyard was eventually owned by an African American family and renamed the Fitzgerald Brickyard (located on the site where Duke’s Freeman Center for Jewish Life stands today). Hickstown, now called the Crest Street neighborhood, was another primarily African American neighborhood.

Today, Old West Durham, which includes Duke University West Campus, is one of city’s most popular places to dine and shop, with numerous boutique shops, retail stores, eclectic restaurants, office spaces and residences, for people of all walks of life.