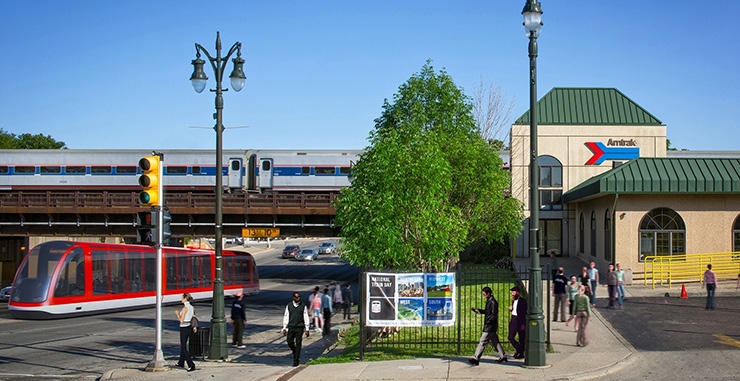 Detroit is attempting to do something that no large American city has ever done. Come back from the abyss. To the surprise of many, a couple of billionaires are joining government officials to bet big on Detroit after its 2013 Bankruptcy. Based on evidence to date, they are avoiding past mistakes that tanked the city.

Battered from bankruptcy, Detroit is often viewed as a challenging place to visit. Before we get to the good news, its important to understand how it got so bad. Most American cities suffer bad fiscal management at some point in their history. Detroit compounded those mistakes with two strategic errors that are lessons for mayors of other large American cities.

The first lesson began after World War II, when Detroit had one of the nation’s largest streetcar systems. Post-war America instantly fell in love with cars and highways. By 1950, Detroit had the largest percentage of manufacturing workers concentrated in one industry flush with money. Seeing automotive and banking executives build mansions in wealthy suburbs like Gross Pointe and St. Claire Shores, enlarged blue-collar dreams for nice homes with large yards in the suburbs too. Detroit and adjacent Dearborn over-catered to the automotive industry by building the highest percentage of freeways per square mile than any other metro area in America. Instead of picking four streetcar corridors, radiating from Downtown, for conversion to rapid transit, the city shutdown streetcar service by 1956. By defaulting to freeway-only plan, Detroit encouraged white middleclass flight to the suburbs.

The second lesson is Detroit had no commitment to “successful urban redevelopment.” One component of successful urban redevelopment is to build rapid transit in at least three corridors radiating from Downtown. In Detroit’s case, the first rapid transit line should have gone under its main drag, Woodward Avenue. In 1964, the federal government asked major cities to submit applications for heavy rail rapid transit projects. Instead, the city’s application for federal transportation funds only emphasized more freeways, particularly for Chrysler Freeway, which cut off most of Downtown from the waterfront.

Another component of successful urban redevelopment is to use $1 of federal and state grants to lever abut $3 of private investment for modest-scaled office, hotel, residential and retail development spread to strengthen those two or three rapid transit corridors in Downtown. When well-planned, that initial public-private investment sparks more private investment for infill office, hotel, residential and retail development later. Instead of following the successful templates of Chicago and Philadelphia for that strategy, Detroit’s government and business leadership concentrated federal and state redevelopment grants on Renaissance Center waterfront, Hart Plaza at the waterfront and a Downtown People Mover.

Opened in 1977, Renaissance Center has been successful on its own. But viewed as a tax-supported project to spark near-term redevelopment, it was a failure. Its fortress-like design only encouraged office and hotel patrons to shop and dine inside. It dissuaded Renaissance Center workers and hotel visitors from exploring the waterfront and Hart Plaza. Chrysler Freeway also dissuaded people from walking to cafes and shops to nearby. Though the 1980 aerial Detroit People Mover, opened 10 years later with a stop at Renaissance Center, intended to circulate people around downtown, its impact has been minimal on retail. Light rail stations encourage far retail activity around stations. For that reason, the Detroit People Mover funds should have been invested in a Woodward Avenue Metro subway line.

Aside from those strategic blunders, in the 1980s, Detroit automakers led America at outsourcing manufacturing jobs to increase corporate profits. Ongoing freeway expansion without a at least three rapid transit lines next encouraged black middle class flight to the suburbs. By 2000, suburban flight hollowed out much of Detroit proper. By 2008, GM and Chrysler, after failing to adapt to changing consumer preferences, needed a federal bail-out. As a result of those and other factors, Detroit became a “Reverse Donut City” and even its Downtown was sketchy.

Contrast Detroit with a peer city of roughly the same size in 1950. Decades earlier than 1950, Philadelphia invested in Metro heavy rail, streetcars and commuter rail. After the Interstate Highway Plan passed in 1955, Philadelphia slowly expanded its freeway system. It levered $1 of federal & state grants for about $3 of private investment in office, residential, hotel, retail and art institution development in Center City (Downtown). New sports palaces were built at a Metro subway station within the city, making it easy for Center City workers to attend games, then ride transit home. Those public and private investments kept Center City attractive to Fortune 1000 companies and residents. Though Philly suffered its share of service jobs fleeing to the suburbs enabled by freeways and urban blight traced to loss of manufacturing jobs, population stabilized by 1990.

The tale of two cities impact of policy differences is revealed in the numbers:

In desperation to save its tax base and slow its population freefall, Detroit added three major casinos, a new Detroit Lions football stadium and a new Detroit Tigers baseball park to Downtown. It helped restore a few Downtown and Midtown theaters. Detroit’s trajectory finally made an upswing in 2014, when philanthropy and big private investors took a more active role in the smarter redevelopment of Downtown, Midtown and New Center. They made Campus Martius in Downtown, the heart of Detroit redevelopment.

There’s more good news in 2017. The Streetcar having light rail characteristics opens on Woodward Avenue. Combined with Detroit People Mover, commuters will easily transfer between many Downtown, Midtown and New Center attractions. More apartments, shops, cafes, brewpubs and coffeehouses are sprouting like weeds around Campus Martius and Grand Circus Park. Little Caesars Arena along Woodward Avenue in Midtown will open as home of the Detroit Red Wings hockey team. Detroit Pistons basketball team is in negotiations to move from Auburn Hills to Little Caesars Arena as well. Wayne State University continues its expansion and redevelopment in Midtown and developers are flocking around Woodward Avenue & Grand Blvd area of New Center. Most of the 304-mile Amtrak route between Chicago and Detroit will reach 110 mph. More daily trains are enhancing developer interest where Detroit Amtrak Station meets Woodward Avenue Streetcar Station in New Center. All those activities are attracting more in-fill development of Downtown, Midtown and New Center like pieces filling up a checkerboard.

Perhaps the best news is Detroit population is trending towards stabilization by 2018. That’s a great development every visitor and meeting planner can celebrate.