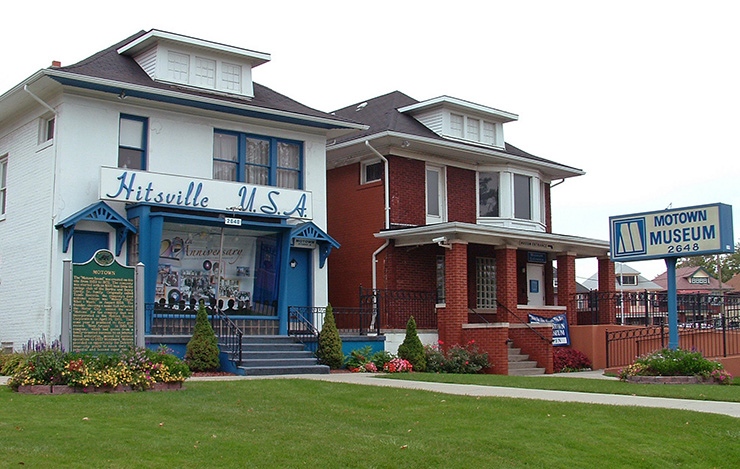 Gateway to Freedom International Memorial to the Underground Railroad
DESCRIPTION: Dedicated in October 2001 at Hart Plaza along the Riverwalk, is one of the finest memorials to the Underground Railroad in terms of historic meaning and artistry. Detroit was one of the largest terminals of the Underground Railroad with a network of abolitionists aiding people seeking freedom — just across the river. Detroit’s closest Underground Railroad Station, Second Baptist Church, is only 8 blocks from the river and Detroit has one of the narrowest river distances between America and Canada. Since Detroit looks southeast at Windsor, Canada, the setting sun revealed more places along the Canadian waterfront for railroad conductors to signal last-minute secret crossings. Hence, this memorial faces its companion Freedom Tower Memorial in Windsor, Ontario at one of the Underground Railroad’s most used paths to freedom. Renowned sculptor Ed Dwight, captures the challenge of the journey, sense of place and dream of freedom in the expression of each figure. Granite slabs on the memorial are inscribed with information about the Underground Railroad and the sculptor. Anyone with an appreciation for American and Canadian history will find a visit to both memorials deeply moving. As you can imagine, this memorial is often the highlight of celebrations during Juneteenth and the annual Africa World Festival held in Hart Plaza.
DAYS & HOURS: daily
ADDRESS: Hart Plaza, Detroit, MI MAP

Joe Louis Monument
DESCRIPTION: From his defeat of German champion Max Schmeling during World War II, to his unmatched 13-year reign as Heavyweight Boxing Champion, Joe Louis ranks among the most influential sports figures of the 20th century. Based on the number of successful title defenses and caliber of competition, Joe Louis may have been the greatest heavyweight pugilist ever. The city pays homage to its native son with three monuments in the downtown area. The 12-foot bronze sculpture by Ed Hamilton captures Joe in his prime boxing form.
ADDRESS: Joe Louis Arena, Detroit, MI MAP

National Museum of the Tuskegee Airmen
DESCRIPTION: In 1941 the Army Air Corps created the now famous segregated pilot training program at Tuskegee Institute in Alabama. Among those graduates was the late Detroit Mayor, Coleman Young. This museum honors the 99th Fighter Squadron, 332nd Fighter Group, and the 477th Bombardment Group which became known as the Tuskegee Airmen; during the WWII air campaign over Europe. While suffering major casualties themselves, not a single American bomber escorted by the Tuskegee Airmen was lost. The Airmen’s heroism helped pave the way for mainstream America to accept the Civil Rights Movement of the 1950s and 1960s.
ADMISSION: donations appreciated
DAYS & HOURS: by appt
ADDRESS: 6325 West Jefferson Avenue, Detroit, MI MAP
PHONE: 313-843-8849
WEBSITE: http://www.tuskegeeairmennationalmuseum.org

Shrine of the Black Madonna Cultural Center & Bookstore
DESCRIPTION: Spend the afternoon traipsing among the artwork, refreshing the spirit and locating hard to find books concerning black heritage. Also housed in the Shrine of the Black Madonna Cultural Center and Bookstore is a Black Holocaust Museum, a memorial to more than 100 million Africans captured in slave trade for the Americas and Europe. It contains a collection of compelling documents, photographs, narratives and artifacts from the slave trade, a reproduction of a slave cabin and highly emotional portrayals of the African slave experience.
DAYS & HOURS: Tue-Thu 11a-6p, Fri-Sat 11a-7p
ADDRESS: 13535 Livernois Avenue, Detroit, MI MAP
PHONE: 313-491-0777
WEBSITE: http://www.shrinebookstore.com

Plowshares Theatre Company
DESCRIPTION: A cultural gem and Michigan’s only professional African-American theater company, Plowshares has presented numerous productions by contemporary and up-and-coming African-American playwrights to the community since 1990, earning it a reputation as one of the most dynamic drama companies in Michigan.
DAYS & HOURS: 10a-5p
ADDRESS: most shows at Wright Museum of African American History, 315 East Warren Avenue, Detroit, MI MAP
PHONE: 313-506-2858
WEBSITE: http://www.plowshares.org