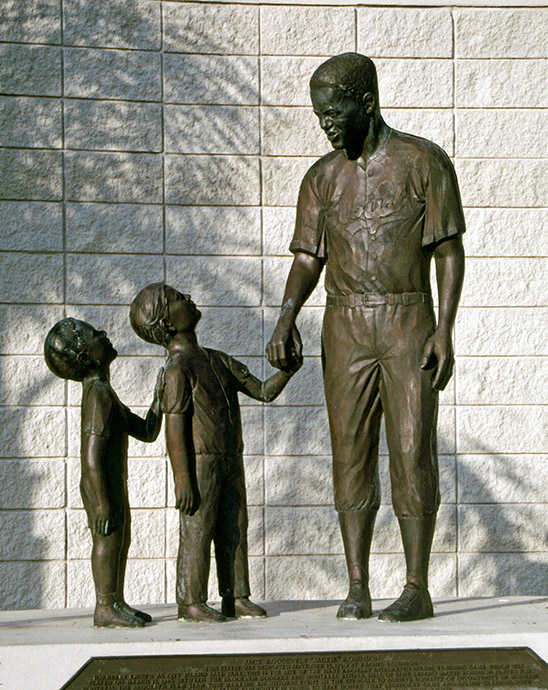 Daytona Beach is named after Mathias Day who purchased a 3,200-acre tract along the coast in 1870. His tract included an old sugar mill plantation with a huge appetite for cheap, hard-working labor. Most African Americans after slavery went North, others went to Florida and the islands. In Florida many worked in the agribusiness industries, such as the sugar mill plantation here. That hard work without unions enabled few alternatives to improve their quality of life.

Daytona Beach is the birthplace of famed theologian, Dr. Howard Thurman, who taught action-oriented nonviolence that was adopted by the Civil Rights Movement. He became a teacher and Dean of Chapel at Morehouse College in Atlanta, Georgia, where he mentored Dr. Martin Luther King, Jr. among others. Thurman was born in his family’s Daytona Beach home in 1900.

Daytona Beach showed its finest public moment with the assistance of Jackie Robinson and Branch Rickey in 1946. Jackie made history playing for the New York Yankees minor league team here before breaking the “Color Barrier” of Major League Baseball and by extension all professional team sports in 1947. If the baseball integration experiment by Yankee’s owner/executive Branch Rickey, had failed here, more years would pass before team sports and American society integrated.

Jackie’s talent was never in doubt, but the “other” challenges he faced are well publicized. Even today, many don’t fully appreciate the related challenges faced by Anglo-American, Branch Rickey. He was widely criticized by fans, sports writers civic leaders. He received taunts of “N__ lover” and death threats throughout the nation. Equally important, would fans show up at the games? Would they be unusually rowdy?

Fortunately, most sellout crowds in Daytona Beach were people of good will who permitted the games to be played, even as Jackie shined. Branch proved to other sports team owners that integration meant more exciting play. Negro Leagues Baseball teams and white Major League Teams had been playing unofficial exhibition games for years. Fans liked what they saw and increased game attendance/higher prices. This of course meant more profits for Major League Baseball team owners. The rest is American history.

Note: African Americans played professional baseball with European Americans in the late 1800s, before an unofficial ban was imposed at the conclusion of that century.