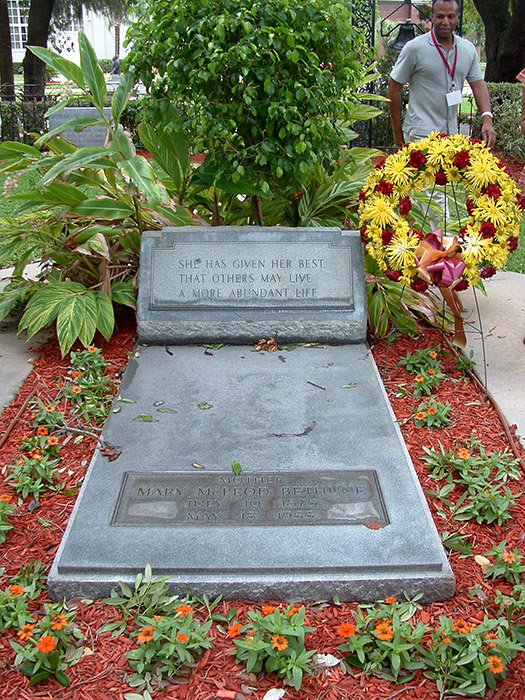 Mary McCloud Bethune House
DESCRIPTION: Constructed in 1914, her house is located in the center of Bethune-Cookman College campus; now a National Historic Landmark and a restored museum filled with Dr. Mary McCloud Bethune’s childhood bible, national and international awards, and writings. The original heater, household appliances and memorabilia are displayed as she lived in the house from 1923 onwards. Eleanor Roosevelt and many other hosted dignitaries spent the night during her barrier shattering lifetime the distinguished educator, advisor to several US Presidents, and founder of the National Council of Negro Women is interred next to the house. Considering her record of leadership in the Women’s Movement, Civil Rights Movement and her love of elephant figurines, the Deltas named her an honorary soror.
DAYS & HOURS: Mon-Fri 10a-5p
ADDRESS: Mary McCloud Bethune Blvd, Daytona Beach, FL
PHONE: 904-255-1401 x372

Jackie Robinson Stadium
DESCRIPTION: At the entrance to this minor league baseball stadium used by the Daytona Cubs, a commemorative statue of Jackie Robinson being idolized by two youths, was dedicated in 1990. Jackie played his first exhibition game here while on the Brooklyn Dodgers farm team (Montreal Royals). When Jackie played here for the Royals, it was the first time that Black and White teammates played professionally and precedes his years in Major League Baseball. The stadium was also known as City Island Park during the Negro Leagues Baseball era which extends its use back more than 70 years.
ADDRESS: 105 East Orange Ave at City Island Parkway, Daytona Beach, FL
PHONE: box office 904-257-3172

Howard Thurman House
DESCRIPTION: Constructed in 1899, an ancient, oak tree watches over Dr Howard Thurman’s childhood home. Flora and fauna permeate the space between houses giving this old neighborhood a charming quality. Though under appreciated in the annals of the Civil Rights Movement, Dr Thurman taught the principals of “Ghandian non-violent protest” to Martin Luther King, Jr and others during his tenure at Morehouse College in Atlanta. On the National Register of Historic Places and the Florida Black Heritage Trail.
ADDRESS: 614 Whitehall Street, Daytona Beach, FL
PHONE: 386-822-7598 or 386-258-7514