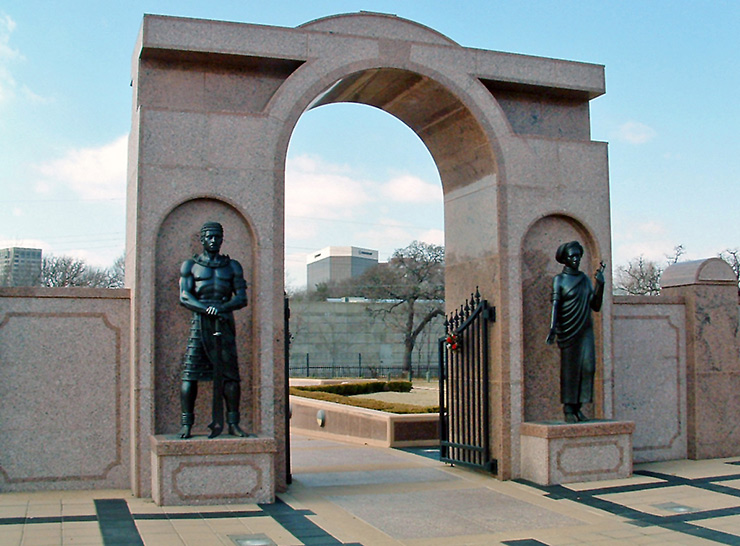 Freedman’s Cemetery
DESCRIPTION: Interred remains of over 7,000 African Americans rest here from the days of the original Freedman’s Town in a small section of North Dallas. As years passed, the boundaries of Freedman’s Town have been the victim of “metropolitan progress” for Dallas, such as freeway construction. Happily, better times are ahead; Dallas City Council designated the cemetery a historic landmark and plans are underway to construct a $1 million memorial in a triangular site.
ADDRESS: west side of North Central Expressway, between Lemmon Ave and Hall Street MAP

Deep Ellum
DESCRIPTION: This district is considered the most historic of numerous black districts in Dallas since it began in the early 20th century. Its claim to fame was great Blues music starting in the 1920s.
ADDRESS: roughly bounded by Elm Street, Trunk Ave, Commerce Street and Hawkins Street MAP

Knights of Pythias Temple
DESCRIPTION: In its day, this building was considered a near skyscraper. It was constructed by black craftsmen in the Knights of Pythias as their state headquarters in 1915. The building was designed by William S. Pittman, the 1st Black architect in Dallas. The site is designated a Dallas Historic Landmark since 1989.
ADDRESS: 2551 Elm Street, Dallas, TX MAP
PHONE: 214-428-6701

Universal Life Insurance Building
DESCRIPTION: The historic location of this black life insurance company was next to St. Paul CME Church. Unfortunately, the building was destroyed for a new development, without installing a notable monument in its place.
ADDRESS: 1800 Routh Street, Dallas, TX MAP

Tenth Street Historic District
DESCRIPTION: It is the oldest relatively intact Freedmen’s Town in Dallas with many of its original buildings still standing. It was considered a starter neighborhood for African Americans soon after Emancipation. Most of the remaining historic houses were built between 1890 and the early 1940’s in various folk designs such as shotgun, double shotgun and camel back. These modest houses are indicative of the skill and artistry of Black craftspeople.
ADDRESS: bounded by Clarendon, Fleming, 35E Freeway, 8th and Plum, Dallas, TX MAP

Wheatley Place Historic District
DESCRIPTION: Named for the poet Phyllis Wheatley, this district consists mostly of wood frame bungalows dating from 1916 to the mid-1930s. It is one of Dallas’ first planned residential areas for black families and it attracted Black ministers and business leaders. It was deliberately constructed to segregate African American housing in Dallas in the early 20th century.
ADDRESS: bounded by Warren, Atlanta, McDermott, Meadow, Oakland and Dathe Streets, Dallas, TX MAP

Hamilton Park Neighborhood
DESCRIPTION: This 175-acre neighborhood, developed in 1953, was one of the first suburbs in Texas built explicitly for African Americans.
ADDRESS: Forest Lane at Schroeder, Dallas, TX MAP

Romine Avenue Historic District
DESCRIPTION: This district in South Dallas was built for African Americans in early 20th Century Dallas. Seventeen houses in the district, built between 1928 and 1940, were the first to be constructed of brick and stone and were historically occupied by prominent educators, hotel proprietors and Pullman Porters.
ADDRESS: Romine Avenue between Octavia and Latimer Streets, Dallas, TX MAP

Dallas Black Chamber of Commerce
The chamber is an advocate for the creation, growth and general welfare of the African American business in Dallas.
ADDRESS: 2838 Martin Luther King Blvd, Dallas, TX MAP
PHONE: 214-421-5200

James E. Guinn School
DESCRIPTION: James E. Guinn, the son of former slaves, grew up in Fort Worth and was educated in the city’s earliest school for African Americans. After serving as a professor at Prairie View College, Guinn returned to Fort Worth in 1900 to become the principal of South Side Colored School, the city’s first African American public school. The school was later rebuilt and renamed for Guinn after his death in 1917.
ADDRESS: 1200 South Freeway, Fort Worth, TX MAP