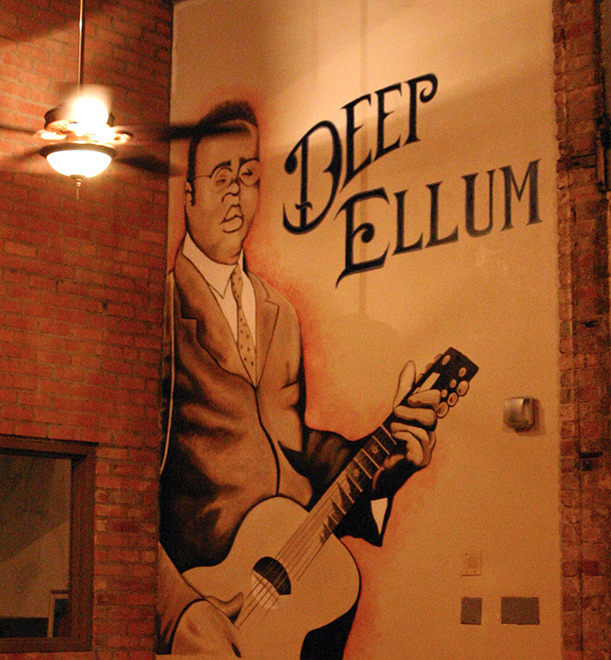 In the 1920s, Deep Ellum was both a local and national center for Blues and Jazz artists, following Beale Street in Memphis and Bourbon Street in New Orleans. Like all cities, such districts were ravaged by time. But Deep Ellum maintained a certain flair and luck that retained its musical vitality — thus far.

Ask any Jazz or Blues historian, aficionado, or avid fan, and they’ll tell you that there were numerous Jazz and Blues virtuosos who established reputations in Deep Ellum. Legendary performers like Blind Lemon Jefferson, Huddie “Leadbelly” Ledbetter, Little Hat Jones, Emma Wright, Sam “Lightnin’” Hopkins and others, lit up the streets, excited the crowds and imparted their brilliant talents and distinctive sounds night after night upon Deep Ellum.

The great thing about these musicians and many of the others who performed, and in some cases lived, here during the 1920’s and 30’s Jazz and Blues era, is that they weren’t popular with just black folk. Some had wide crossover appeal, and as a result their individual panache and influence on the genre had a lasting impact on American popular music as well. And because of them, during this particular time in history, Dallas was reportedly known as “one of the hottest cities in the South.”

When Deep Ellum first became entertainment central in Dallas in the 1930s, about a dozen nightclubs, cafes, saloons and domino parlors dotted the neighborhood. Over the next 30 years, more nightclubs popped up. Pianist Sam Price reportedly once said, “Deep Ellum was “a breeding ground, a place where musicians started out, and when they were good enough they left, went on to Kansas City and New York. In Deep Ellum there were more Blues singers than just about anywhere else.”

With so much great talent about, it wasn’t long before Deep Ellum and its artists began to draw many record label scouts, recording studios—both new and offshoots–and the like to Dallas. This further solidified Dallas’ position as a verifiable city in which to discover and enjoy great Jazz and Blues, and earned the city a reputation, in some circles, as one of the nation’s leading producers of Blues music.

Deep Ellum was also a respectable haven for Jazz. In fact, it attracted a range of clubs that featured local, regional and national acts. You could really get your groove on. For example, the upscale Sambuca Jazz Club was located here before moving to Uptown. Reading the shift in demographics instead of choosing the best “historic fit” in Deep Ellum, House of Blues chose to open in Victory Park.

Like the West End, Deep Ellum is losing patrons to newer venues in Victory Park, and Uptown and Greenville Avenue. Deep Ellum, is now left with a combination of regional Blues, Jazz, Rock, Reggae, Hip-Hop acts performing in clubs, tattoo parlors and a couple of craft shops. What shall become of this historic area in transition?