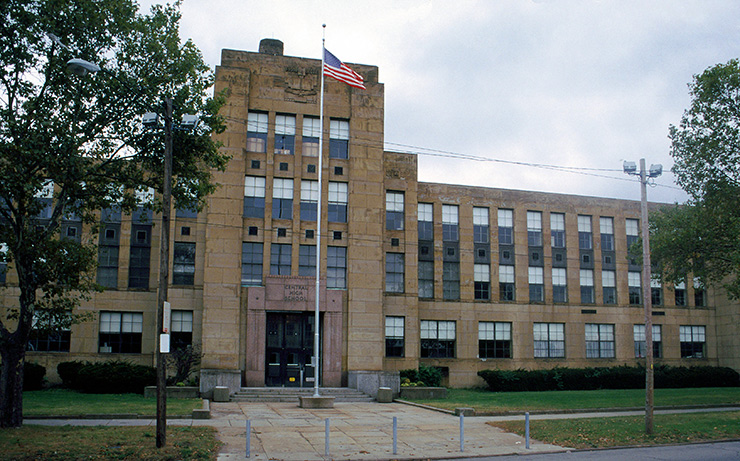 Cleveland History begins in 1786, when after the American Revolutionary War, Connecticut reserved some 3.5 million acres of the newly opened Ohio country in the northeast. Moses Cleaveland was sent out to oversee development of the land, and the completion of plans for a new town. After Cleaveland and a survey party of 22 arrived at the mouth of the Cuyahoga River on a land exposition for Connecticut Land Company, he founded the City of Cleveland in 1796. As more settlers came to the area, the “a” was dropped from the city’s name.

Like Philadelphia, Boston, Detroit and Toronto, Cleveland was a hotbed of the Abolitionist Movement. The American Colonization Society had a branch in the area supporting efforts to free black slaves and repatriate them to Liberia. With its border on Lake Erie across from Canada, Cleveland (and its Suburb Oberlin) was a heavy traffic location on the Underground Railroad from 1830-1861. By the 1840’s integration of public facilities was commonplace. African Americans in Cleveland were better off then their brethren in most other northern cities, but this can be partially attributed to the fact that they weren’t many in number.

A mass migration of Blacks from the south occurred between 1890-1915. Black population increased to 10,000 in the city. As more African-Americans arrived, previous citizens knew it meant competition for public resources and jobs. Due to the hierarchy of discrimination, African Americans became the lowest rung on the socioeconomic ladder, after Italian and Jewish immigrants. The outcome was predictable. African-Americans were shut out or limited from attaining work opportunities in the steel mills and foundries, which were the economic backbone of the city. By 1910, only 10% of trade crafts consisted of black members.

Shut out from higher paying jobs, African Americans became more self-reliant. This philosophy was manifest in the work of Garrett Morgan, who owned a tailoring shop and a car. The latter gave him the distinction as one of the few African Americans to own a car in the state of Ohio. Owning a car inspired Morgan to invent the stop sign in August 1914. He received a patent for it in 1923. Morgan also invented the gas mask which protected American soldiers from mustard gas during World War I.

Since African-Americans were limited to small numbers of military enlistment, Anglo-Americans predominantly went to World War I. This situation created a labor shortage quickly filled by African-Americans. As jobs increased, so did black population. The large increase of African-Americans meant more encounters with blatant job discrimination as Anglo-American veterans returned after WWI to compete for jobs in Northern cities. Cleveland was no exception in that regard.

Several responses emerged to racial injustice. Integrationist groups like the Future Outlook League and the Cleveland NAACP fought job discrimination. Another breed of leaders, led by Herbert Chauncey, favored developing black institutions based on community economics, rather than integrationist philosophies.

The increase in African-American population slowly increased Black political power. In 1927, three African-Americans were elected to the city council. By 1930, there were over 70,000 African-Americans in the city. Then the 1930s Great Depression hit Cleveland with massive job loss, like every other city.

The political and economic structure dramatically changed after World War II, when Cleveland’s Black population mushroomed to 250,000 by 1950. Activities of the Congress of Industrial Organizations helped African-Americans get jobs and remove aspects of discrimination, particularly in hospitals and hotels. By 1967, large African-American population and voter registration increases ushered in Carl Stokes as the first black mayor of a major American city. Meanwhile, White Flight from the city eroded the tax base before new African-American jobs could pick up the slack.

After 25 years of economic turmoil, Cleveland is regaining its legs and public confidence. Don King has an investment interest in the city’s oldest Black newspaper. Many celebrities gleefully claim it as home. Cleveland authorities had the wisdom to acknowledge many heroic efforts in the Hough community, by building a monument. Smart urban planning in Cleveland, like Baltimore, St. Louis, and Memphis, has renewed the city in ways every tourist can appreciate. Political leadership by a series of smart black mayors, councilpersons and activists was instrumental in the city’s comeback. But like most of cities, Cleveland Police Department relations with the black community has a ways to progress.