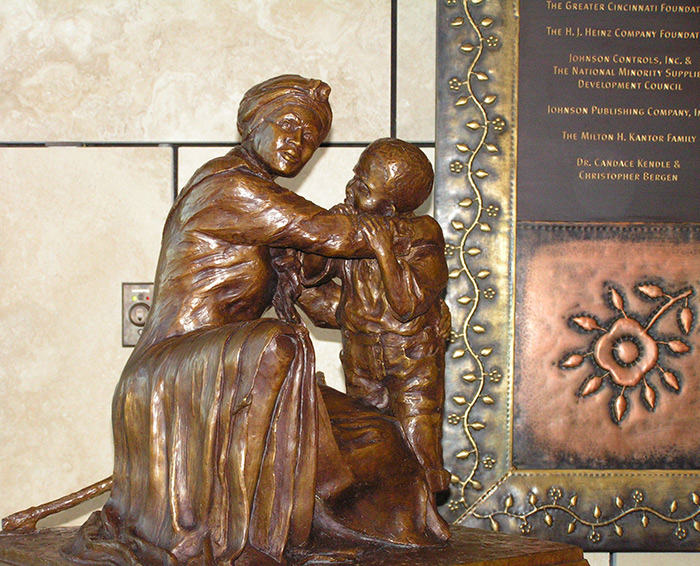 Geography matters. Cincinnati is the Underground Railroad’s Grand Central Station due to being one of three primary routes to freedom from the south. One ran along the east coast. A second along the Mississippi River. The most heavily traveled route was crossing the Ohio River from Northern Kentucky to Cincinnati, where it is estimated that some 30,000 people escaped slavery.

Cincinnati was a favored destination because people who escaped slavery lessened their chances of being re-captured because the Ohio River formed a boundary that horses could not easily cross.

Perhaps the most compelling draw for escaped slaves, were the scores of Cincinnati-Northern Kentucky abolitionists who organized an expansive Underground Railroad. Those abolitionists included the great Levi Coffin, an Anglo-American who was said to be the President of the Underground Railroad because he helped over 3,000 enslaved people reach freedom. Another key key figure, John Rankin, an Anglo-American Presbyterian preacher and father of Harriet Beecher Stowe, wrote Uncle Tom’s Cabin. Those Anglo brothers, along with freed slaves like John Parker and James Brawley, provide irrefutable evidence that the forefront of the anti-slavery movement was Black and White.

Although most African Americans traveled through Cincinnati and Ohio to points north, many stayed. In 1829, African-American citizens comprised 10% of city population. They lived in Bucktown district. In 1834, the “Great Lane Debates” over slavery were held in Cincinnati at Lane Theological Seminary. Many historians regard these debates in Cincinnati as helping to shape President Abraham Lincoln’s position on slavery, ultimately leading to his signing the Emancipation Proclamation on 1 January 1863.

Cincinnati, like Baltimore in another border state, felt the nation’s bipolar disorder concerning slavery more profoundly than most. With Fugitive Slave Laws at their behest, pro-slavery economic interests sent bounty hunters to Cincinnati to retrieve people who escaped slavery. This bipolar disorder influenced many Anglo-Americans and certainly most European immigrants to develop a complex set of emotions about free African Americans. The typical sentiment became they are free in this Northern state and have rights, but I don’t want them competing for my job or as my neighbor.

Despite their precarious geographic location, Black Cincinnatians pushed forward in religion, education and commerce. With it’s sophisticated network of conductors, proximity north of the Ohio River and defiant free African Americans, Cincinnati was the Grand Central Station of the Underground Railroad. So you know the party was on when the Civil War ended in April 1865.