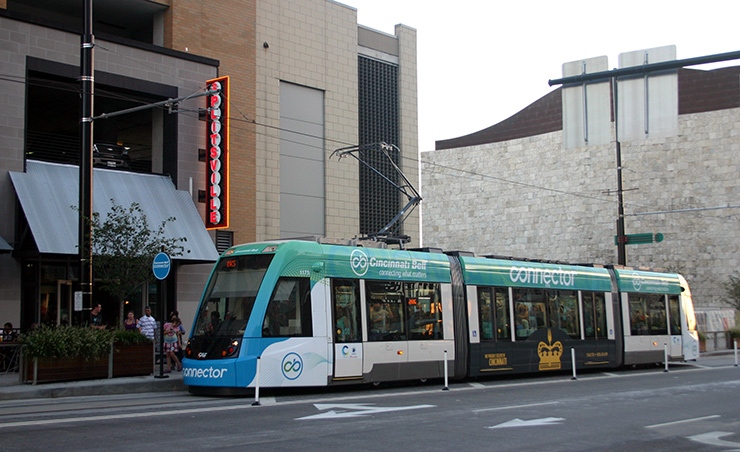 Car Rentals: Alamo, Avis, Budget, Dollar, Enterprise, Hertz, National and Thrifty are located at the airport. When you drive across the Ohio River via the interstate freeway from Northern Kentucky into downtown Cincinnati, there is NO bridge toll. Taxis: catch them in the baggage claim area of Terminal 3 or call 859-767-3260 or use the courtesy phone near the exits of Terminals 1 and 2 to arrange for 24-hour service. One-way from the airport to downtown costs about $25. You can hail a taxi at most downtown Cincinnati hotels. Less expensive Shuttles to downtown cost $14 one-way and $24 round-trip. Board outside baggage claim or call 859-261-8601 or 800-990-8841 to schedule hotel pickup.

The gradual decline of Midwest passenger train service since 1952 led to near abandonment of Cincinnati Union Terminal. Fortunately, it was saved from the wrecking ball and primarily converted to a museum center. Amtrak saved train service between Chicago, Indianapolis, Cincinnati and Washington, but passengers are confined to a small waiting area in back of the terminal at 1301 Western Avenue and service only 3 times per week on this route:

Perhaps by 2021, construction to upgrade Amtrak service in the Chicago-Indianapolis-Cincinnati corridor will commence. If so, the corridor will reach 110 mph and as many as 6 daily trains, like Amtrak Chicago-Detroit and Chicago-St. Louis corridors today. For more context on this important subject, see Interstate High Speed Rail.

Cincinnati Freeway Network connects Interstates 71, 74 and 75 downtown and near the riverfront. This metro area relies on an extensive freeway network and several bridges between Downtown, Northern Kentucky, the airport and suburbs. Since Cincy has no repaid transit, morning or evening commutes hour drives to/from Downtown are daunting.