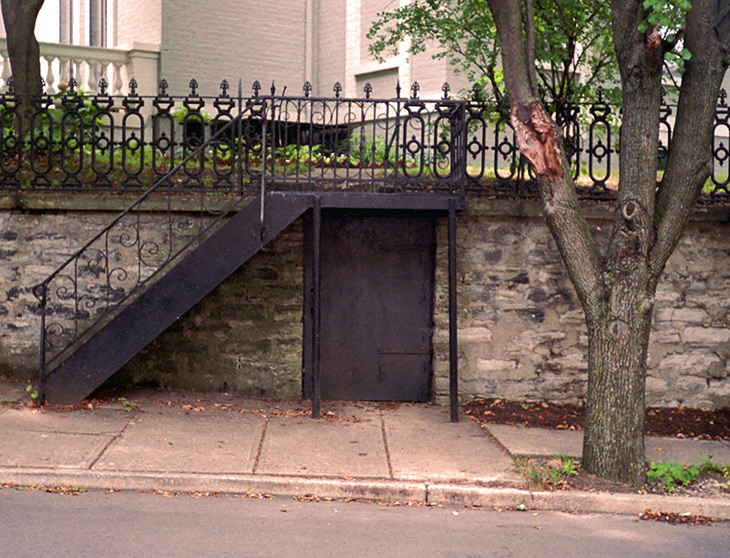 Tunnel door to the Underground Railroad in Covington, Kentucky

Cincinnati History begins with its prime location on a bend of the Ohio River, which attracted nomadic Native-americans to the regions. Later, the city became the industrial, commercial and cultural center for Ohio, northern Kentucky, and the southern Indiana. Founded in 1788 as Losantiville, it name-changed to Cincinnati in 1790 to honor The Society of Cincinnati, an organization of former Revolutionary War officers. Plentiful work attracted many different ethnic and racial immigrants, the largest being Germans.

By the mid-1830s, thousands clustered north and east of the Miami-Erie Canal that once flowed through town, calling their new neighborhood “Over-The-Rhine” because it reminded them of the Rhine River in their native land.

African Americans first came to the area in 1810, before the city incorporated in 1819. They were attracted to jobs in the riverbank slaughterhouses considered undesirable to most other groups. Cincinnati earned the nickname “Porkopolis” due to its thriving meat packing industry of the time. A great influx of free African Americans, newly freed slaves and escaped slaves found Cincinnati irresistible.

There were several reasons free African Americans settled in Cincinnati. For most of the 1800’s, Cincinnati was the sixth largest city in the nation and larger than Chicago. Travelers stopped here before going to St. Louis and points west. With such a large city population, the 5,000 African-Americans (per the 1820 US Census) hoped to blend in better. Various levels of formal education were available in and around Cincinnati, which could make a big difference in the kind of life they led.

African Americans were denied entry into public schools and Ohio enacted Black Codes restricting movement and advancement. Of course, that state of affairs was common nationwide, so it did not stop Black immigration to Cincinnati. George Washington Williams, an author, became the first Black official elected in the Ohio State Assembly. Not fooled by token progress and access to political power, African Americans opened their own school of advancement many miles northeast of the city.

From 1890 to 1930, African American migration mirrored the industrial job growth of the city. The bitter and constant reminders of racial discrimination bolstered NAACP membership and later the Universal Negro Improvement Association, which at one point had 8000 members in the city. Another job boom for African Americans occurred during World War II. It attracted more Black immigrants, who mostly settled in the West End district where cramped and inferior housing were the norm.

By 1950 more housing options opened for inner city residents, as highways and malls promoted urban sprawl by the middleclass to the suburbs. When jobs and resources get scarcer in a city, it brings out the worst in everyone. Latent racism in the city became more pronounced, triggering race riots in 1967 and more White Flight afterwards. The latter factor helped usher in some degree of Black political empowerment. Between 1972 and 1991, the city had three black mayors, Theodore Berry, J. Kenneth Blackwell, and Dwight Tillery, as well as the theatrical and controversial former mayor, Jerry Springer.

Unfortunately, the city’s race problems were exacerbated by allegations of murder by rogue police officers. It did not help that an official review of the matter let the rogue police officers walk. Riots ensued. In fairness to the many police officers who protect & serve, its important to emphasize that most of Cincinnati’s finest were not rogue cops. Furthermore, many other American cities experience the same conditions, but avoid the flashpoint where justifiable emotions are overcome by the unreasonable actions of a few.

The Black Chamber of Commerce chapter, founded by James Clingman, deserves some of the credit for the city’s transition back to a positive image. Another huge step forward was the corporate and municipal support, which opened the stunning National Underground Railroad Freedom Center.