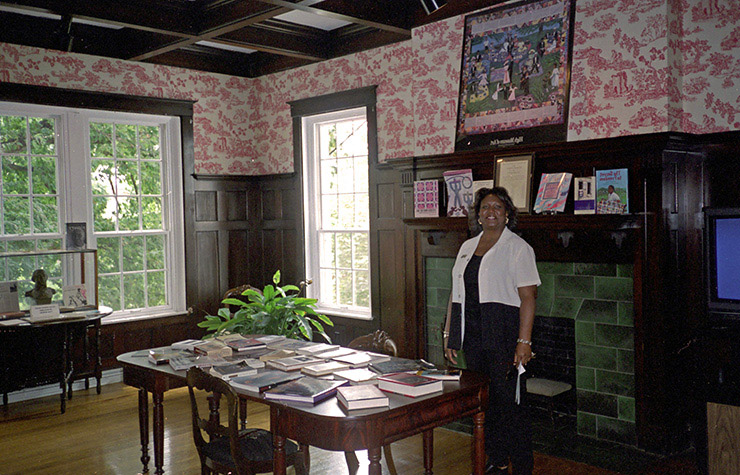 Cincinnati Riverfront
Public Landing at the foot of Broadway and the Ohio River was called the “Levee”; African American steamboat workers gathered and many slaves started their escapes from Southern masters at this location; today it fittingly hosts the annual Black Family Reunion.

Sixth & Broadway
The location of early African-American ships, inns and the first location of Allen Temple AME Church in 1824 and Scholey’s Green, a private African American school that opened in 1826; African-Americans defended themselves against White mobs there in 1836 and 1841; the Civil War assembly point for the Black Brigade, which built defensive fortifications in northern Kentucky during the Siege of Cincinnati, 1862.

Sixth & Culvert Streets Corner
Sixth and Culvert Streets and Deer Creek, now Eggleston Avenue, was the site of the first African American church in 1809 with William Allen as pastor

Sixth & Elm Streets
The northwest corner was the “Dispatcher’s Office” of the Underground Railroad; it was a store and another home of famed abolitionist Levi Coffin.

Jennie D. Porter Middle School Site
Jennie (1875–1936) was an educator, founder and first principal of Harriet Beecher Stowe School; she was the first African-American woman to be a school principal in Cincinnati and receive a doctorate in education at the University of Cincinnati
ADDRESS: 1030 Cutter Street, Cincinnati, OH

Sterling Hotel Site
Sites of a Black-owned hotel and home of the Cotton Club, the premier African American night club from the 1930’s to the 1950’s
ADDRESS: Sixth & Mound Streets, Cincinnati, OH

Levi Coffin Residence
Site of the early home of abolitionist leader, called Otis Station; Coffin was considered by some to be, along with Harriet Tubman, the most important figure in the Underground Railroad; now the site of the School for Creative and Performing Arts
ADDRESS: 13th & Sycamore Streets, Cincinnati, OH

Carneal House
A jumping off point for slaves who escaped via the Underground Railroad; a tunnel under the house leads to the Licking River
ADDRESS: 504 Second Street, Cincinnati, OH

Spring Grove Cemetery
Established in 1845 by Dr. Daniel Drake and designer Howard Daniels as the largest non-profit private cemetery in the United States (733 acres); the gravesite of legendary abolitionist Levi Coffin is at this elite cemetery, which is also one of the most visited tourist destinations in Cincinnati. Coffin’s majestic headstone features a tribute to his leading role in the Underground Railroad. It also features 12 ponds, Gothic architecture, an impressive overlook, and many mausoleums dot the landscape. Trees are identified and some seem as old and as large as the worn headstones.
DAYS & HOURS: 10a-6p winter and 10a-8p summer
ADDRESS: Winton Place off Spring Grove Avenue, Cincinnati, OH
PHONE: 513-681-7526
WEBSITE: http://www.springgrove.org

Wright House Bed & Breakfast
Ohio calls it the most authentic, undisturbed Underground Railroad Station in the nation; built in the Federal brick-style in 1815 Jonathan Wright; on the National Register of Historic Homes; includes the fingerprints of people of people escaping slavery and many of their artifacts; lobby features wood plank floors, nine-foot doors, and a curved floating staircase; the home is furnished with antiques, a parlor, pump organ, Victorola, player piano, and oriental rugs; only has two guest rooms with private baths; gourmet breakfasts included; senior discounts and tours of the house available
ADDRESS: 80 West State Street; Springboro, OH
PHONE: 866-748-0801 or 937-748-0801