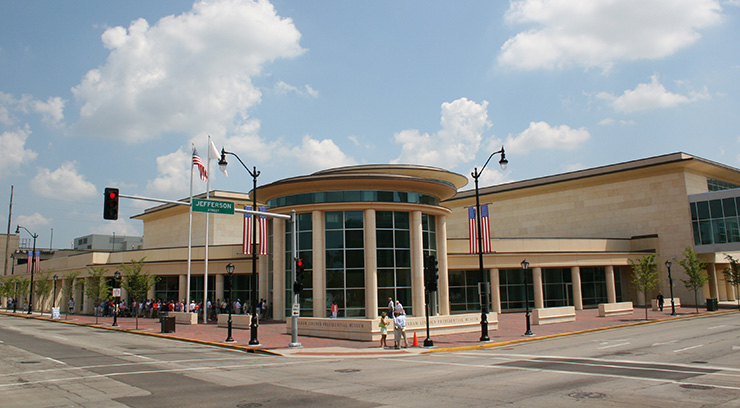 Springfield became the Illinois state capital in 1837 with the help of young lawyer, Abraham Lincoln. Mr. Lincoln lived in the city until he left to become the 16th President of the United States. Given the Civil War, he made the most important decision any U.S. president has ever made. He was buried here after the assassination. In short, Lincoln’s life is a Great American Story.

Only the Lincoln Presidential Museum tells this Great American Story with scholarship and showmanship that even the Smithsonian would envy. The museum uses 21st century technology to immerse visitors in a world of gas lamps and hoop skirts. You could read a hundred books about Lincoln’s world, but none give you the sense you get from one visit here – how important his life was it to African Americans and to America in general.

Your experience begins in a rustic Indiana cabin, travels with Lincoln down the Mississippi to confront the horrors of slavery, interpret the complicated presidential election of 1860, get the backstory of Lincoln’s White House and the petty jealousies confronted by First Lady, Mary Todd Lincoln.

Listen to black servants gossiping in the White House kitchen about the possibility of Emancipation as Lincoln and his cabinet debate issues that precipitated the Civil War. Bored with museums that only feature wall exhibits and books? Not to worry. A Holavision special effects presentation takes you on an exciting journey into the heart of the Presidential Library archives. Mrs. Lincoln’s Attic lets kids dress up and play the games that diverted Tad and Willie Lincoln. Illinois Gallery is home to a rich menu of world-class changing exhibits on American history and the colorful panorama of Illinois.

Scholars will not be disappointed either. The museum is home to Lincoln’s Presidential Library of 47,000 books, manuscripts, photographs, paintings, sculptures, artifacts and campaign material, including 1,500 original documents written by Mr. Lincoln. You can get a thorough understanding of why he was known as Honest Abe and his personal fortitude to end slavery, despite objection by most of his cabinet and most of Congress. For these reasons, history smiles on Abraham Lincoln.

While in Springfield, visit the Great Western Railroad Depot where Lincoln left for Washington on 11 February 1861. And finally, Abraham, Mary and three of their four sons, rest under a 117-feet granite obelisk tomb. Every Tuesday evening from June through August, the 114th Reactivated Civil War Infantry Unit performs a flag retreat ceremony at what may be the tallest tomb in America.

Although Springfield lies 200 miles southeast of Chicago, Amtrak has many daily trains to and from Chicago that make Springfield an easy day trip.