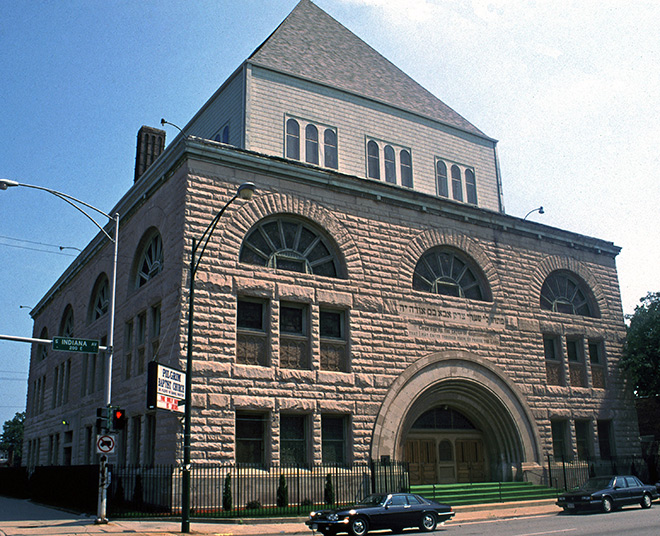 Pilgrim Baptist Church before the fire

First Church of Deliverance
DESCRIPTION: Founded in 1929 by Rev. Clarence H. Cobbs. It is one of the first Black churches to broadcast sermons and gospel music on the radio; first church to receive a Hammond organ. With many songs like How I Got Over making there debut here, the church played a large role helping gospel music reach prominence; Walter T. Bailey designed the building, which opened in 1939. It also features murals by Fred Jones. Bailey was the city’s first Black architect; another architect added the twin towers to the terra cotta facade in 1946.
SUNDAY WORSHIP: 11a & 7p
ADDRESS: 4301 South Wabash Avenue, Chicago, IL MAP
RAPID TRANSIT: 43rd Street CTA Station
PHONE: 773-373-7700
WEBSITE: http://www.firstchurchofdeliverance.org

Fellowship Missionary Baptist Church
DESCRIPTION: Founded in 1950 the same year Pastor Clay Evans was ordained; in 1954 the church converted an old garage at 4621-23 South State Street to be its new home. Rev. Evans was one of the first Chicago ministers who publicly joined Dr. Martin Luther King, Jr. in Civil Rights Movement. Hampered by its activist stance, the church could not obtain sufficient bank loans to expand — a new edifice would have to be built on tithes. What a joyous day when Evans led a 1,500 car motorcade to the church’s present location in 1966.
SUNDAY WORSHIP: 10:30a
ADDRESS: 4543 South Princeton Avenue, Chicago, IL MAP
RAPID TRANSIT: 47th Street-Red CTA Station
PHONE: 773-373-8530
WEBSITE: http://www.fellowshipchicago.com

Mosque Maryam
DESCRIPTION: In 1972, Elijah Muhammad opened this stunning Temple #2 and school as the Nation of Islam headquarters. Following the 1975 death of Elijah Muhammad, the NOI took on a new direction under his son Wallace D. Muhammad. In 1977 Minister Louis Farrakhan returned to the NOI and decided to resurrect the teachings of the Elijah Muhammad. In 1988, Temple #2 was purchased and renamed to Mosque Maryam — after Mary, mother of Jesus. Every February 26th, Saviour’s Day is hosted here in remembrance of his Elijah Muhammad’s birthday.
SUNDAY WORSHIP: 10a
ADDRESS: 7351 South Stoney Island Avenue, Chicago, IL MAP
RAPID TRANSIT: Stoney Island Metra Station
PHONE: 773-324-6000
WEBSITE: http://www.noi.org/maryam.html