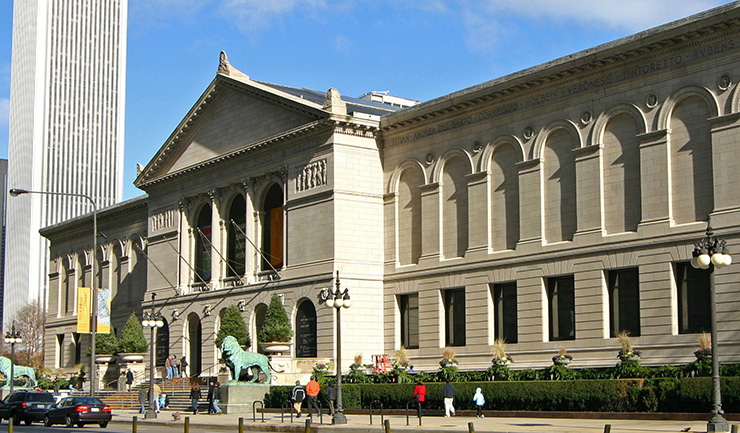 Pritzker Pavillion
DESCRIPTION: Opened in 2004 as the flagship of Millennium Park, this music pavilion is the new home of the Grant Park Symphony Orchestra and Chorus and the Grant Park Music Festival. It is the nation’s only remaining free outdoor classical music series. It is also home to Chicago Jazz Festival. Given that there are historic and legal limitations on the height of buildings in Grant Park, the city classifies the band shell as a work of art rather than a building. It features an overhead trellis sound system that replicates an indoor concert hall sound and is warmly saluted by critics.
ADDRESS: 201 East Randolph Street, Chicago, IL MAP
PARKING: Millennium Park Garage, Grant Park North, Grant Park South and East Monroe Garages
RAPID TRANSIT: Metra Millennium Station
WEBSITE: http://explorechicago.org

Goodman Theater
DESCRIPTION: Founded in 1925 as a tribute to Chicago playwright Kenneth Sawyer Goodman. The exciting, but hard to categorize collection of plays is to be expected since the theater is a laboratory home to the Goodman Artistic Collective, a diverse group of some of the most exciting directors, actors, writers and designers of our age. Prior to November 2000, the Goodman was housed in the Art Institute of Chicago. Since then it relocated to this state-of-the-art, two-theater complex in the Loop Theater District, Goodman’s has become nationally recognized for its Education and Community Program that introduces children to live theater.
BOX OFFICE: Mon-Fri 10a-5p, Sat-Sun Noon-5p; at 10a daily, all remaining mezzanine tickets for the current day’s performances are half-price
ADDRESS: 170 North Dearborn Street, Chicago, IL MAP
PARKING: Government Center Self Park adjacent to theater; get your ticket validated for a discount
RAPID TRANSIT: CTA Clark-Lake Station
PHONE: 312-443-3800
WEBSITE: http://www.goodman-theatre.org

Chicago Theatre
DESCRIPTION: Opened in 1921 to present the best in live and film entertainment, including Duke Ellington. The six-story Chicago marquee adorning this 3,600-seat theatre was redecorated for the 1933 Chicago World’s Fair and includes an original Mighty Wurlitzer Organ. In the 1970s, Chicago Theatre was the victim of a complex web of factors causing it to close in 1985. But public-private efforts began to save and restore this ornate structure. It reopened in all its grand beauty one year later. Since then Jill Scott, Cedric The Entertainer, Aretha Franklin, Johnny Mathis, Al Jarreau, Patti LaBelle, Barry White, Prince and The Isley Brothers have performed here along with special movies. Call for tour dates and more info.
BOX OFFICE: Mon-Fri Noon-6p and 2 hours prior to show time
ADDRESS: 175 North State Street, Chicago, IL MAP
PARKING: Randolph Wabash Self-Park on Randolph is closest
RAPID TRANSIT: Lake CTA Subway Station, State-Lake CTA Elevated Station, Randolph-Michigan Metra Station
PHONE: 312-462-6300
WEBSITE: http://www.thechicagotheatre.com

Oriental Theatre / Ford Center for the Performing Arts
DESCRIPTION: Opened in 1926 as a first-run movie palace and complemented with stage shows, the 2,200-seat auditorium has a dream-like décor. The Three Stooges, Cab Calloway and Duke Ellington have played here. The theater continued to feature films until the 1970s, when it presented concerts by Stevie Wonder, Gladys Knight & The Pips and many others before its demise. It closed in 1981 and was nearly torn down, but a public-private venture restored and renamed it Ford Center for the Performing Arts in 1997-98, to premiere the play Ragtime. It continues today as a dynamic pre-Broadway venue.
BOX OFFICE: hours vary here and Bank of America Theatre, Cadillac Palace Theatre, Auditorium Theatre and Broadway Playhouse.
ADDRESS: 24 West Randolph Street, Chicago, IL MAP
PARKING: InterPark at 20 East Randolph, discount parking with ticket stub
RAPID TRANSIT: CTA State-Lake Station and Metra Randolph-Michigan Station
PHONE: 312-782-2004 or 312-977-1700
WEBSITE: http://www.broadwayinchicago.com

Cadillac Palace Theatre
DESCRIPTION: Opened in 1926 with a richly appointed interior with 2,500 seats was inspired by the palaces of Fontainebleau and Versailles. As a one-time vaudeville house, Jimmy Durante, Mae West, Jack Benny, and Bob Hope sharpened their skills here. In 1931, the theatre was converted into a movie palace. In the 1950s, it would occasionally book Broadway shows. In the 1970s, the auditorium was converted into a banquet hall. In 1984, the theatre, now renamed the Bismarck Theatre, was converted into a rock music venue. It was completely restored in 1999 and renamed the Cadillac Palace. It reopened with the premiere of Elton John and Tim Rice’s Aida. Since then, the Cadillac Palace has been the home to several pre-Broadway hits including The Producers, Mamma Mia! and The Lion King.
BOX OFFICE: hours vary here and Bank of America Theatre, Oriental Theatre, Auditorium Theatre and Broadway Playhouse
ADDRESS: 151 West Randolph Street, Chicago, IL MAP
PARKING: InterPark at Lake & Wells, discount parking with ticket stub
RAPID TRANSIT: CTA Lake Subway Station, CTA State-Lake Elevated Station
PHONE: 312-902-1400
WEBSITE: http://www.broadwayinchicago.com

Bank of America Theatre
DESCRIPTION: Opened in 1906 as the Majestic Theatre, it was the first venue in Chicago to cost over $1 million. It ran vaudeville acts every day, except Sunday. In 1932, during the Great Depression, the Majestic closed and remained empty for 15 years. In 1945, the theatre was purchased, restored and reopened as the Shubert Theatre. The stage became home to an stunning array of classic plays, including A Chorus Line. In 1991, Nederlander Organization purchased the building and continued to host a wide array of quality theatrical productions, including the Chicago premiere of “Rent” and is known as a pre-Broadway venue.
BOX OFFICE: hours vary here and Cadillac Palace Theatre, Oriental Theatre, Auditorium Theatre and Broadway Playhouse
ADDRESS: 18 West Monroe Street, Chicago, IL MAP
PARKING: InterPark at 55 East Monroe Street, discount parking with ticket stub
RAPID TRANSIT: CTA Monroe-Red Station and CTA Monroe-Blue Station
PHONE: 312-902-1400
WEBSITE: http://www.broadwayinchicago.com

Steppenwolf Theatre Company
DESCRIPTION: This esteemed performing arts institution is committed to artistically risky ensemble collaborations and through its work with it a permanent ensemble, guest artists, partner institutions and the community. Steppenwolf has redefined the landscape of acting and performance since its founding in 1976 as an ensemble of nine actors. Its grown into a renowned company of thirty-five artists whose talents include acting, directing, playwriting and filmmaking.
BOX OFFICE: 11a-5p Mon-Sat, 1p-5p Sun and open until 7p on days with evening performance
ADDRESS: 1650 North Halsted Street, Chicago, IL MAP
PARKING: garage just south of the theater
RAPID TRANSIT: CTA North-Clybourn Station
PHONE: 312-654-5622
WEBSITE: http://www.steppenwolf.org