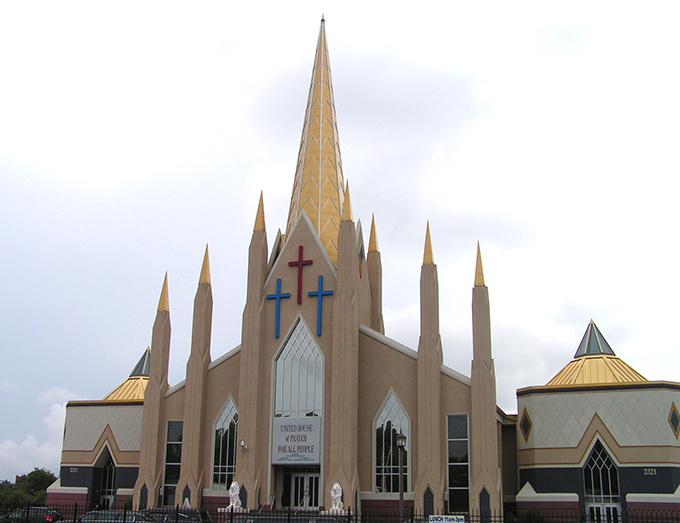 United House of Prayer for All People, founded by Sweet Daddy Grace

Charles Emmanuel Grace (1883-1960) was born in Cape Verde, off the coast of West Africa. He immigrated to America in the early 1900s and lived in New Bedford, Massachusetts. Influenced by Pentecostal and Evangelic ministers, he received a “Calling” to found his first church in New Bedford. Sometime after a trip to Egypt, Grace received another calling to move to the Brooklyn community in Charlotte. There, he founded the United House Of Prayer For All People in 1925. Word of his charismatic ministry grew from Charlotte and he acquired the fondly used name, Sweet Daddy Grace.

Members of his church were expected to attend service every day. At church, the congregation would take an hour “coming to the mountain” by singing, clapping, speaking in tongues, and feeling the spirit. There were also many claims the Sweet Daddy Grace healed people and changed lives for the better. With such frequent attendance, fervent followers and reports of good works, the church collected far more than average weekly offerings, enabling Sweet Daddy Grace to expand his church empire around the country and several places abroad. Sweet Daddy Grace attracted large tent revivals and lakeside baptism crowds.

Critics, uncertain of whether to call the early church a cult or sect, questioned his acquisition of such huge quantities of congregation money affording Sweet Daddy Grace fancy clothes, expensive cars, and a mansion in every city having his church. Some critics went farther and branded him a charlatan, based on these and similar alleged quotes from Grace: “If you sin against God, Grace can save you, but if you sin against Grace, God cannot save you” and “Anything God offers you, I got it.” His attention grabbing, long painted fingernails also drew their ire. A balanced view of Sweet Daddy Grace and his church’s work should note their extensive track record feeding, clothing and elevating the status of the poor.

Though Sweet Daddy Grace moved his headquarters to Washington, DC, he returned to Charlotte one week each September. Parades celebrating his visit became well known for their large attendance and pageantry. He died in his Los Angeles mansion, which had 85 rooms. Having been self-ordained before he died in 1960, the body of Bishop Charles Emmanuel Grace was returned to Charlotte for a final parade around his original church before burial in Massachusetts. Fitting the bravado of his life, the eulogy was delivered by … Sweet Daddy Grace on tape. Based on the good he did and other principles he taught, the legacy of Sweet Daddy Grace endures with over 3.5 million followers in the United House of Prayer for All People.