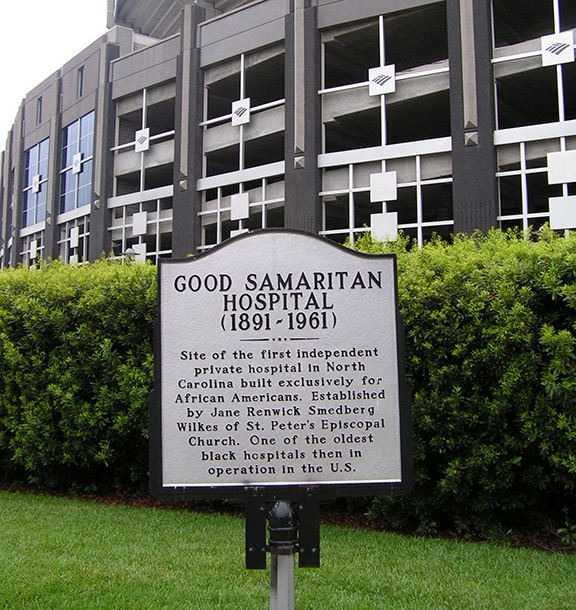 Though Native-Americans are the first inhabitants, King Charles II of England claimed the Carolina Colony in 1663. He then granted land that became North Carolina and South Carolina to eight loyalists. Charlotte was founded in 1768 and local citizens in honor of Queen Charlotte. They also named the surrounding county Mecklenburg after her German homeland. That’s why it is nicknamed “Queen City” today.

The discovery of a 17-pound gold nugget in 1799 began an influx of prospectors. A Charlotte branch of the U.S. Mint was established in 1837. The boom was short-lived and opportunists followed the louder call to California a few years later. After the Gold Bust, the cotton industry brought prosperity to slaveholders in the region, and with it came railroads to transport goods. African American slaves worked the fields, their labor driving the economy. Under constant supervision by overseers, slaves were forbidden to meet in groups or read. Slaveholders were paranoid of outsiders provoking slave rebellions. So unlike some other Southern states, they passed a North Carolina law prohibiting free Blacks coming to North Carolina.

In 1860, Charlotte’s citizen population of 1366 and its slave population were small. To defend its status as a slave-holding state, North Carolina joined the Confederacy. When the South lost the Civil War to the North, Union Soldiers occupied Charlotte. Their presence provided a safe haven for freed and escaped slaves. In 1867, Mrs. Henry Biddle of Philadelphia contributed money and Colonel W.R. Myers donated land west of Charlotte and the Presbyterian Church to establish Biddle Institute, a school to train black ministers.

Biddle Institute later became part of Johnson C. Smith University. In 1868, North Carolina was accepted back into the United States of America, and the state ratified the 14th Amendment to the Constitution, allowing African Americans the right to own property.

In 1877, when the Reconstruction Era ended, Northern troops withdrew and Jim Crow Apartheid rambled throughout the South. “Separate But Unequal” was quickly the order of the day. Hence, Myers Street Elementary School was opened in 1886 as the city’s first black public school. Other Colored schools in the city were founded with the help of northern philanthropist, Julius Rosenwald, which led to the opening Second Ward High School in 1923. Many “Shotgun” houses, grocery stores, drugstores, restaurants, insurance companies, contractor companies, law firms, medical practices, theaters, and newspapers opened were built in the Black communities. Many of these businesses settled in Brooklyn, the primary Black neighborhood in downtown Charlotte from the late 1800’s until the 1970.

Typical of insensitive urban renewal occurring nationwide from 1955-1980, Brooklyn was purged of 12 churches and hundreds of Black families were forced to move into formerly European American neighborhoods, such as Belmont and Wesley Heights.

On the brighter side, Charlotte elected a black mayor, Harvey Gantt, from 1981-1987. Gantt was nearly elected North Carolina senator twice, until incumbent Senator Jesse Helms played the race card to overwhelmingly win the rural vote. With the retirement of Jesse Helms in 2002, forward thinking candidates of all races and parties are accelerating progress in this great state for business, residents and tourists.