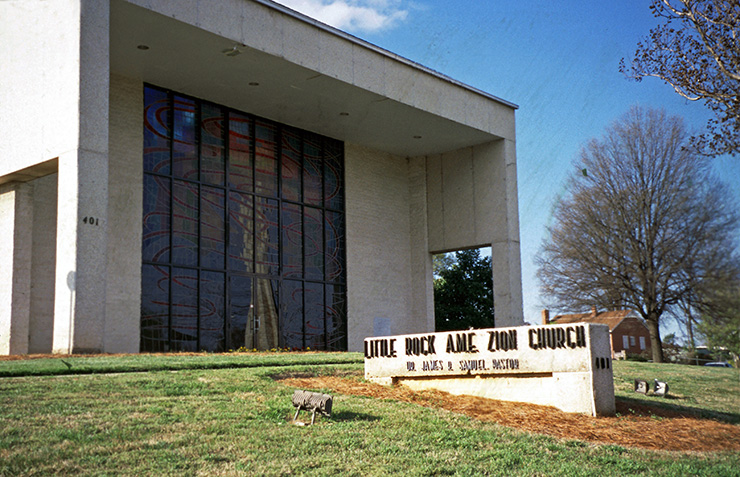 Historic AME Zion Church
DESCRIPTION: Formerly home to the Afro-American Cultural Center. Dr. Mary Harper and Dr. Bertha Maxwell established the Cultural Center here in 1974 as an outgrowth of the Black Studies Program at the University of North Carolina at Charlotte. In 1976, the AACC opened in Spirit Square Center for the Arts. In 1986, the Cultural Center moved to this facility. AACC featured feature two restored “shotgun” houses that date back to the 1890s — this type of home was the most common type of housing in Charlotte’s African American neighborhoods during the first half of the 20th century. AACC buildings are listed on the National Register for Historic Places.
DAYS & HOURS: Tue-Sat 10a-6p
ADDRESS: 403 North Myers Street, Charlotte, NC MAP

Cherry Community
DESCRIPTION: Established in the late 1800s to quarter domestic workers for nearby affluent European Americans of Myers Park. As a result, a number of black businesses, services and churches setup in the area.
ADDRESS: southeast of Center City, Charlotte, NC MAP

Historic AME Zion Publishing House
DESCRIPTION: Not the original structure, but it is the original site of one of the largest black-owned publishers in the country. The new, larger publishing house is in the suburbs. The site currently serves as the expanded NASCAR Hall of Fame.
ADDRESS: 2nd Street at South Brevard Street, Charlotte, NC MAP

Mecklenburg Investment Company
DESCRIPTION: The group formed in 1921 by several of Charlotte’s leading Black citizens. Their charter was to build this 3-story brick building, completed in 1922, in order to rent office space to local businesses and professionals. As a result the building became the focal point of Brooklyn’s Black community. Today, it is a National Historic Landmark.
ADDRESS: 233 South Brevard Street, Charlotte, NC MAP

Little Rock AME Zion Church
DESCRIPTION: Organized in 1884, in the backyard of Mary Ann Hunter after leaving old Clinton Chapel AME Zion Church. The first edifice was a little house sitting on a rock, hence the name, Little Rock. The original property was purchased for $425. In 1906, the structure was moved across Seventh Street. The moving process was so slow, a funeral had to be conducted while the church edifice was in the middle of the street. The edifice, more recently utilized as a cultural center, was completed in 1911. The current sanctuary was completed in 1981.
SUNDAY WORSHIP: 10a
ADDRESS: 401 North McDowell Street, Charlotte, NC MAP
PHONE: 704-374-1565
WEBSITE: http://littlerockamezion.org

Antioch Baptist Church
DESCRIPTION: Founded 1886, services were first held in the homes of church members. Land off Old Monroe Road was purchased for the first building was erected in 1900. Land beside the church is used as a cemetery for church members. A second edifice was erected in 1922. The third and current edifice was dedicated in 1975.
SUNDAY WORSHIP: 10:45a
ADDRESS: 232 Skyland Avenue, Charlotte, NC MAP
PHONE: 704-332-4951
WEBSITE: http://www.antiochfamily.org

United House of Prayer for All People
DESCRIPTION: This church became the new home for many in the congregation of the original UHP church that was torn down during urban renewal.
WORSHIP: Mon-Sat 7:30p, Sunday 11a
ADDRESS: 600 North Davidson Street, Charlotte, NC MAP
PHONE: 704-333-7883

McCrory’s Five & Dime
DESCRIPTION: Home to McCrory’s Five & Dime from 1937-97, this Old Town Bistro was a key point in the Civil Rights Movement on 12 February 1960 when Black students from Friendship Junior College in Rock Hill were denied service at McCrory’s lunch counter. Ten refused to leave and were arrested, 9 served jail time for refusing to pay for bail; these brave soldiers kicked-off the “Jail No Bail” protests that lasted for more than a year and ultimately desegregated the town and filled up the jail cells; these were the first Civil Rights sit-ins in South Carolina. Now you can enjoy a meal like everyone else.
ADDRESS: 135 East Main Street, Rock Hill, SC MAP