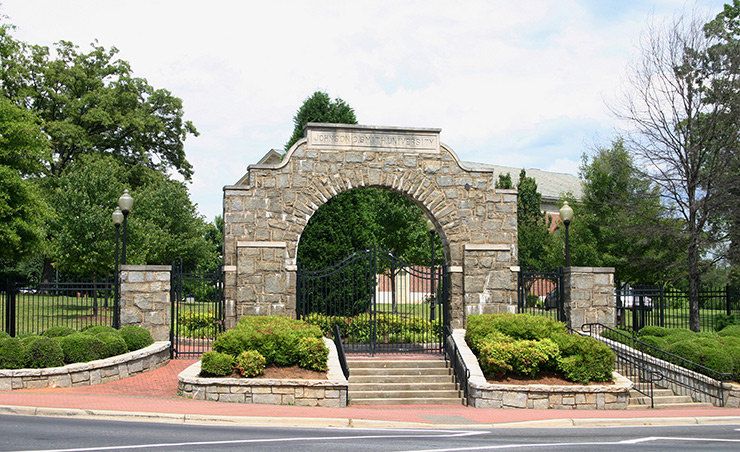 Charlotte cultural sites for black travelers are concentrated in Johnson C. Smith University and the Harvey Gantt Center, but otherwise spread around the city. Draw inspiration from these magnificent Afrocentric attractions.

One of Four Sculptures at The Square
DESCRIPTION: An African-American railroad builder is honored as part of the city’s historic importance as a transportation center.
ADDRESS: Trade at Tryon Streets, Charlotte, NC MAP

Johnson C. Smith University
DESCRIPTION: This HBCU was founded at a different site in Charlotte in 1867 with the mission to train black students. The college moved to this site during the early 1870s. Many original buildings on campus include Biddle Hall, a Romanesque Revival centerpiece of the campus built in 1884, Carter Hall a Victorian Gothic building erected by students in 1895 and Carnegie Library built in 1912 with funds from Carnegie Foundation. the business school at Johnson C. Smith is moving up in rankings and by urban university standards, The school has a lovely campus.
ADDRESS: 100 Beatties Ford Road, Charlotte, NC MAP
PHONE: 704-378-1000
WEBSITE: http://www.jcsu.edu

Freedom Park
Festival in the Park, sponsored by the Afro-American Cultural Center, is a preferred park venue under spreading oak trees along the banks of a lake; its also a favorite for by Black community picnics year round.
ADDRESS: 1900 East Blvd, Charlotte, NC MAP

Young Mens Institute Cultural Center
DESCRIPTION: Built at the behest of Cornelius Vanderbilt as a necessary adjunct to the famed Biltmore Estates; it housed African craftsman that built his estate and furniture; these men were schooled in building crafts of the English and French Estates; this building was were they ate, drank, slept, and entertained; Vanderbilt ultimately transformed it into the Young Men’s Institute, a place where his workers and their children were educated and maintained their African, now American, culture; subsequently bought by African Americans, it has been a school, library, cultural institution, funeral home, doctors and dental offices over the years; a historic Colored hospital, Ritz Social Club, and Grave Park Inn build by African craftsmen, and a Martin Luther King, Jr. Monument are nearby.
DAYS & HOURS: Tue-Sat 10a-5p
ADDRESS: 39 South Market Street, Asheville, NC MAP
PHONE: 828-252-4614
WEBSITE: http://www.ymiculturalcenter.org