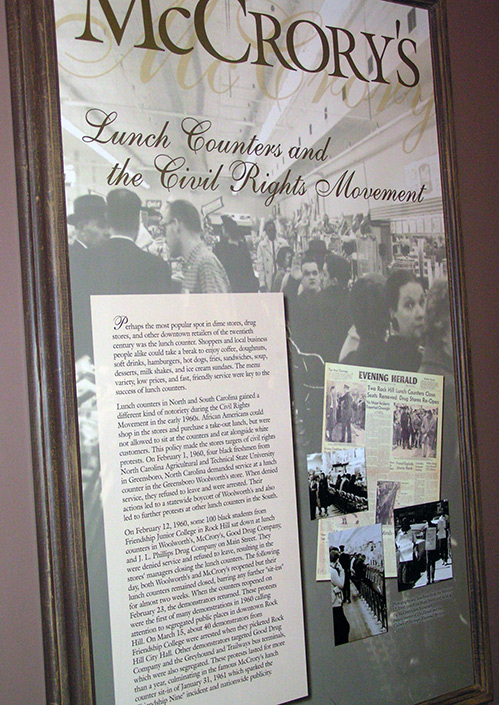 The Alexander Family exemplified Charlotte’s role in the Civil Rights Movement. Zechariah Alexander owned Alexander Funeral Home, a center of community and political activity in Charlotte’s Brooklyn/Second Ward neighborhood. He taught his sons, Kelly and Fred that they had a responsibility to work for better African-American opportunities. In the 1930s, Fred Alexander was devoted to registering African-Americans to vote. He lobbied for the appointment of black police officers and mail carriers. He was also a founding member of the Citizens’ Committee for Political Action established in 1932 to increase political participation by African-Americans.

In 1940, Kelly Alexander became president of the Charlotte branch of the NAACP. Charlotte Observer called him “Patriarch of the North Carolina’s role in the Civil Rights Movement.” And in 1962, Fred Alexander became the first black member of the Charlotte Chamber of Commerce and the first African-American in the 20th Century elected to the city council in 1965. Both Alexanders pushed mayor Sam Brookshire to desegregate Charlotte’s parks and public facilities.

That civil rights milestone, along with black dentist and Presbyterian minister, Reginald Hawkins, leading hundreds of Johnson C. Smith students on a protest march against segregated businesses exerted pressure to desegregate hotels and restaurants in 1963. In November 1965, Fred’s home along with those of his brother Kelly and other activists, was bombed. But in 1969, he was victorious in obtaining the legal removal of a remnant of Jim Crow -– the fence separating all-white Elmwood Cemetery and all-black Pinewood Cemetery.

Charlotte also contributed a signature event in the national Civil Rights Movement. In 1957, amidst controversy and high tensions, four African-American students entered previously all white schools in Charlotte. Meanwhile in January 1963 after a court order, Harvey Gantt became the first African-American to desegregate Clemson University, South Carolina. And in 1965, five years after the Charlotte and Mecklenburg County school systems merged, Vera and Darius Swann sued the school system for not allowing their son to attend the school closest to their home, which was primarily populated with white students.

Race relations began changing with the times. In 1983 Harvey Gantt was elected Charlotte’s first black mayor, where he held office for two terms – a major achievement for a city with a black population of 25 percent. During his administration, Charlotte experienced one of its greatest periods of prosperity. By the late 1980’s, the First Union (now Bank of America) and Wachovia helped Charlotte grow into the second largest banking center in the country, after New York City. In 1990, Gantt contested Jesse Helms in North Carolina’s U.S. Senate race. Gantt lost the election to Helms, but won national acclaim and respect from voters of all races for promoting honest dialogue on the state’s race relations.

Today, Charlotte considers itself to be a part of the New South with a feverish pace construction. Unfortunately, many historic sites in the black community have been lost to economic development and gentrification. For every historic Excelsior Club preserved, which hosted many civil rights meetings in Washington Heights, a Second Ward School, the first black public high school in Charlotte from 1923 to 1969, was lost.

You can also see a taste of Charlotte Civil Rights Movement history at the Levine Museum of the New South.