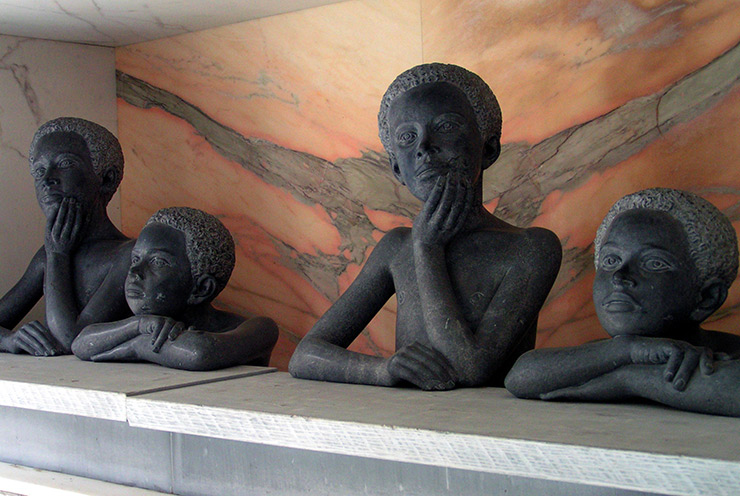 Though its hard to see the connection, this is a Denmark Vesey Memorial in Charleston; (c) Soul Of America

Some historians mislabeled the Plan of Uprising Against Slavery as an Insurrection, but that dishonors the man who sought freedom for people in horrible bondage. Nor does such a negative term suggest the motivations, courage and intelligence of the man. Perhaps this summary will shed some light.

Captain Joseph Vesey, an old resident of Charleston, commanded a slave ship that traded between St. Thomas and Cape Français during the American Revolutionary War. In 1781 he took a cargo of 390 slaves, one of whom was a boy of fourteen who stood out for his intelligence. Being African, the Captain adopted him as his cabin servant while shipmates adopted him as a pet. Gradually, officers and shipmates evolved the boy’s name to be Denmark. His responsibilities and rights grew during his period of servitude. Surely his resentment of the slave trade grew as well. Nevertheless, Denmark served the captain faithfully for many years, traveling all over the world and learning to read and speak various languages. He aspired to embrace the full range of his humanity.

Taking the last name of his former master, Denmark Vesey worked as a successful carpenter in Charleston, and became greatly respected by people of color. Inspired by his adventurous background and various passages of the Bible concerning the freedom of a people, Denmark Vesey began distributing anti-slavery pamphlets among Charleston’s colored population. Denmark was not accustomed to the degrading practice of bowing and cringing in the presence of whites, which surely earned him resentment by others. He encouraged slaves to read and free their mind. When overheard by African Americans, he sought opportunity to converse with white persons to criticize slavery. That was the measure or a courageous and intelligent man! Nevertheless, Vesey pretty much went along without any followers until in 1820. 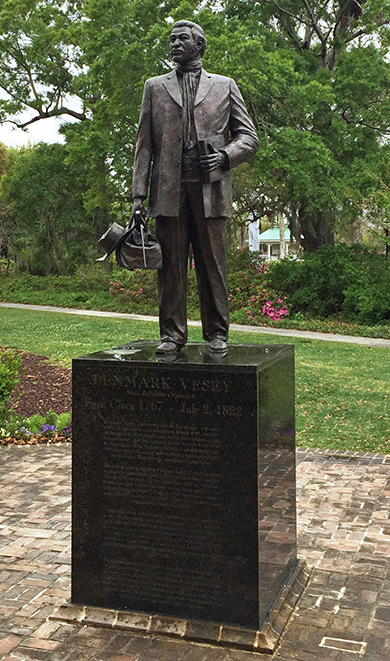 In 1800, he drew a prize of $1,500 in the East Bay Street Lottery, with which he purchased his freedom for $600. In that year, the City of Charleston suppressed three large congregations from merging into a single huge African Methodist Church, due to slaveholder fears that such a church would be too large for slaves to attend along side free persons of color. Christian slaveholders wanted slaves to embrace Christianity, but economic interests came first. In the slaveholders view, slaves might get uppity and demand their freedom, which would ruin their gravy train.

The law was a slap in the face and a clear violation of the Constitutional separation of church and state. As such it became the catalyst for an uprising against slavery led by Denmark Vesey due to his courage, intelligence, freedom and influence as an African Methodist. Most of the plan of uprising was developed with assistance from members of Emanuel AME Church’s Hampstead congregation, where Denmark Vesey was active. Vesey was not the sole leader of record. Two comrades, Gullah Jack Pritchard, an African priest from Mozambique, and Monday Gell, both wrote two letters to the president of Santo Domingo seeking support for the anti-slavery uprising.

As required for the plan to work, Vesey proceeded to communicate details among select church members and allies for what would have occurred in July 1822 — the largest uprising against slavery in American history. It is not surprising that for 3,000 people to be involved in the secret uprising, all ears that heard could not be trusted.

On 30 May 1822, George Wilson, a favorite slave informed his master of the uprising involving thousands of free and enslaved blacks in Charleston. Wilson probably received a special reward of loyalty from his master. The slaveholder informed Charleston authorities, who moved quickly to arrest suspected leaders.

Following a trial, Vesey and 36 others were hanged. On the day of Vesey’s execution, state militia and federal troops had to be called to quell a large demonstration by Vesey’s supporters. Despite arrests and sanctioned beatings, many African Americans defied authorities by wearing mourning symbols as they witnessed the executions of Vesey and the others. This plan of uprising forever changed Black-White race relations in the South. Lawmakers quickly passed a series of more restrictive Black Codes in all southern states restricting the movements of both slave and free persons of color. Worst of all, the less egregious form of Southern slavery transformed into the brutal, inhumane form of Chattel Slavery.

Chattel Slavery continued 40 more years in America, but thanks to Denmark Vesey, Jemy, Gabriel Prosser, and Nat Turner to name a few, inclusive history reveals that people of African descent organized to fight back against slavery from long before and after the Revolutionary War and Civil War. The complex nature of slavery’s racial circumstances made it unfortunate but inevitable, that innocent blood was also shed during these incidents.