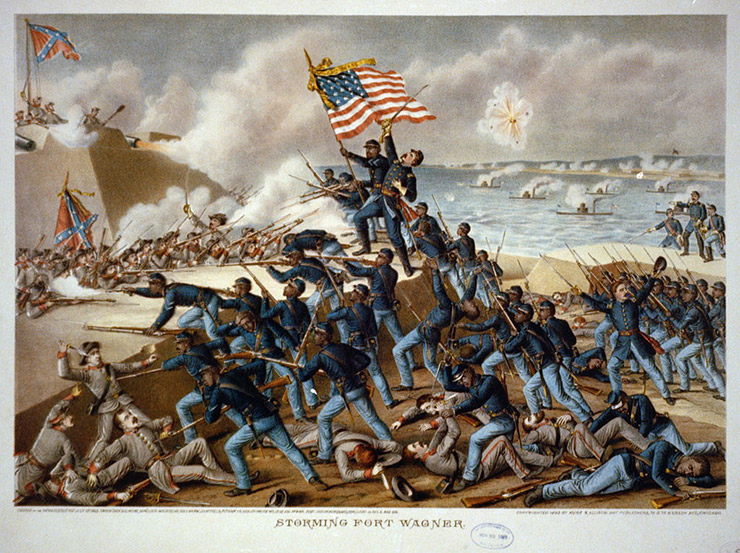 On 17 July 1862, Congress passed the Confiscation Act declaring all slaves of Rebel masters FREE who joined the Union military. The 1st and 2nd South Carolina Volunteer Regiments of Colored Troops were soon formed. Both regiments fought successful raids into the interior of Georgia and Florida. Still President Lincoln was afraid to let the Union raise a large Black army saying “to arm the Negroes would turn 50,000 bayonets from the loyal Border States against us that were for us.”

In July of 1863, about 600 men of the 54th Massachusetts Colored Troops were lead by Colonel Robert Gould Shaw to capture Charleston, SC. In order to do that, they first had to take Fort Wagner, a Confederate stronghold on Morris Island guarding the harbor’s entrance. Like nearby Fort Sumter, it was generally considered impenetrable by ground forces. Shaw came from a prominent abolitionist family in Boston and two of his Black troops were the sons of Frederick Douglass. Contrary to recruitment promises, Black soldiers were paid $3 less than white soldiers pay of $10 per month. 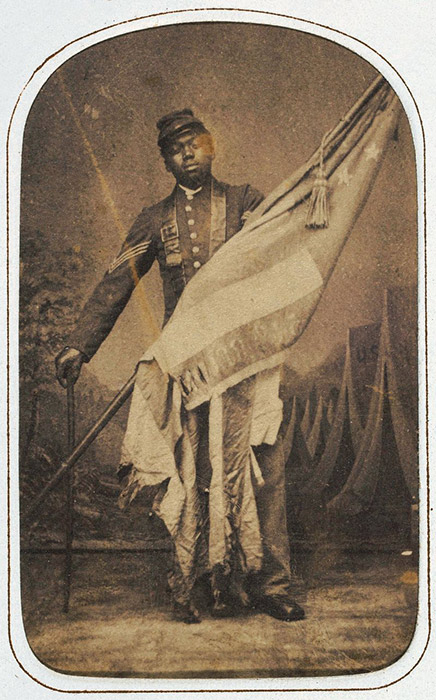 Though understandably disgruntled, as shining Black heroes they accepted the greater challenge to disprove prevailing white opinion that Coloreds lacked the courage and intelligence to fight for the Union.
Massachusetts 54th Soldier William Harvey Carney photograph 1864

On the morning of 16 July 1863, the 54th Regiment fought alongside white troops on James Island. That night they ferried to Morris Island to prepare their attack on Fort Wagner. The troops were exhausted, hungry and wet, but determined to fight on. The intense fire from more than 1,300 Confederate troops forced the 54th to abandon its position. But before retreating, Sergeant William Carney, a Black man, seized the Union flag. And despite bullets to his head, chest, and extremities, returned the flag to Union lines. His heroism earned him the distinction of being the first of 21 Black men during the Civil War to earn the Congressional Medal of Honor.

Subsequent Union troops tried for two hours to take the fort, but failed. In the end, the Union suffered 1,515 dead, wounded or missing — 256 were Black soldiers from the 54th Massachusetts. The assault on Fort Wagner failed for many reasons, including the facts that no scouts were sent to assess the terrain in advance and the 54th Regiment was not trained to assault a fort from the beach. Yet the assault was a successful turning point for all Black soldiers. It dismissed any lingering skepticism among white soldiers about their combat readiness and earned respect from fellow white soldiers in the same campaign.

Word like that gets around. The 54th Regiment’s heroism led General Ulysses S. Grant to write to President Lincoln in August 1863, “I have given the subject of arming the Negro my hearty support. They will make good soldiers and taking them from the enemy weakens him in the same proportion they strengthen us.” Glory!

The historic Fort Wagner site is on uninhabited, privately owned Morris Island. There are no remnants of the fort left today. This historic coastal property is currently under legal battle to prevent home development on the site.