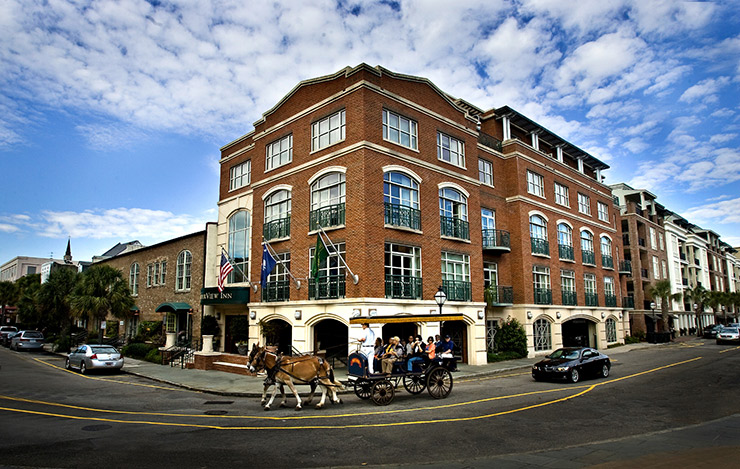 Old Exchange and Provost Dungeon
DESCRIPTION: Built by the British as the Exchange and Customs House in 1771, American Patriots were held prisoner in the Provost during the Revolutionary War. See the Half-Moon Battery portion of the Charles Towne Sea Wall built to defend the colony from pirates in the late 1600s. Some say its one of the three most significant buildings of colonial America. The kids will enjoy Pirate and George Washington Scavenger Hunts.
ADMISSION: Under $10
DAYS & HOURS: daily 9a-5p
ADDRESS: 122 East Bay Street, Charleston, SC MAP
PARKING: on street and paid lots nearby
PHONE: 843-727-2165
WEBSITE: http://www.oldexchange.com

Fort Sumter National Monument
DESCRIPTION: Union forces first occupied the fort on this man-made island in December 1960. On April 12, 1861 Confederate forces at Fort Johnson fired the first shot of the Civil War at Union-occupied Fort Sumter. After a 34-hour bombardment, Major Robert Anderson surrendered and Confederate troops occupied Fort Sumter despite bombardment until 1865. It took so much pounding that by February 17, 1865, when the Confederates evacuated, it was little more than rubble. Ask for a tour by National Park Service Education Director, Michael Allen — Gullah native with a wealth of knowledge about Black military and civilian history of South Carolina.
ADMISSION: Adults $3 and Seniors $2 for Ferry ride
DAYS & HOURS: daily 10a-4p except major holidays, check their website
ADDRESS: board Fort Sumter Ferry at 1214 Middle Street, Fort Sumter, SC MAP
PARKING: paid lots nearby the dock
PHONE: 843-883-3123
WEBSITE: http://www.nps.gov/fosu

Fort Moultrie
DESCRIPTION: Current structure was completed in 1809 and is the third fort on this site; original palmetto log fort was attacked by a British fleet on June 28, 1776 during the Revolutionary War. Colonel William Moultrie’s forces repelled British in one of the first decisive American victories of the Revolution. The National Park Service has restored the interior of the fort. The visitor center features a film with important segments about the Massachusetts 54th Colored Regiment (portrayed in the movie “Glory” and Robert Smalls, a slave who captured a Confederate warship. A 20 minute film runs on every 1/2 hour.
ADMISSION: Cheap; ask for a tour by National Park Service Education Director, Michael Allen — a Gullah native with a wealth of knowledge about Black military and civilian history of South Carolina
DAYS & HOURS: daily 9a-5p
ADDRESS: 1214 Middle Street, Sullivan’s Island, SC MAP
PHONE: 843-883-3123
WEBSITE: http://www.nps.gov/fosu/historyculture/fort_moultrie.htm

Cypress Gardens
DESCRIPTION: Stroll miles of walking trails that wind through beautiful gardens, paddle a flat bottom boat through a real cypress swamp, relax in a House which features native butterflies and plants in all their glory. Or explore an aquarium that offers an up-close look at amphibians, reptiles and fish native to the cypress swamp.
DAYS & HOURS: daily 9a-5p
ADDRESS: 3030 Cypress Gardens Road, Charleston, SC MAP
PHONE: 843-553-0515

Links at Stono Ferry
DESCRIPTION: Located on the Intracoastal Waterway in the beautiful low country, this par 72-course is both a challenge and a pleasure to experience.
DAYS & HOURS: daily 7a-7p
ADDRESS: 5365 Forest Oaks Drive, Charleston, SC MAP
PHONE: 843-763-1817