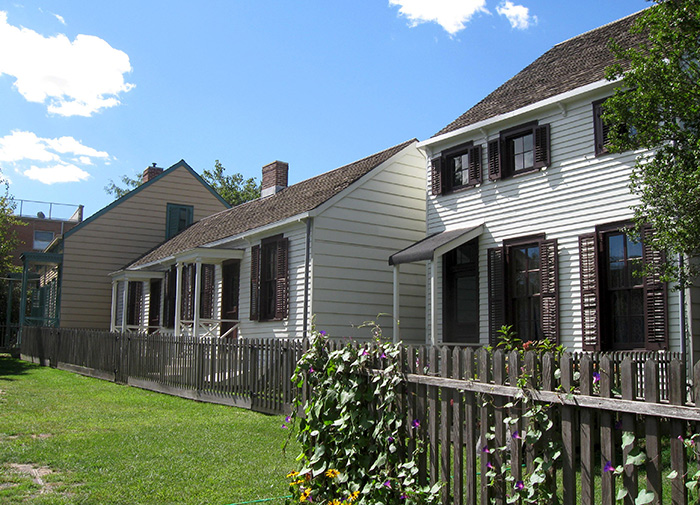 Brooklyn was one of the original six towns of Kings County, when the county/town system was established in 1683. Later, Brooklyn usurped the county to become the City of Brooklyn in 1834. Reportedly 36 million, or one out of seven Americans, trace their roots to Brooklyn. African Americans, beginning as servants and freemen, came to settle primarily in Brooklyn.

The Weeksville Houses, four frame cottages, was formerly the site of a community formed in the early 1800’s by freed blacks in Brooklyn. Weeksville, named after a free black man from Virginia named James Weeks, was settled in 1827 shortly after slavery was abolished in NY state. Now home to a museum, some of these homes are listed on the National Register of Historic Places. Weeksville Historical Society has renovated some remaining of an alley near Schenectedy Avenue and Atlantic Avenue near East New York Avenue.

This community of freemen and the churches they formed helped downtown Brooklyn become regarded as the “Grand Central Terminal” of the Underground Railroad. You can trace the railroad into the basement of the Lafayette Avenue Presbyterian Church in the Fort Greene neighborhood. It is a hallowed place where Harriet Tubman made many stops. After the Civil War Brooklyn’s growth was slightly slower than Manhattan, until the Brooklyn Bridge opened in 1883.

Brooklyn grew to become America’s fourth largest city, were it not annexed into New York City in 1898. Brooklyn and Queens seemed to mosey along as suburbs, waiting for the subway, bridge or tunnel expansion from Manhattan. In the 1910s and 20s Harlem stole all the headlines with its cultural renaissance and homes for African American celebrities.

One landmark event that helped Brooklyn emerge from Manhattan’s shadow was Jackie Robinson integrating the Brooklyn Dodgers and Major League Baseball in 1947. Black folks made sure there were no empty seats in the house as the nation listened by radio and some began watching on TV. When Jackie had a good game, the party was on!

Queens, settled in the same year and short for Queens County, is the largest of of the 5 New York City boroughs. Within Queens, Jamaica is home to large African-American and Caribbean populations along with St. Albans, Queens Village, Cambria Heights, Springfield Gardens, Rosedale, Laurelton and Briarwood districts.

Another landmark event helped Queens emerge from the long shadow of Manhattan — the 1964-65 World’s Fair. The world attended. Coincident with the fair, African Americans began breaking the bonds of Jim Crow Apartheid in employment and housing. Many of them, dissatisfied at being redlined to live in Bedford-Stuyvesant, Crown Heights and Flatbush, moved to other communities in Brooklyn and Queens as their expanding budgets would allow. Some of those communities resisted harshly. The riots of the 1960s increased tensions. African American communities have set up shop in Jamaica and St. Albans, Queens.