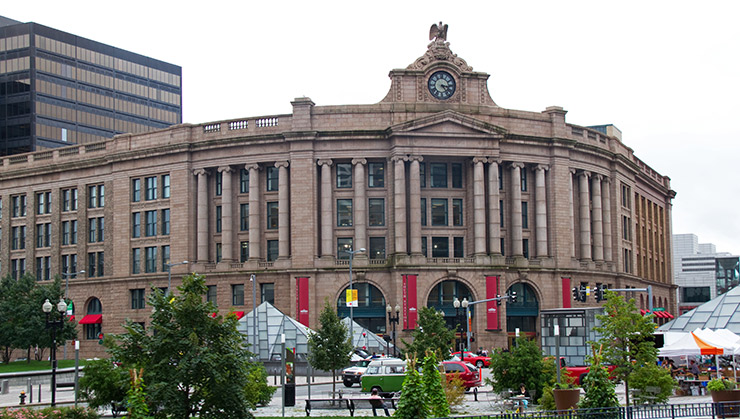 Boston Logan International Airport (BOS) is one of America’s busiest passenger airports with lots of domestic, Canadian and European flights. MBTA Blue Line subway travels from BOS Airport to State Street and Government Center in downtown Boston. BOS Ferry to Downtown: You can also take the ferry from BOS Airport to the Downtown’s Rowes Wharf, which is a viable option to reach waterfront hotels. To reach the ferry, first, visit the nearest information desk in a BOS terminal. AIRPORT TERMINAL MAP

Taxis: From the lower level roadway of BOS airport to the closest points downtown costs $18; to Prudential Center costs about $20. Around town, taxis are usually abundant, but large conventions often draw many of them away from downtown to Prudential Center, Copley Square, and the main convention center near South Boston. Boston Car Rental Center is located on BOS premises for walkable access to airport terminals.

North Station has an Amtrak Downeaster route from Boston to Portland, Maine.

Though delayed by the pandemic, nextgen Acela trains featuring speeds up to 160 mph begin service in fall 2023. They will run more frequently, produce shorter trip times, and include more amenities for an exceptional passenger experience. See Amtrak Acela journey towards world-class service.

MBTA Rail Transit and commuter train service is abundant and a great compliment to this walking-friendly city. Known as the “T”, the nation’s oldest and 4th busiest Metro rail (subway) and light rail system have several downtown Boston stations that are not air-conditioned. They can be hot during the summer. Familiarize yourself with four T lines that intersect downtown and have stations at or near 90% of tourist sites. You’ll want to avoid driving and parking downtown Boston, if possible.

The Green line splits into four (B, C, D, E) branches southwest bound after the Copley Square station, but only the B and E are listed: MBTA RAIL SYSTEM MAP

Major Cruise Lines
Running April-November, the cruise season boasts numerous vessel calls, sailing north along the New England and Canadian coastline, south to Bermuda, or across the Atlantic to Europe. These major cruise lines depart from Cruiseport Boston, which is only 10 minutes from the airport:

Boston Freeways: Central Artery and Ted Williams Tunnel to BOS airport, and bridges have all finally completed. It is now possible to leave BOS airport via I-90, bypass the traffic at Sumner Tunnel and go to Copley Square or points west. Zakim Bridge over the Charles River speeds you to points north of Boston. Memorize these freeways, tollways, and tunnels: