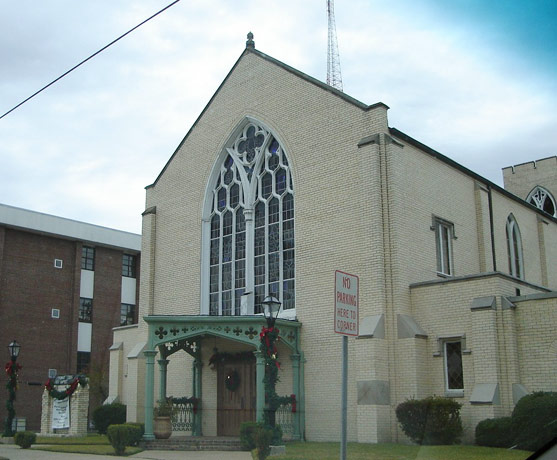 New St. Luke Baptist Church
DESCRIPTION: Founded 1928, it is located in one the oldest sections of Baton Rouge. It also houses the Museum of African American history.
SUNDAY WORSHIP: 7a and 1st Sunday of every month a service is held at 5:30p
ADDRESS: 538 South Boulevard, Baton Rouge, LA MAP
PHONE: 225-343-4411

Magnolia Mound Plantation
DESCRIPTION: Built in 1791, its the oldest and most authentically restored plantation house in the area; this 16-acre French Creole style plantation offers original furnishings and depicts the life of plantation owners and workers during the antebellum (1700 and 1800’s) era; the accounting of slave is told on a special tour called, “Beyond the Big House”; catered luncheons and candlelight tours available by reservation
ADDRESS: 2161 Nicholson Drive, Baton Rouge, LA MAP
PHONE: 225-343-4955

Temple Theater
DESCRIPTION: Built in 1925 as the District Grand Lodge No. 21 of the Grand United Order of Odd Fellows; the Rooftop Garden housed in the Temple, was the center of Black entertainment in Baton Rouge during the 1930’s and 1940’s — Cab Calloway, Duke Ellington, B.B. King, Ella Fitzgerald, Louis Armstrong, and Ike & Tina Turner performed here; the temple is home to the MW Prince Hall Grand Lodge of Free and Accepted Ancient York Masons; On the National Register of Historic Places
ADDRESS: North Boulevard, Baton Rouge, LA MAP

McKinley High School
DESCRIPTION: Opened in 1927, it was the first high school in Baton Rouge for African Americans; for a time it was the only secondary school for African Americans within a 40 mile radius; phased out as a school in 1972, but now on the National Register of Historic Places and a community center
ADDRESS: 1500 East Boulevard, Baton Rouge, LA MAP
Baker, LA

Leland College
DESCRIPTION: Leland began in New Orleans in 1869; after a major storm it reopened in Baker in 1923 under management by the American Home Baptist Mission Society; the remaining buildings on this once proud campus are a stark reminder of the days when this was one of 4 Louisiana colleges chartered for African Americans during Reconstruction; the college closed in 1960, but is listed on the National Register of Historic Places
ADDRESS: Leland College, Baton Rouge, LA MAP

Oak Alley Plantation, Restaurant & Inn
DESCRIPTION: Considered the “grand dame” of plantations because of its structure and design, Oak Alley was built entirely by slave labor and exemplifies the skill and craftsmanship of the enslaved workers; it got its name from the 25 impressive oak trees, estimated to be about 300-400 years old, which line the entrance pathway, forming an alley; part of the property remains a working sugar cane plantation of 1,500 acres
ADDRESS: 3645 Highway 18, Vacherie, LA MAP
PHONE: 225-265-2151

Laura Plantation
DESCRIPTION: Built in 1805, Laura Plantation is one of eight remaining Creole homes where there once were thousands along the river; a sugar plantation for 190 years, Laura is regarded as one of the best presentations of real history maintained to depict true rural life of the day, shying away from the customary representation of plantations and their wealthy, aristocratic owners; standing on 18 square miles of land, 12,000 acres of which were designated as sugar cane crop, the plantation was an Indian village for 300 years (many descendants of those Native Americans continue to reside on the property today), later becoming a blend of Creole, European, West African and Native American cultures; in addition to the main house, four of the original 69 slave cabins exist intact
ADDRESS: 2247 Highway 18, Vacherie, LA MAP
PHONE: 225-265-7690
WEBSITE: http://www.lauraplantation.com

Destrehan Plantation
DESCRIPTION: During Reconstruction, Destrehan was home to the Roose Colony, a large and successful Freedmen’s Bureau colony for refugee freedmen; built in 1787, it is the oldest surviving plantation house in the lower Mississippi Valley
ADDRESS: 13034 River Road, Destrehan, LA MAP
PHONE: 225-764-9315

Port Hudson Battlefield
In the first major combat action by African American troops in the Civil War, two regiments of the Louisiana Native Guards, under Black leadership, led the Union assault on Port Hudson on 27 May 1863; though the battle was lost at this Confederate stronghold, magnificent fighting by the Black troops caused several White Union officers to change their negative opinion about “The Experiment” allowing African Americans to engage in battle; if they had not changed the opinions of those White officers, it is possible that other African Americans would have seen little subsequent combat action
ADDRESS: 765 West Plains-Port Hudson Road, Zachary, LA MAP
PHONE: 225-654-3775

Houmas Plantation & Donaldsonville
DESCRIPTION: Houmas, one of the largest Louisiana plantation in the 1800s, spanned about as far as the eye could see; many of our ancestral enslaved people here were craftsmen, as evidenced by the loving craftsmanship of the ancestors in many commercial and residential dwellings around town; although its hard to pinpoint the location of the original plantation house, you can visit the newer version of Houmas House Plantation – infact, the movie Mandingo and many others were filmed at Houmas House;; more exciting is the reborn Black historic community of Donaldsonville that includes River Road African American Museum, churches, a bed & breakfast, restaurants and a fantastic Blues and R&B nightclub called Hambonz, Railroad Café and The Grapevine; located midway between Baton Rouge and New Orleans; each July 3rd, former residents return home for a reunion celebration and fireworks
ADDRESS: 40136 Highway 942, Donaldsonville, LA MAP
PHONE: 225-746-0004
WEBSITE: http://www.houmashouse.com

St. Paul Free Baptist Church
DESCRIPTION: Established in 1870, it is one of the oldest African American churches in the region. The church moved to its present location in 1922.
SUNDAY WORSHIP: 11a
ADRRESS: 264 Groom Road, Baker, LA MAP
PHONE: 225-775-6744