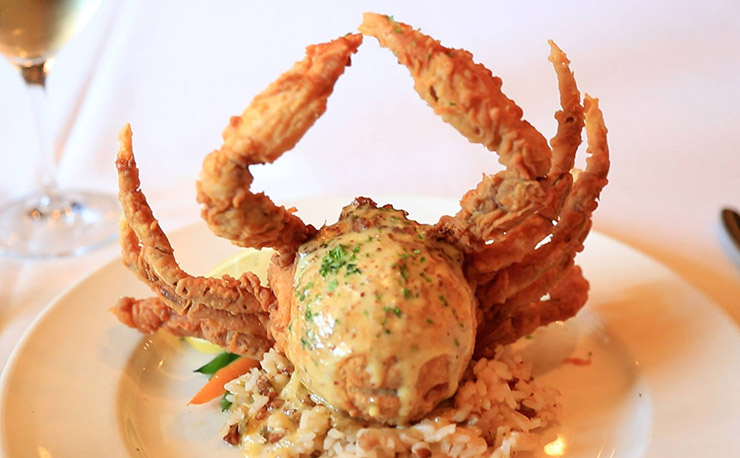 Baton Rouge is the largest city close to the heart Cajun country in Southwest Louisiana, so you expect big props to this fine cuisine. You will not be disappointed, especially at Juban’s Restaurant.

Cajuns are historically bayou swamp dwellers of primarily French-Acadian and Native American descent, but the backstory is more of a gumbo. In 1765, Cajuns, which is a corruption of the term “Acadians”, were forced to migrate from that region in Canada. They settled in Louisiana, but to this day they maintain a derivative of the French language. They were typically farmers, fur trappers, hunters, and fishermen. They came to know the swamps like the back of their hand. Consequently, these are the folk you want as your Alligator Tour Guide and playing Zydeco Music.

Since Cajuns were poor, their cuisine depended on what was available on or near the land: cornbread, greens, okra, molasses, onions, green peppers, shrimp, salted meat and beans became staples. Only people living along the coast had seafood, and rice until near the 20th century. Boiled crawfish became a signature ingredient because those delicious little critters grow in the bayous and swamps in abundance.

Cajuns make great company to enjoy boiled crawfish and other country-based, Cajun cuisine. This cuisine is more earthy with an emphasis on larger portions and less on presentation compared to urban-based Creole cuisine. Unlike the French roux, Cajun roux is made with oil and flour and the bisque is made without cream. Though this cuisine draws from many ethnic constituents, we can all thank celebrity chefs Paul Prudhomme and Emeril Lagasse for promoting Cajun cuisine via their cookbooks, grocery products and TV appearances.