Maryland Crabs at Home and the Inner Harbor 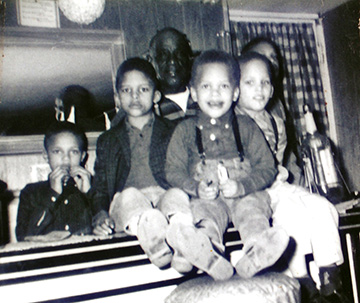 Happy is the visitor to a Baltimorean’s home for a feast of Maryland Crabs. The recipe is simple. Only the mustard spices are secret. People in the know boil crabs in huge pots with one or two cans of beer, lots of Old Bay Seasoning, and a touch of vinegar. When done, we eat the crabmeat as is or dip it in spicy mustard. Part of the enjoyment is arriving early to watch your host pull Maryland Crabs from a bushel, then transport the uncooperative crustaceans to an oversized pot of boiling water.

In childhood, I remember a ride for ice cream cones with Granddad. Afterwards, we stopped at a crab shack on South Monroe Street in Baltimore to buy a bushel of blue-colored live Maryland Crabs.

Once home, Grandmother took half of the bushel of live crabs for first boiling. My four brothers and I went to play with fire trucks and army men in Granddad’s party basement. Minutes later, he returned to the basement with the bushel for us to tip over and watch the crabs’ mad scramble across the floor. Granddad grabbed the critters foolish enough to venture behind his well-stocked bar. One drink in, Granddad had a hearty laugh and glint in his eye with each catch. Some crabs locked claws with others. They were the easiest to catch. In his 40×20 foot basement, we spent a half hour retrieving the miniature clan. As Granddad taught, we grabbed them from center-behind to avoid being clawed. Raucous fun was had until the last critter was retrieved from under the couch where we played and later napped. 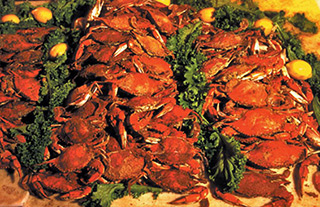 Before extracting crabmeat from the now orange-brown shells, Granddad, a proud veteran of these events, taught us to wear our bib with pride and hammer with precision. I remember the first time he yelled, “Don’t eat the Deadman.” For those who don’t know, that’s excrement stored inside the rear of the crab’s shell until its expelled. After we carefully separated tender white crabmeat from the Deadman and sucked moist crabmeat & juices from each claw, our taste buds exploded. Wow !!!

Since our gathering was on a hot & humid summer day in Baltimore, intense sweating accompanied the affair. Sniffing each shell’s caked-on seasoning cleared nasal passages. Ever the thoughtful hostess, Grandmother kept plenty of napkins and paper towels around to wipe our brow and nose, as much as our mouth. Sometimes the napkins had crab imprints on them – a nice touch and nicer memory.

Typical of those times, Granddad & Grandmother invited friends over for Saturday crabs — usually to celebrate the end of a month’s hard work – his as Maryland’s first Black Teamster, hers as a widely respected housecleaner for some of the wealthiest families in town. Their block on West Saratoga Avenue soon ran out of parking spaces. Hypnotically attracted to the aroma, next door neighbors, Mr. Monroe and his wife, made an impromptu visit with beer in-hand. The chilled cases of National Beer for adults and Root Beer for kids evaporated quickly. I recall drinking one bottle of beer for every three or four crabs as our clan motored through the pot-to-table procession with intense purpose and fervent delight.

Like many treasured experiences in life, we repeated this ritualistic feast again and again. You may not have the fortune of being invited to someone’s home for Maryland Crabs. No worries, this is crab country. You may have also heard stories about succulent Maryland Crabcakes topped with secret-sauce mustard that makes you wanna holla. For the yearning traveler’s benefit, my son and I surveyed seafood restaurants around the Baltimore Inner Harbor, Fells Point and Canton.

For added purpose to the exercise, I planned a family get-together centered around birthdays and freshly-cooked seafood critters. My mother insisted on a venue where she could watch ships pass by. My brothers wanted a festive atmosphere for adults and kids. I demanded excellent Maryland Crabcakes. Growing up in California, my son tired of my mystical tales about fabulous Maryland Crabs. He just wanted good & plenty.

From many options, our choice was the Inner Harbor favorite, Rusty Scupper. I have to admit, Rusty Scupper was initially chosen to please my mother and brothers. I knew their requests would be met, but I had doubts about the seafood. After all, Baltimore has many great seafood restaurants along and near its waterfront. My doubts were soon put to rest. 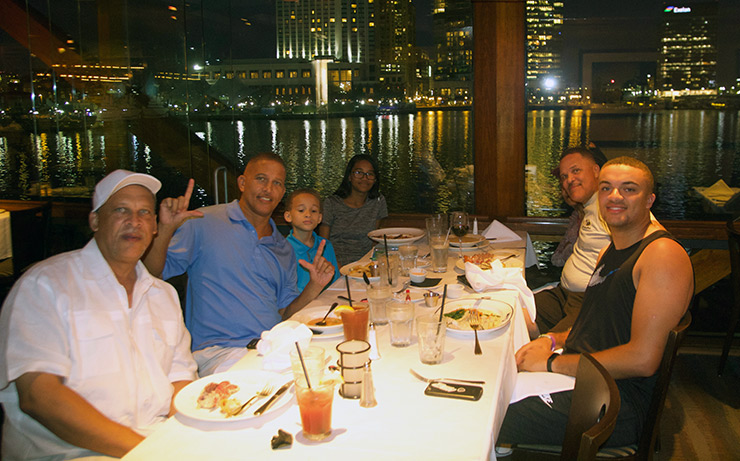 After seeing the menu deeply inspired by Maryland Crabs, we also noted fresh oysters, shrimp, lobster, clams and chicken. At elderly age, our mother has a reduced appetite. So we ordered her a cup of Maryland crab soup with crackers on the side. Wayne decided to risk it and ordered Canadian Lobster tails. I barely had lunch and love all seafood. Without dining restrictions, the entire menu was my oyster, so to speak. How fitting that I ordered oysters for starters. My younger brother Lenny chose the Rosemary Lemon Garlic Chicken and Raspberry Ice Tea. My son David and I ordered Maryland Crab Cakes with lots of gusto in our voices. My niece and nephew ordered from the Children’s menu. Our father Mick and our brothers Michael and Ronald were there in spirit.

There are few times in life when you remember the setting, people, service and meal as one harmonious symphony. This was such a time. 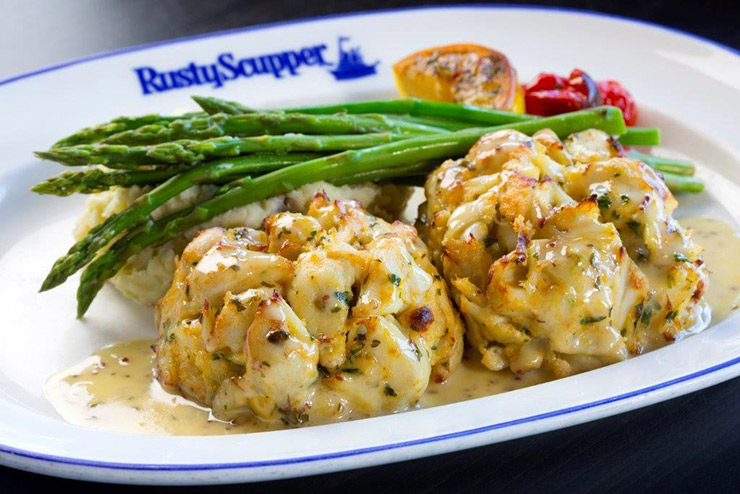 The waitress was attentive and made great dining suggestions. Our orders arrived slightly sooner than expected for such a large restaurant crowd. I may have had Maryland crab cakes as good in life, but never better. They were cooked to perfection with remarkable spice toppings that were 5-star. Wayne chomped down his lobster with a series of purposeful bites to extract every once of flavor. David marched through his crab cakes like it was the Last Supper. Slyly gazing at ships and water taxis passing, Mother was happily content to tease her meal. So I invited myself to finish her delicious crab soup. The kids did what hungry kids do.

It all came together as we sang happy birthdays at a Inner Harbor restaurant event that we’ll cherish for a lifetime. I bet if more people enjoyed Maryland Crabs/crab cakes together, the world would be a better place. Mother Dorsey, Wayne and Lenny at Rusty Scupper with the landmark Domino Sugar sign across the Inner Harbor