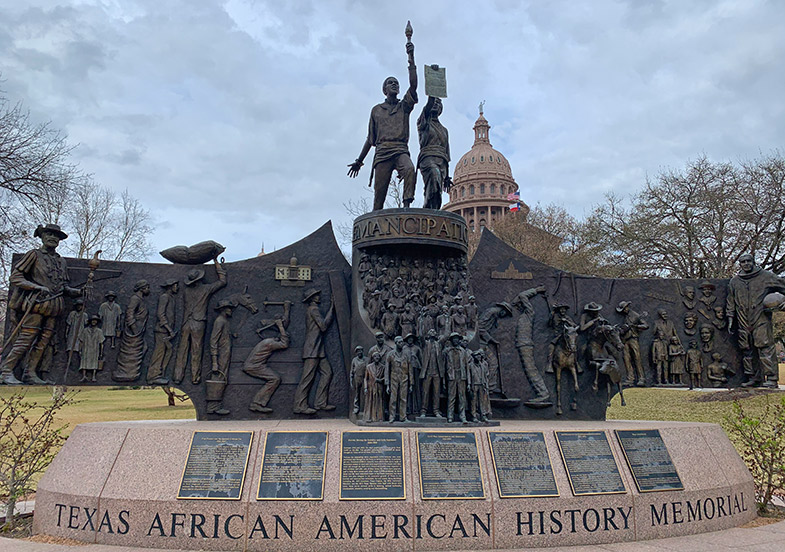 Texas African American History Memorial
DESCRIPTION: Austin Heritage Sites begin with this 27 foot x 35 foot bronze memorial lays out the history of African Americans in Texas with events and figures carved in exact, life-like detail since 2006. Renown sculptor Ed Dwight created this $3 million artwork. At the far left, are carvings of enslaved Africans brought by Spanish explorers to what later became the State of Texas. Moving toward the right, the memorial brings to life slavery, the Civil War, Emancipation, Reconstruction, the Jim Crow South, the Civil Rights Movement leading up to the accomplishments of more recent African Americans. Included are Barbara Jordan, who broke political barriers and Bernard A. Harris, Jr., the first black person to space walk in the cosmos. The dramatic centerpiece of the memorial depicts Juneteenth, with a woman holding high the Emancipation Proclamation as a man holds a torch by her side. Check out the back side of the memorial for more detail.
ADDRESS: 100 West 11th Street, Austin, TX

Barbara Jordan Statue
DESCRIPTION: Bronze and larger than life, a statue of Barbara Jordan stands just beyond the West 24th Street entrance to the University of Texas at Austin. Jordan lived a life of firsts – first African American elected to the Texas state senate after Reconstruction and the first Southern African American elected to the U.S. House of Representatives. She was a civil rights activist, legal giant, and accomplished orator. Noted politicians today still invoke her famous words: “My faith in the Constitution is whole, it is complete, it is total.” She carried a copy of the document with her at all times.
ADDRESS: 307 West 24th Street, Austin, TX

Dedrick-Hamilton House
DESCRIPTION: In the late 1800s, freed slave Thomas Dedrick and his son, William, built this modest house that stands next to the African American Heritage and Cultural Facility. Thomas was one of the first freed slaves of Travis County and a leader in the growing black community. The city restored the building in 2006, the simple design an ode to the past of East Austin. To the side of the house stands “Portraits of our History”, a mural of Black Austin residents painted by Ryan Runcie.
ADDRESS:

Wesley United Methodist Church
The church opened in 1865 in East Austin with an early congregation composed of freed slaves. With a dirt floor and wooden benches for pews, Wesley attracted growing numbers of African Americans. In 1882, church leaders broke ground on a new building, which the congregation eventually outgrew. Another new building was constructed in 1929 at a cost of $50,000 ($800,000 in 2021 dollars). The church has served as classroom space for Huston-Tillotson University, the launching place of the Austin Area Urban League, and headquarters for other non-profits that promote the history and culture of East Austin. A blue plaque in front details lynchings in Travis County, a somber reminder of the terrors of slavery and the Jim Crow South.
ADDRESS: 1164 San Bernard Street, Austin, TX
PHONE: 512-478-7007
WEBSITE: https://wesleyunited.org/