“A Voyage to Soulsville”
DESCRIPTION: John Fisher’s tribute to his late infant son, John, Jr., is a breathtaking mural on the back wall of the George Washington Carver branch of the Austin Public Library. Two stories high, the mural maps out the many ways the African Diaspora has shaped the world. You can stare at the work for hours and still miss many of the thoughtful depictions of black culture. They include the Stone Heads of Mexico, sculptures created about 900 BC by the Olmec civilization, considered to be of African Origins. At the very top sits Mahala Murchison, who at 10 years old was the first slave brought to Austin in 1839. Her image is surrounded by tiny faceless figurines that represent the prison laborers who built the Texas State Capitol in downtown Austin. Mr. Fisher was a student of the accomplished and world-renown African American artist and educator John Thomas Biggers. Mr. Biggers was known for his larger-than-life sized murals condemning discrimination and celebrating the culture. Fisher’s mural in Austin follows in that vein. If you’re lucky, you’ll catch him paintbrush in hand, continuing to perfect the masterpiece that pays homage to John, Jr.
ADDRESS: 1161 Angelina Street 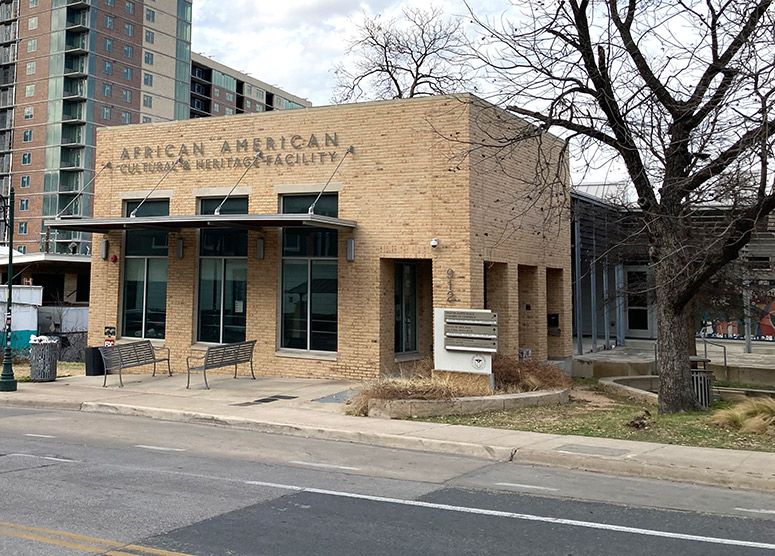 African American Heritage & Cultural Center
DESCRIPTION: The city of Austin created this complex to pay homage to the rich past and culture of African Americans. Organizations housed here include Greater Austin Black Chamber of Commerce; ProArts Collective, which produces theater and arts festivals and the African American Technical Resource Center, which provides resources for public art endeavors, including theater, writing, music and dance. An exterior wall glistens with a tile mosaic of the people, places and events vital to the history of Black Austin. Among the noteworthy is The Honorable Azie Taylor Morton, who worked in cotton fields as a child and rose to become the 36th treasurer of the United States. Others include educators, politicians, civil right activists and professional athletes. The mosaic was created by African-American artist Reginald C. Adams.
ADDRESS: 912 East 11th Street, Austin, TX
PHONE: 512-974-2424
WEBSITE: http://www.austintexas.gov/aachf

“Rhapsody” Mural
DESCRIPTION: This artwork shows the best blend of Austin culture and community. The 50-foot long piece shows saxophonists blowing for all they’re worth and a vocalist belting her heart out. It’s a tribute to when Black Austin was known as one of the hottest entertainment zones in the region. The mural also depicts three boys fixing an upturned bike. That was a classic scene of everyday life here.
ADDRESS: 1021 East 11th Street, Austin, TX 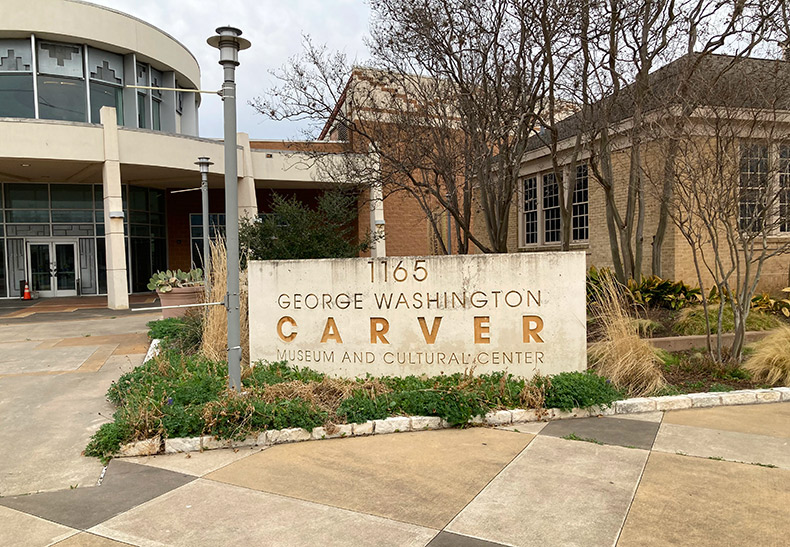 George Washington Carver Museum and Cultural & Genealogy Center
Through exhibits and art, the center showcases the African American heritage of Austin and beyond. The center also provides genealogical and technical resources to help people trace their personal heritage. When not closed by the pandemic, the center’s core exhibit is “The African-American Presence in 19th Century Texas”, which provides a multi-sensory experience. Two art galleries feature works of a rotating slate of artists. As a cultural hub in the neighborhood, the center played host to classes, camps and performing arts. And it also provides digital programming, called “Carver Museum at Home.
ADDRESS: 1165 Angelina Street, Austin, TX
PHONE: 512-974-4926
WEBSITE: george-washington-carver-museum-cultural-and-genealogy-center